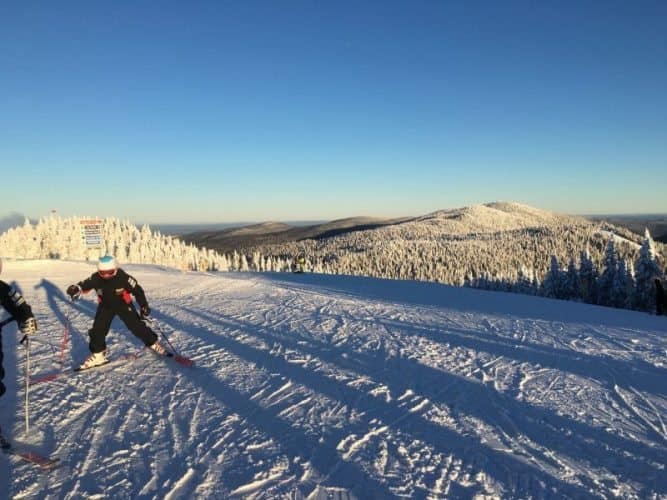 One January night, I had a nighttime adventure in the deep dark woods of the Laurentian mountains in Quebec.

Our group of 21, ranging in age from 6 to 65, met up at the base lodge of Mont Tremblant and were fitted for snowshoes, then we took the gondola straight up to the windy, snowy summit of the mountain.

In a single file, as the afternoon light waned and clouds drifted in front of the setting sun, we entered the forest full of snowy trees close by our faces and we snow-shoed down and around a one-kilometer track.

Our destination was the Refuge de Trappeurs, in the Versant Soleil area of the large ski resort, a rustic cabin restaurant with gas lighting, and a cozy wood stove.

Here, two friendly cooks had the beers and wine ready, and the cheese already bubbling for the fondue.  A table was spread with salads, sausages, vegetables, and sliced ham.

Using the narrow fork, and twisting as we removed them from the cauldron, the delicious fondue went down easily. It was a hearty repast fit for such a rustic and isolated cabin, at the top of the 2800 foot mountain.

After the cheese, it was time for the chocolate. Strawberries, bananas, and pineapple were laid out on the table and we dipped the pieces in melted chocolate. After everyone was fully sated, with plenty of wine and beer to fortify us, it was time to don our headlamps and start the trek down the mountain, about 4 kilometers.

It was a little harder going down than on the flat summit, in places the trail was steep, and more than a few of us landed on our butts. I even fell over backward while shooting a video of the trail!

It was a winding, steep in places trail but the full moon above the Laurentians cast a glow on the line of snowshoers.  The combination of the cold winds, the delicious repast, and the long hike made this a memorable evening, and one I’d highly recommend.

Tremblant is a big ski area, the biggest in Quebec, with 95 trails, 14 lifts, and sometimes, a few too many skiers.  One tip that many skiers told me was to stick to the top half of the mountain and enjoy shorter runs up there, instead of coming all the way down where the longest lines are.

On my visit, there was plenty of artificial snow cover, and they never turned off the snowmaking machines, which sometimes provided a little nervousness when I’d ski right through a snowstorm of fine snow coming out of the blasting nozzle.

Conditions were for the most part pretty good, though having a little more natural powder would have been even better. Happily, I didn’t encounter any ice patches, the dreaded scourge of eastern skiing in the US.

Tremblant is a name that covers many things in this part of Quebec. The town nearby is Mont-Tremblant,  the name of the ski area is Tremblant, and the mountain itself is Mont Tremblant.

Tremblant is an easy 90-minute drive north of Quebec, and it’s pretty easy to get to. There’s even a small airport that serves the region with scheduled service to Toronto and other Canadian cities.

Some of my fellow travelers said that the small village surrounding the base of Tremblant is similar to Vail in Colorado, with no cars, pedestrian streets lined with shops, restaurants, and pubs.

Of course, there is a shop that sells poutine, that favorite food of this region, composed of french fries, cheese curds, and brown gravy.  You can get it with duck at the Fairmont here or simply indulge in this rich flavor with the regular ingredients.

There is a central clock tower in the middle of the village, and a slope that is lit up at night for snow tubing, which is terrifically fun. TIP–You can go faster with more people and it’s more fun using the ski trikes than the tubes, which we learned after a couple of runs.

The entire village complex is full of some of the friendliest people I’ve met in a resort–as so often is the case, the Canadians just have that way about them. The whole village didn’t exist until 25 years ago, today it’s all owned by Intrawest, the ski conglomerate who also own Stratton Mountain in Vermont and Steamboat in Colorado, among others.

Skiers who are looking for very steep terrain won’t be that happy at Tremblant, as the trails skew toward intermediate. Some of my fellow big mountain skiers said that what they might consider an intermediate, or green trail, here might be given a black diamond designation.  One feature that all skiers like here, however, is Tremblant’s First Tracks program.

This gives some skiers a chance to start skiing at 7:45 am, a full 45 minutes before the rest of the pack.  On a powder day, making those first tracks is what morning skiing is all about!

For people who are new to the big mountain, there is another great feature which are more than 100 volunteer guides, easily recognized by their yellow jackets with big? on the back.

We enjoyed learning about the mountain and getting some good pointers from my volunteer, Jean-Paul Ouellette, who said he spent decades as a Montreal detective before he retired to live near Tremblant.

These days, Jean-Paul still gets in 75 days of skiing in every season.  He said he and his retired compadres enjoy helping visitors and their fluency, (like everyone we met here) lets him converse with most of Tremblant’s visitors in French or English.  Many of the skiers here come from Toronto and Montreal, and some come from Europe.

We were lucky to stay right at the base of Tremblant, in the very comfortable Sommet des Neiges, which are condominiums and rentals that provide plenty of room and a full kitchen in all units. The resort has more than 1900 rooms all near the slopes so it’s quite easy to find such convenient lodgings here at Tremblant.

Other Aqua Club La Source amenities include a heated jacuzzi and outdoor pool, fitness center with personal trainers, and a game room.

For skiers who might prefer the Nordic variety of recreation, there is a top-notch groomed cross-country area called Ski Du Fond, an easy drive from the lodge. Sadly, the manager here told me that while there is plenty of snow for xc skiing now, there is not a substantial base, so this season will be a short one, versus in previous years when the area was blessed with more snow.

The area has 90 kilometers of trails which are nicely groomed.

One of the best advantages for American travelers, these days in 2016, is that the US dollar is about 35% better than the Canadian dollar. I found this out when I parked in a Montreal garage for five days and had a total bill of $115.

Later my bank statement told me that it was only $84, which shows how much less it costs for us than for the Canadians.  Go now while you can save!

Find out more about Mont Tremblant at their website.