“The duck, the salmon, and the pig
Have given their lives
To provide my lovely breakfast
At the Chateau Frontenac.”

Just two days in Quebec, and I’m writing poetry in French, celebrating my lovely breakfast of duck pate, lox, bacon, and sausage, with some lovely strawberry jam [confiture] from a confiturerie [jam maker] on the Ile D’Orleans.

There are more than one million reasons to visit Quebec, but the first one has to be the food. Why? Well because they’re French, and the French have always had it hands down over the English in preparing and serving food.

I’m ensconced at the Fairmont Chateau Frontenac for four days for the Le Fete de Nouvelle France (the New France Festival) and Quebec City Tourism, and it was an invitation that I would never pass up in a million years.

The Chateau Frontenac, a masterpiece of the Gilded age, built by the Canadian Pacific Railway in 1893, towers over the historic walled city like a stately colossus. It is the most photographed hotel in the world.

New York architect Bruce Price incorporated Medieval and Renaissance features in his design to blend with the architecture of the Old City, founded in 1608.

Churchill and Roosevelt met here with Canadian Prime Minister MacKenzie King to plan strategy during World War II. Albert Hitchcock filmed a movie here, (I Confess, 1953) in which the hotel was a central feature. Princess Grace of Monaco and Queen Elizabeth II both visited here, as did Sarah Bernhardt and Errol Flynn.

Charles Lindberg famously landed his airplane on the nearby Plains of Abraham and strode into the hotel to deliver medicine to his friend Floyd Bennett, who was suffering from pneumonia.

At the Chateau Frontenac, I had a chance to really kick back and enjoy the most splendid destination in North America.

The hotel has just had a thorough renovation to brighten it up without affecting its historic character. They have enlarged the luxurious spa, the fitness center and the pool area, replaced carpeting wallpaper and room decor, and improved their facilities for meetings and conferences.

Before long, I was inspired to venture outside with Quebec’s best guide, Sharon Frenette!

All the historical and cultural sights are a short walk away. There’s the Upper City and the Citadel up on the cliffs, where the one-percenters — the nobility and the clergy — lived back in the day.

The riffraff like you and me lived down below by the port in the Lower City.

In the Upper City, you can see the park of Joan of Arc, the Parliament Building, and the Plains of Abraham, where General James Wolfe marshaled his troops on that fateful morning in 1759 when the British took the city and put an end to French rule in North America.

Quebec has been besieged many times in its long history, but General Wolfe was the only one who ever took it. Legend has it that he saw some women climbing down the cliffs, to wash clothes in the river.

The next morning, Wolfe had his men scamper up the same way. By the time the French general, the Marquis de Montcalm, got his forces ready, the English had already had their tea and were ready to fight.

In the brief engagement that followed, both generals were killed, but the British took the city and Quebec became, in theory, part of the British Empire, but take my word for it, they’re still French.

The battlefield is a park now, where they hold an enormous music festival in the summer.

The port of Quebec and the historic Lower City can be reached by a tram car, the funicular, or by the stairs, which are quite numerous, but good for you.

The Lower City is a delightful warren of cobblestone streets, art galleries, shops, cafes, museums, hotels and restaurants, with historic murals and street musicians to enhance the experience.

You can amble along the docks of the port city and take a ferry ride and view the city from the St. Lawrence River, as the first settlers did. And then there’s the splendid Cathedral de Notre Dame.

Millions of tourists come from all over the world to experience Quebec City, because it is a truly unique destination, a European walled city in North America, and the people of Quebec have worked hard to preserve the city’s historic character.

There are a lot of visitors, especially when the cruise ships dock there, but the city manages them well and maintains a relaxed, unhurried atmosphere.

The whole city is a UNESCO World Heritage site, and I had a wonderful time taking in the sights, sampling the superb cuisine, riding the funicular, and learning about the city’s history.

Quebec was founded by Samuel de Champlain in 1608, but Jacques Cartier wintered over there back in 1545. It was once the capital of New France, a trading network that covered two-thirds of North America.

The best time to go, for my money, is during the New France Festival in early August, when people dress up in period costumes and there are all kinds of presentations and reenactments to give visitors a sense of what life was like in Quebec in the 1600s.

Many Quebecois are decked out in period costumes: lots of beruffled aristocrats in waistcoats and knee breeches and their ladies in elaborate gowns and coiffures, and soldiers and trappers and blacksmiths and Native Americans and bourgeois like me.

I was fitted out for a costume, which was tremendous fun because some of the tourists wanted to take a photo with me!

My costume had a lot of bling — ruffles and satin and gold lace — but it was blue, to distinguish it from the burgundy outfits worn by the nobility.

So I was “new money,” but hey, I’ll take it. New money is better than no money at all.

We attended one of the splendid banquets held nightly on the Quai de Pionniers, where we enjoyed five sumptuous courses paired with sprightly local wines. With sprightly dancing girls performing in between.

Montreal is a truly bilingual city where menus and signage are in English and French. In Quebec, the primary language is French, and people here place great importance on preserving their historic heritage. The New France Festival and the Carnaval de Quebec held in winter are part of what keeps Quebec French.

I had the opportunity of discussing this subject with Stephan Parent, the executive director of the New France Festival.

He explained that the educational component of the festival has to be combined with performance art, and music, and reenactments, and family history, to create a combined effect to recreate the city’s heritage.

In other words, the history of New France is packaged in pageantry with a parade and fireworks, and costumes to stimulate the imagination.

This year, the theme was to “Celebrate our Builders,” and there were many historical interpreters to tell the stories of the people who came to the new world for so many different reasons: soldiers, trappers, nuns, and monks.

Presenters also brought to life the stories of the “Filles de Roi,” the women who came here on a royal ticket to take their chances with the men of Quebec. Let the record show, most of them ended up in happy marriages.

When you go to Quebec City, as you must, be sure to leave time to tour the Ile D’Orleans, an island on the St. Lawrence River known as the “Garden of Quebec.”

The island, which is about 20 miles long and five miles wide, is reached by a bridge from the mainland, and the road that runs around the perimeter is dotted by little villages with farms and artisan studios and art galleries.

Here we toured a confitururie, a 17th-century manor house, a vineyard, and a farm that grows black currants used to make wine, and sweets, and a delicious liqueur known as creme de cassis.

At the confitururie, Tigido, we met Vincent Paris, the confiturier, and sampled some jams made from the luscious berries that abound on the island.

At the Manoir Mauvide-Genest, we were transported back to the household of a wealthy doctor in the colony in the 1600s, and all the housewares and artifacts and costumes, as well as the architecture and decorations of the house itself, really gave a vivid impression of what life was like in the early years of the settlement.

At the Cassis Monna et Filles, we learned the many wonderful uses of the black currants they grow there.

Founded by Bernard Monna in 1971, and now run by his daughters Anne and Catherine, the farm is known around the world for its award-winning wines, liqueurs and syrups.

We met with Anne and Bernard, who described their plans for a major renovation of their farm and restaurant.

We also visited Vignoble de L’Isle de Bacchus, one of the many vineyards that take advantage of the ‘micro-climate’ on the Isle d’Orleans, which was originally named the Island of Bacchus because of the grapes that were already growing there when the first French settlers arrived.

Manager Jackie Gilbert explained that the mists of the St. Lawrence River protect the hillside vineyards from abrupt changes in temperature and allow for a longer growing season. She said the island’s northern climate also allows them to produce ice wine, which is made from grapes that are frozen while still on the vine.

On the final evening of our stay in Quebec, we dined with M. Parent at the Frontenac’s Champlain Restaurant and were dazzled by a magnificent seven-course dinner created by Chef Stephane Modat, building our word power still more. Can you say canard avec asperge et navets puree?

M. Parent said next year’s festival may emphasize Quebec’s status as a port city, and perhaps stage a reenactment of the siege of Quebec in 1690 when the city was attacked by a fleet commanded by Governor William Phipps of Massachusetts.

When Phipps sent envoys to ask for his surrender. the Count de Frontenac famously declared, “I have no response for your general except from the mouths of my cannon,” and he drove off the British fleet with a well-aimed cannonade.

I must say, as a Boston boy, I found my own reception much more congenial.

While the New France Festival is great fun, Quebec is a wonderful place to visit any time of year. They have festivals all the time, so many that the city is known as “La Ville Festive.”

And besides the Chateau Frontenac, Quebec has more than 12,000 places to stay, ranging from luxury hotels like the Auberge Saint-Antoine and the Art Nouveau Clarendon to small family-operated inns.

For further information, visit websites for 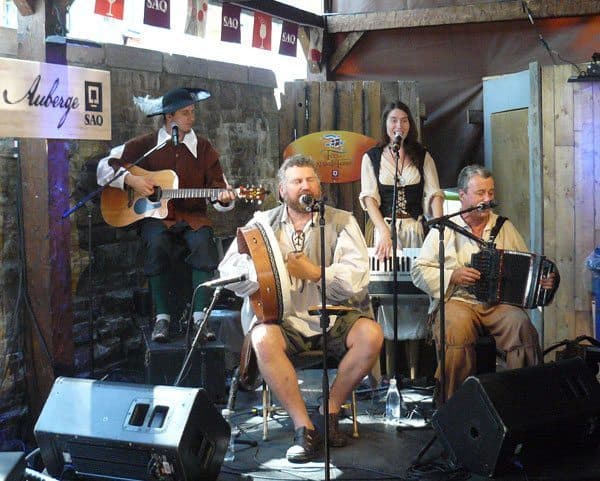 Pourquoi Pas, a band from Ontario, rocks the New France Festival in Quebec: