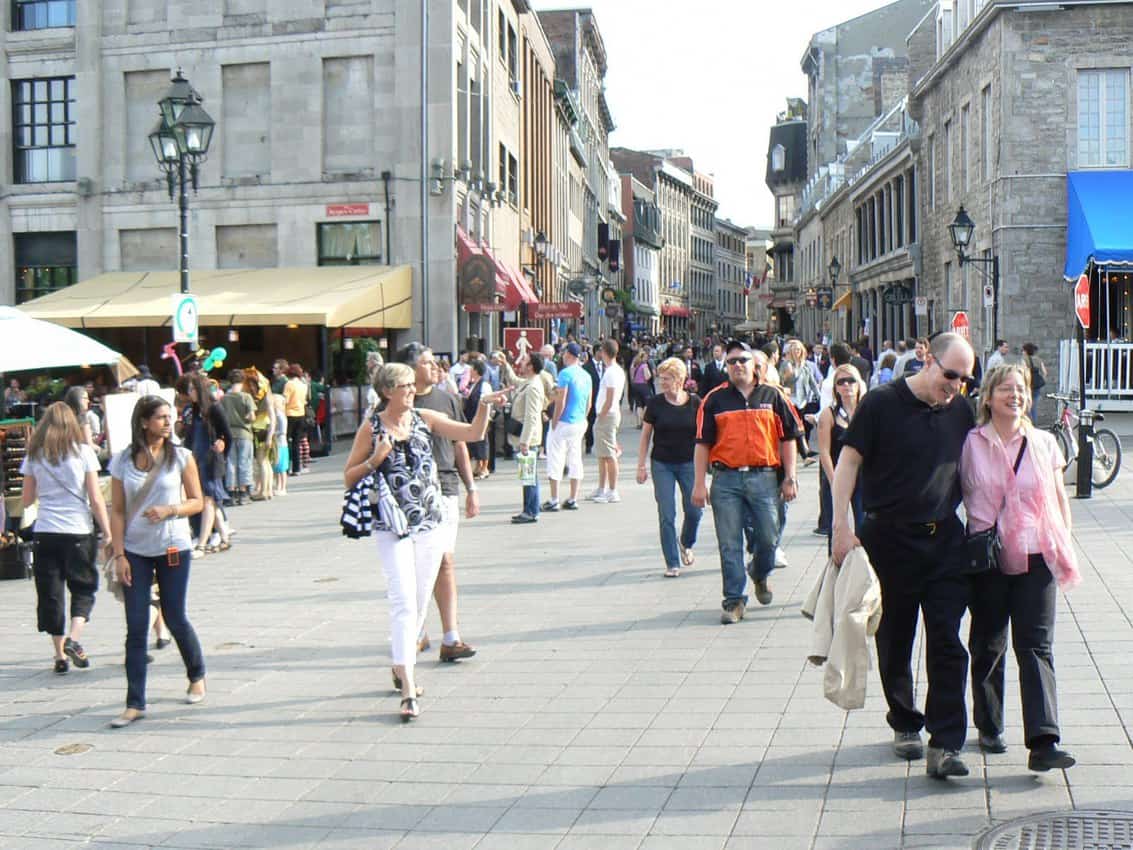 Quebec: A City for All Seasons

Quebec is a city for all seasons because of its geography and because of its people. Surrounded by mountains and the mighty St. Lawrence River, it rises on a cliff 350 feet high called Cape Diamond.

Only ten minutes from the city is Montmorency Falls, higher than Niagara and gorgeous even in winter when it freezes to a giant cone of ice that people call the pain de sucre (sugarloaf).

Quebec and its nearby parks are a playground for every kind of sport. Its population is French-speaking but many also speak English and all of them enjoy the changing seasons, switching sports and celebrating whatever the weather brings.

And whatever the season, they love festivals, art, music, and good food. Quebec has more than 2000 restaurants, more per capita than any city in Canada.

As I write this, maple trees throughout the province are aflame with autumn colors. Next month, flights of snow geese will fill the sky on their annual journey south. A nip is in the air, but the streets are only slightly less filled with visitors than in summer.

The winter tourists come to ski, snowboard, and ride snowmobiles. Some stay in lodges in the nearby Laurentians where trails are cut through the snowy woods and every tree branch is etched in white. Others stay in Quebec City. Some even stay in a nearby Ice Hotel.

Personally, I would rather come in from the cold to sleep – preferably after thawing near a comfy hearth, with a mug of hot cider at hand. And so, I think, would most of the Quebecois.

But they revel in winter and there are plenty of things to do right in town, like cross country skiing, snowshoeing or taking dog sleds through the snowy streets.

People line up to toboggan down the slide at the end of Dufferin Terrace, the long clifftop boardwalk at the edge of the Old City.

The annual Winter Carnival, the world’s largest, will take place in late January and early February and it is packed. There are be fireworks, impressive ice sculptures – maybe even a sculpted ice palace, parades and marching bands, horse-drawn ski races and yes, even canoe races on the frozen St. Lawrence. (They push the boats across!)

Spring comes suddenly in April when the city turns from white to green. The river thaws and the boats come back. Flowers bloom in gardens everywhere and in the Old City, they burst from window boxes and hanging baskets. Bikers and hikers take to the trails and ice cream cones are popular on Dufferin Terrace.

Spring melts into summer as the tourists return in force. The pubs and cafes on Grande Allee spill out onto the sidewalk where the merriment lasts into the night. In the Old Town, restaurants are filled.

I visited Quebec last summer with a group of friends and we ate our first meal in the city’s oldest house, built-in 1675 and now a delightfully cozy restaurant, Aux Anciens Canadiens.

The whitewashed stone building resembles the houses still found in Normandy and Brittany, the birthplace of many of Quebec’s first settlers. The menu is authentic too – meat pies, boar and pig’s knuckles ragout, pure maple sugar pie with cream, for instance. We ate with relish and fortunately, our hotel was an easy walk away.

On the subject of restaurants, I should mention another – Le Saint-Amour – whose menu offers a sophisticated cuisine. This restaurant has always had a reputation for fine dining.

It was recently redesigned and after an apprenticeship at some of the best restaurants in France, the son of the original chef has returned to take his father’s place. Frederic Boulay deserves the accolades he’s received for his avant-garde culinary art.

On the Plains of Abraham

But to get back to summer pleasures in Quebec. Music fills the air – in the streets and in the parks, including on The Plains of Abraham where, as part of the 400th Anniversary of the celebration of Samuel de Champlain’s founding of the city in 1608, free concerts were given in July and August 2008, by Paul McCartney and native Quebecoise Celine Dion. Each of them drew over 200,000 fans.

The Anniversary Celebration started in May and ended in October. That year Quebec’s annual Summer Festival was part of it.

The Summer Festival runs for 11 days starting in early July. People converge to hear music from North America, Europe, and Africa. As yet unknown groups are discovered and all the venues are outdoors. The Plains of Abraham are rockin’.

I remember this much about The Plains from my grammar school American history. They were the scene of the final battle between the forces of New France and England.

The battle took place on a field belonging to a farmer named Abraham. It lasted for only twenty minutes and both generals were killed but it was a British victory and as a result, Canada became an English colony in 1763.

Nevertheless, Quebec, a UNESCO Heritage City, is just as French as ever. The city long ago outgrew its old boundaries, but its walls, rebuilt twice in the last 400 years, remain. The old city, Vieux Quebec, is the only walled city north of Mexico and it contains the historical heart of Quebec.

The Castle on the Hill

Walking is without question the best way to see a city – and in Quebec, it’s doable. But the streets are sometimes short. They turn and twist, go up and down and some are charmingly cobblestone. You need a map.

I didn’t have a map when I decided to take off on my own. I asked for directions and was told to use the Chateau Frontenac as a beacon. This made sense. The Frontenac was also my hotel!

In fact, rising as it does from the highest point above the river, with its slanting green copper roof and pointy towers, it should be the most recognizable landmark in town, and it is.

But I had started from below the ramparts on the other side of the cape. I don’t think it was even a mile that I walked along the river past cruise ships large and small, peering anxiously upward and hoping I was going in the right direction. Then I saw my beacon up a hill and through the trees. I knew where I was and I felt a little sheepish about having doubted.

I spent three hours exploring the old lower town at the bottom of the cliff where Champlain built his first “habitation” in 1608.

This place, a pedestrian area, contains the greatest concentration of 17th and 18th-century buildings in North America. Many of them have been turned into shops and restaurants and often the owners live on the upper floor. Some are tacky souvenir stores. Many have beautiful things. Most restaurants have inviting sidewalk tables.

I visited the tiny Notre Dame des Victoires, built-in 1699, and rebuilt in 1759 after an American bombardment. I sat in a park listening to a young woman who played the flute. And I ambled through every street.

After looking at the Casse-Cou (Break Neck) stairway to the upper town, I chose to ride the Funicular railway to the top. The glass-enclosed cabin delivers passengers to Dufferin Terrace and the Chateau Frontenac in about two minutes. I was home and very glad to be there!

Tired, hungry, and decidedly disheveled after my explorations, I marched into the gracious precincts of the hotel’s St-Laurent Bar and Lounge and was seated at a table with a river view. I ordered a bowl of French onion soup. It arrived in a white tureen and it was the most exquisite onion soup that I, a connoisseur of onion soup, have ever tasted.

The Fairmont Le Chateau Frontenac was named after Louis de Baude, Count of Frontenac who governed New France in the late 17th century. While residing in a palace on these very ramparts, he gave frequent balls at which he loved to dance the minute.

The Chateau was first a Canadian Pacific Hotel, opening in 1893 with 170 rooms. There have been additions and renovations through the years, the latest being a major renovation just completed.

Today there are 619 rooms and suites with high-speed internet access and flat-screen tv, five restaurants, and a large, stately lobby. On a lower floor are a street of boutiques, a health club, and an entrance to Dufferin Terrace.

The huge lobby is stately, but so comfortable, largely due to a friendly, accommodating staff, including a resident dog named Santol who was trained as a guide dog and is willing to accompany hotel guests on walks.

The Frontenac is the icon of the city, so much so that guided hotel tours have become a popular attraction. This place has been host to countless celebrities, royalty, stars of stage and screen, heads of state, and my parents, who visited in the ‘40s and ‘50s and always spoke of the Frontenac whenever they spoke of Quebec.

Mary O’Brien is a travel writer and editor for newspapers and magazines. She lives in the Chicago area, but she’d rather be on the road.