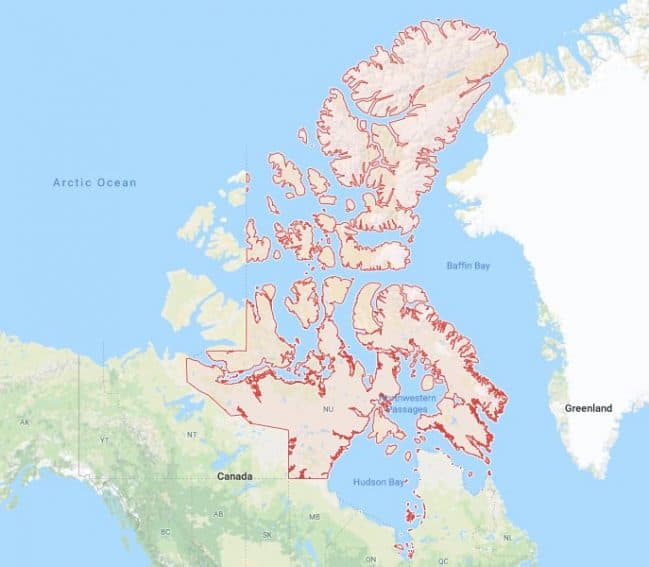 Home of the Inuit is the Newest, Northernmost Territory Of Canada

Max Johnson was introduced to Nunavut for the first time when he traveled there in 1980; he has been captivated by the region’s simplicity ever since.

Nunavut is the northernmost territory of Canada, and also the newest and largest. It was separated from the Northwest Territories in 1999, creating a new province.  Despite its vast size, the region is sporadically populated.  The people who live there are Inuit, among Canada’s first nation peoples.

“The region itself can be probably best described as an area the size of Europe with 23 communities of about 1,200 to 1,500 people in each of them,” Johnson said.

The Great Canadian Travel Company was founded and run by Johnson for 35 years, specializing in northern Canadian travel. Johnson describes himself as being extremely involved with his company until he decided to sell the business a few years ago.

Even after retirement, Johnson still has an appetite for Canadian travel, working as a consultant for the Nunavut government developing tourism strategies and policies with the Qikiqtarjuaq community.

“It’s a place that the small elements of life become incredibly important and I think that’s an expression of living a life in a very distant place,” Johnson said.

While Johnson has a great fondness for the land, he’s not afraid to deem it “pretty strange” to the rest of the world.

Now known as Nunavut, the region has been providing a home to its indigenous population for around 4,000 years.

It wasn’t until April 1, 1999, that Nunavut officially was separated from the Northwest Territories and became an official territory on the Canadian map. In Inuktitut, the Inuit language, Nunavut translates to “our land.”

Traditionally, the Inuit people were nomadic. During the 19th century, the Hudson Bay Company came and began putting up forts and trading posts, leading people to settle.

Most of Nunavut’s communities reside on the ocean because they are traditional hunting communities whose greatest source of protein comes from the sea.

The majority of the population in the Nunavut region is made up of its indigenous Inuit people. Johnson estimates probably 90% of the massive area’s inhabitants are indigenous.

Johnson describes Nunavut as “an area that is so impossibly difficult to survive in for most of us, that it’s developed a mystery and an aura– and to a point a pretty closed personality.”

Entering a Nunavut town immediately leaves you with a sense of being in a very traditional, small community, according to Johnson. The culture is very much based on the land.

“The people who live in North still live a life that is much, much more attached to nature than anything that you or I could possibly understand,” Johnson said.

Even within their artistic expression, they make use of nature’s elements, whether it be soap carving, animal bone carving, or the beautiful traditional clothing made out of caribou and seal skin.

“When they take animals, they use everything,” Johnson said.

The remoteness of the land doesn’t just inspire their lifestyle, but their personalities too. Johnson says the Nunavut people are very quiet, which he thinks is because they’ve been in an isolated community for so long. He wouldn’t exactly call them shy, but instead reserved people.

“They’re people who understand their own lives extremely well and are cautious of outsiders for good reasons,” Johnson said. “Outsiders have tended not to bring very good news over the years.”

Visitors may initially perceive the Nunavut people as reserved, but they often find the community warming up to them as time passes.

After community members develop an awareness of their visitors, they are incredibly welcoming and keen to share knowledge of their world– which can be incredibly eye-opening to outsiders.

“I go up there fairly frequently and I just marvel every time I go there at their ability to live,” Johnson said.

Nunavut is still a relatively new area and is just being to develop a tourism infrastructure. One the reasons why it has little tourism is because it’s so difficult to get to, but that’s starting to change.

Over the last five years, cruise ships have started exploring more arctic areas. Cruise ships have been “the biggest game changer in Arctic tourism,” according to Johnson.

“The coast is perfect territory for expedition ships, and as climate has changed it’s made more of the waters of the arctic accessible,” Johnson said. Well, at least that’s one thing climate change has been good for!

“As more people wanted to go to Antarctica, they have more ships and they need something to do in the summertime, hence more people going into the Arctic,” Johnson said.

Northern-based European ships can spend November to April in Antarctica and sail home to do engine work in April. Around June they can look around Scottish islands, leaving a window of time from July to October to explore Canada.

With a growth in the number of ships, they compete to go to new, exciting places, like Nunavut.

Cruise ships will provide a great fix for Nunavut because accommodation is a problem in the Arctic.

While Johnson mentions that he knows of a handful of beautiful resort facilities, like Arctic Watch and Arctic Haven, most communities only have tiny hotels designed for government officials and construction crews– not the ideal tourist spot.

The cruise industry can handle this problem because cruise ships have a BYOB policy: bring your own bed. Letting passengers stay on the ships while they get to explore Nunavut during the day saves they from missing out on the stunning region.

“There have been three primary groups of tourists into Nunavut,” Johnson said. “The first are the cruise passengers, the second are hunters and fisher-people, and the third are people who are looking for arctic adventure.”

Johnson said if he had to pick his top recommendations out of all the wonderful parts of Nunavut, his favorite four spots would be Bathurst Inlet, Naujaat, Iqaluit, and Qikiqtarjuaq.

When you fly into Bathurst Inlet, there isn’t a functioning community but instead a lodge and houses for about 20 Inuit workers who service the lodge during the season.

“The interesting thing about Bathurst is that it’s in a community that was shut down by the government about 15 years ago,” Johnson said.

Despite not being the most populated area, the traditional site allows visitors to get a different perspective of Nunavut.

“It is the best place in the Arctic to get an overall sense of the geography [and] the history,” Johnson said.

You can go fishing, see muskox, visit archaeological sites from thousands of years ago, and experience the beautiful wildflowers when they are in season.

“Get the complete sense of being in an isolated northern environment, it’s absolutely magical,” Johnson said.

Next stop is the hamlet of Naujaat, due north of Winnipeg and lying on the arctic circle.

With a community of around 1,000, the hamlet has a decent tourism infrastructure. They have a co-op hotel, local outfitters, and a great carving industry. The hamlet is great for animal lovers, being home to polar bears, caribou, seals, whales, walrus, and around 100 species of birds.

Naujaat is a relatively accessible, really friendly community that deserves a visit.

Another one of Johnson’s favorites is Nunavut’s capital, Iqaluit.

Having a population of around 5,000 people, Iqaluit is one of Nunavut’s more accessible areas, with two flights a day from Ottawa. Johnson said Iqaluit is a great option “for people who just want to get a taste of the North.”

An hour flight from Iqaluit is Qikiqtarjuaq, which can easily be done in combination with the capital.

Qikiqtarjuaq is a physically beautiful place off eastern Baffin Island, facing Greenland. With a very kind community and access to all types of wildlife, Johnson encourages all to visit “Qik” as he calls it.

Winter time is a magical time to visit.

“You can meet families, you can build igloos. They’ll take you out on the ice and show you where– in minus forty degree temperature– you can find running fresh water,” Johnson said.

With a technique invented hundreds of years ago, they will smile and explain how they lay long lines to fish under the ice.

Johnson is currently working with Qikiqtarjuaq to develop a tourism strategy based in the community. This means allowing the local hamlet to act as a coordinator for events and setting up activities.

“Very simple ones to start off with, going to a local family’s house for a cup of tea,” Johnson said. “You can talk to an Inuit family and you can learn about life in the north.”

More expansive activities include building and spending the night in an igloo just as Inuit people have done for thousands of years.

“You’ll go out there in the afternoon and there will be nothing except an expansive snow,” Johnson said.

Within a few hours, a guide will have built an igloo, ready for you to reside in for the night.

“What we’re doing is asking the community what is it about their lives and their cultures they want to show and they want visitors to experience,” Johnson said.

The beauty of the north

No matter where you go in Nunavut, make sure you bring an open mind and warming clothing.

“The most important thing is to have a really good pair of boots,” Johnson said.

Nunavut isn’t a big elaborate vacation like going to California, Paris, or Australia might be. Heck, it’s not even as booming as rural Alabama, but that’s the beauty of it.

Things tend to be a little slower than people on the outside are anticipating, but it teaches you patience and gratitude.

“If you live in New York then everything has got to be bigger and better and louder and faster if you live in Qikiqtarjuaq the beauty of one seal’s fur will last you for two weeks,” Johnson said.

The beauty of the north, according to Johnson, is the people of the north. Listening to their stories, watching them work, and taking in their culture will teach you more than you can imagine.

“It’s a place to go and listen, and observe, and then watch again because there’s more going on than you could possibly think at the first glance,” Johnson said.

Enjoy Max Johnson’s blog, where he chronicles his travels around the world.