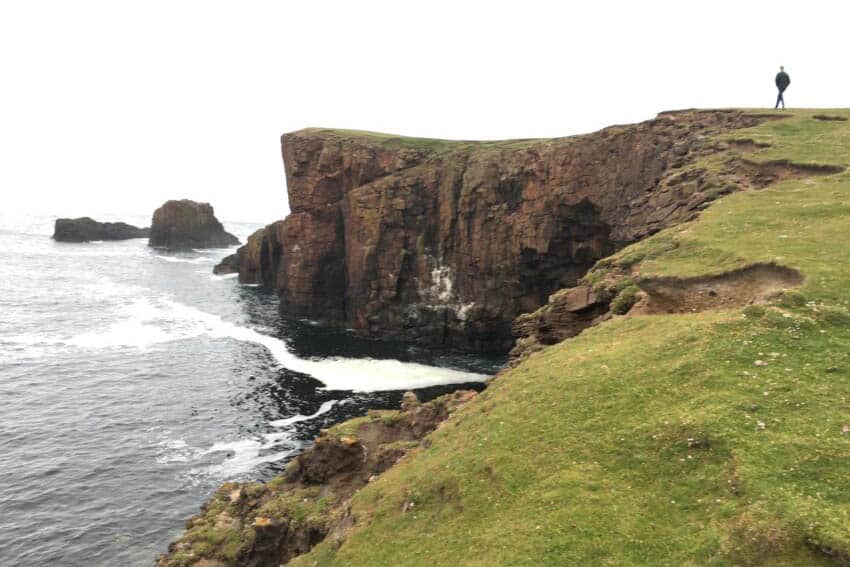 The setting: A remote Scottish island, part of the archipelago ‘The Shetland islands’, with a population of 8, long term residents. No 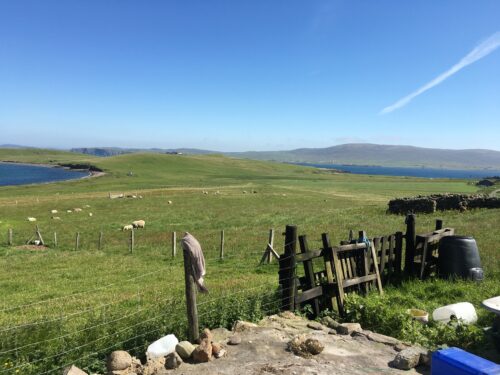 police, no shops, one road and the most beautiful, rugged coastal scenery I’ve seen in my life.

Papa Stour was my cocoon. A part of myself had died when we lost our mother five weeks prior to visiting, and the isolation and remoteness of Papa Stour, had helped me to confront my grief directly in a healthy and productive way.

After my mother’s passing, I needed to disappear and isolate myself for a while before I could be reborn again and return to the world.

Having recently moved back to my family home, signs of my mother’s life were everywhere and although this brought me comfort also did not provide me with any solutions of how to adapt to her absence.

Papa Stour was a vital part of my grieving process, and I will forever be grateful for the peace it brought me.

My mother had received her diagnosis of bowel cancer a year and a half prior to her passing. We were blessed to spend her last moments together, reminiscing about her life and reading letters to her from loved ones. I must remind myself that many people are not able to do this with their loved ones, particularly during the COVID 19 pandemic. No amount of time can prepare you for losing a parent however, especially at 22 years old.

My mother was one of the most charismatic women I have met in my life, always so full of life and love, but also brutally honest when necessary. I remember being young and not appreciating her strict parental approach, but as I grew older, I realized what a great privilege it is to have had a mother who did what is best for us in the long term rather than in the short term.

She was fiercely witty, warm, intelligent and the best baker known to man. When she died, she left a hole in many lives. I have never known someone to be loved not only by so many but so deeply by friends and family. I longed to be able to have shared this experience with her, but in my heart she will always remain. 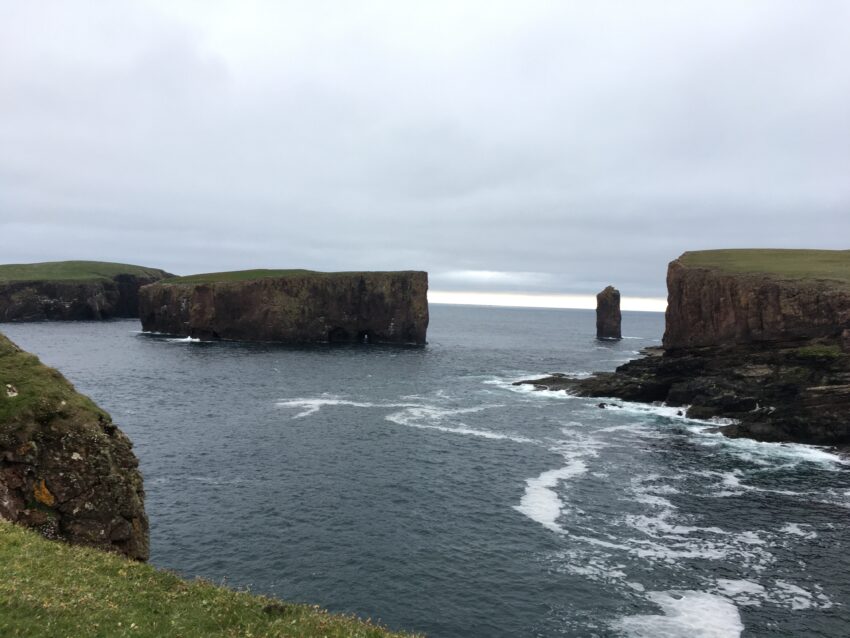 The journey to Papa Stour

As I live in Bristol, a city in the south of the UK, I first made my way to Edinburgh via the mega bus then to Aberdeen via a train. Mega bus is an economical method of transport in the UK where you pay a fraction of the price of other buses and trains. On arrival, I stayed in a Travelodge in Aberdeen, providing me with everything I needed in a private room for a relaxed evening before taking the 14 hour overnight North link ferry the following day.

I recommend taking the ferry, both to save money and to explore Aberdeen beforehand, which has plenty of idyllic spacious parks and areas for water sports. All the buildings in Aberdeen were painted grey which created a juxtaposition to the sunny summer weather.

The idea of visiting such a remote corner of the earth, I saw as a novelty, and few people know that such a remote place exists within the UK. The thought of escaping the humdrum of the city to hear birds and waves crashing to the shore filled me with an inner peace.

The North link ferry makes two stops, the first being ‘Orkney’ another archipelago south of ‘The Shetlands islands’ which, like the Shetlands, is rich in well preserved historic sites. The historic sites are well preserved, due to the peculiar lack of trees which meant there was an increase in using stone for construction rather than wood.

One of Orkneys main attractions for tourists is the ‘Skata Brae’, the most complete Neolithic village in Europe dating back as far back as 3180 BC. On Papa Stour, there also remains the house belonging to the Norwegian ‘Duke Hakon’ which you can visit on the island. 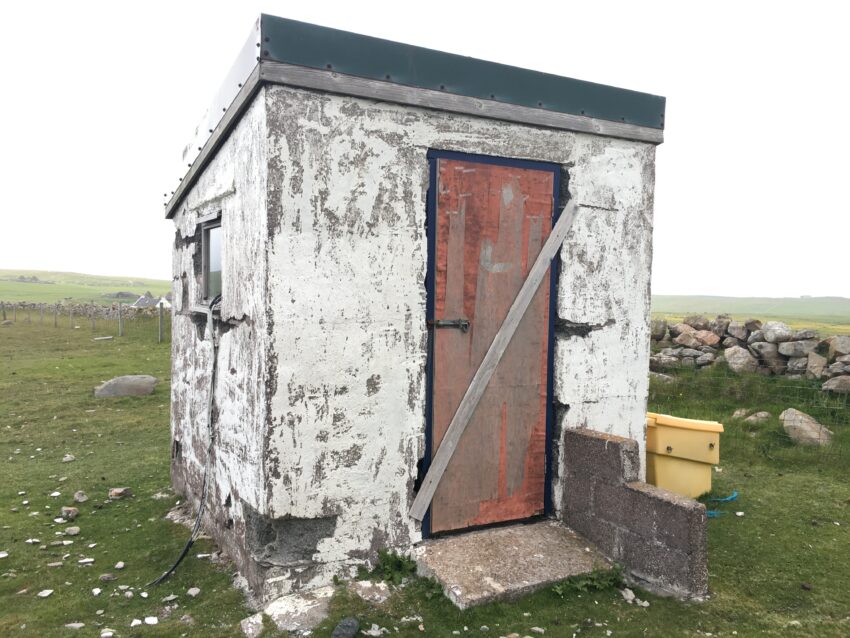 Two Nations in the Shetlands

When I awoke in Lerwick, I noticed the buildings bared resemblance to both Scottish and Norwegian architecture. This is because ‘The Shetland islands’ were under Norse occupation before 1472. Lerwick, is closer in distance to Norway then to Edinburgh, the second most populated city in Scotland.

The trip to Papa Stour required plenty of pre-planning due to the remote nature of the island. The bus from Lerwick to West Burrafirth, the Papa Stour ferry port, only ran on Wednesdays and Fridays and the ferry only runs four times a week. You must book both beforehand (01595 745745) to avoid being stranded. Coordinating this journey pushed me outside my comfort zone as a solo traveler, but also made the trip seem more exciting and worthwhile overall.

When I met my WWOOF host, he informed me about his vision of WWOOFing on his croft on Papa Stour. The aim was to make the island more sustainable, and to grow healthy nutritious food that could be given to local food banks. There were five other WWOOFers currently working at the croft which is an unusually high number compared to my past WWOOFing experience. Clearly the novelty of experiencing such a remote island was appealing for many.

I am a huge advocate of WWOOFing as a way of positively contributing to the destinations you visit, to meet locals and to immerse yourself in the culture outside of the often-shallow tourist attractions of the main cities. The five WWOOFing farms I have visited in the last four years have provided me with such a rich, productive, and meaningful adventure and I would recommend others to try it too. 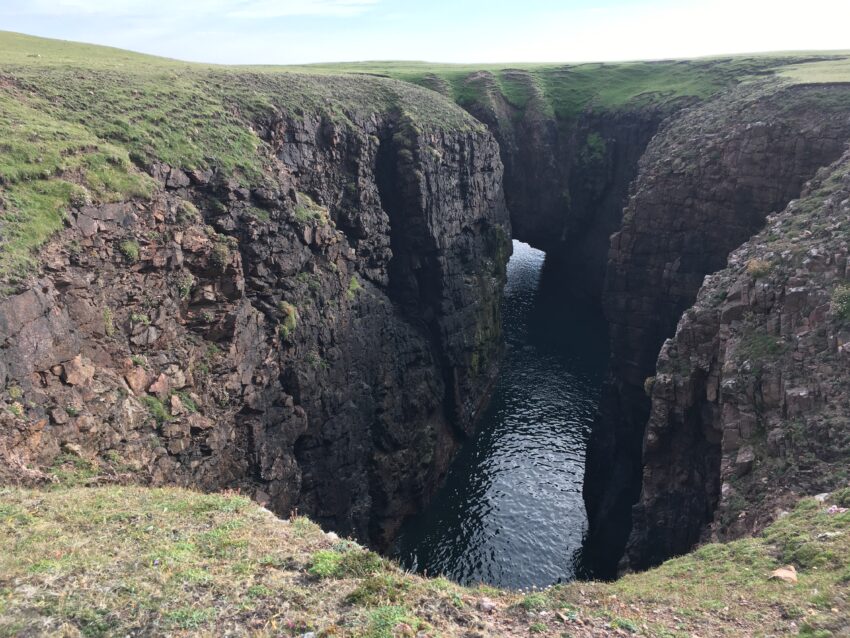 There is a separate WWOOFing website for each of the different countries that have WWOOFing farms. To apply you simply pay a yearly subscription of £20, and then can then message WWOOF hosts with information about yourself and why you wish to WWOOF at their farm, the UK WWOOFING website for example is; https://wwoof.org.uk .

This croft had only recently been open to WWOOFers a couple of months prior to my visit. The projects included constructing a wall from car tyres, rocks, fence wire and cement which had been upcycled from the mainland. The wall was to shelter the vegetables from the wintery stormy weather which we planted with seaweed and nettles, which provide useful plant nutrients.

Birds on One Side, People on the Other

Papa Stour is split into two with half of the island habited with humans and the other solely with ground nesting birds. It is important to be wary of where you are treading to avoid protective mother birds dive bombing you as you walk past but if you survive this you are rewarded with the most breath-taking, dramatic, untouched coastal scenery I have seen in my life, including Kirstens hole, an opening within the island caused by erosion of the land over time.

During one of these walks, we spotted an astonishing amount of litter washed up onto the land in a quantity I have never seen before. This was cleaned up by the WWOOFers which may not have been otherwise due to the low population of people on the island that were able to do this.

We worked from 8-12 pm and 2-5 pm on weekdays. I spent the evenings hiking across the island, watching old VHS videos, in conversation with WWOOFers, reading and playing Kendama, a new hobby I started at the time and have developed an obsession with since.

There have been numerous feuds on Papa Stour between residents which have led to another decline in the population, including the shooting of a dog, vandalism, and disputes on how the now abandoned primary school should be run.

Most residents on the island, had immigrated there in 1973, after an islander who was determined not to let the island die, placed an advert in a national newspaper titled ‘Island needs young people with adventurous spirit. Land and croft houses available.’

Individuals from all around the globe flocked there, but after the feuds on the island, most had now relocated elsewhere leaving the island with a lack of long-term residents. Living with so few people can foster a keen sense of community but when tensions arise things can quickly go south.

Volunteering on an island with as many WWOOFers as there are long term residents, is an incredibly unique experience. You feel as though you and the other WWOOFers are existing in a bubble outside of the world as you know it. From Papa Stour you can also see a one-hectare micronation called ‘Forewick Holm,’ a tiny island in which the ownership is in debate. 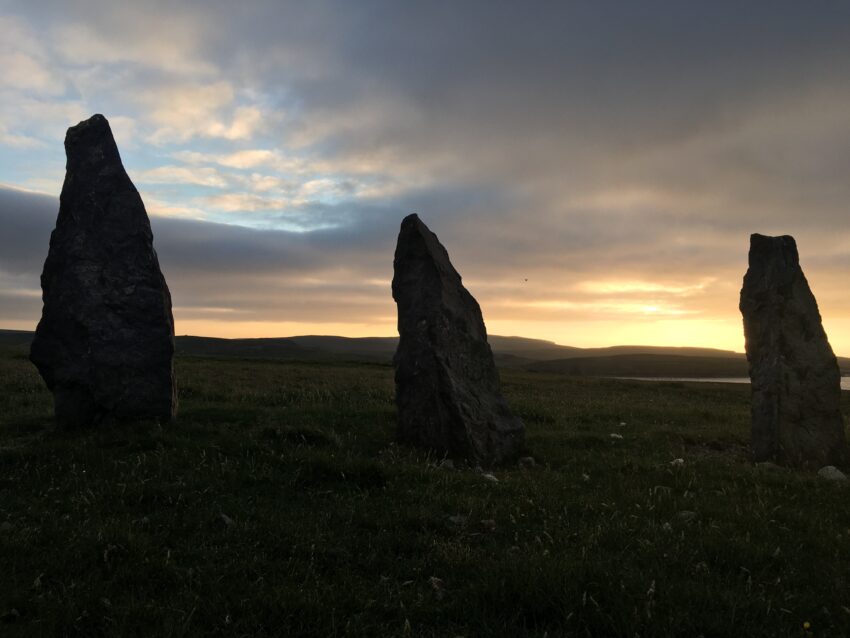 If you are incredibly lucky you may see a puffin or two on Papa Stour, however, it would be more likely that you would see one at ‘Sumburgh head’ in the Shetland mainland. As you walk past any of the numerous hushed beaches you may see a dark shape pop out of the water, which on closer inspection, you will notice are the heads of seals bobbing about which often make their way onto the beaches when the sheep are not there.

Otters live in the rocks by the shore too along with countless species of birds which draws individuals to the island too. 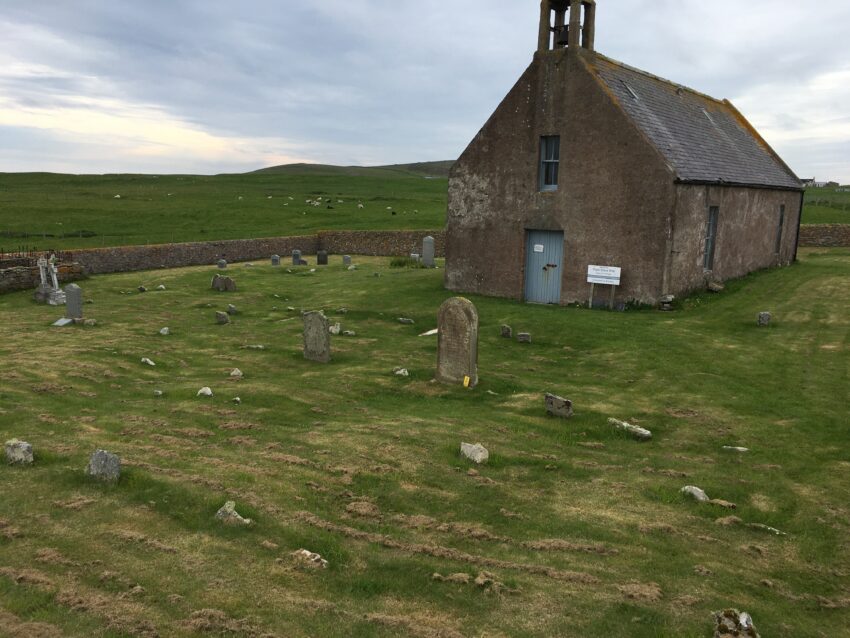 Our WWOOF host was extremely interested in health and encouraged those there to eat as many fruits and vegetables as possible and fostered healthy habits in those who WWOOFed there. He made the rule of no drinking or smoking while on the property which made the interactions between WWOOFers far more raw, meaningful, and inspirational, free from the potentially numbing effect from alcohol.

I came back from Papa Stour feeling like I had so much to look forward to in life, feeling gratitude rather than pain. We never know when our time will end on earth, and I now began to see this as a liberating rather than scary sentiment. My mother’s passing really woke me up to appreciate life and the people that make it beautiful.

There are times in life where stillness and reflection are needed to be the best version of yourself, and this is what Papa Stour provided me with. I am forever grateful for my mother’s impact on my life and everything she has taught me, and I hope that others who have lost loved ones, have a space for stillness too.