The Orkneys: Ancient Megaliths and a Modern Wedding

We made it to the Orkney ferry just in time. My husband and I had left Inverness at 6 AM believing the boat left at 9:30, and upon arriving in the oddly named John O’Groats found our ferry was scheduled to leave at 9.

We were last aboard the small boat that the guide book recommended was not for weak stomachs. For us, it was standing room only.

The Orkney Islands are situated just off the northernmost point in Scotland. The only way to reach the islands is by air or sea. The Northlinks ferry is passengers only and was our choice as we had arranged transportation. The Pentland ferry leaves from GillsBay and will transport vehicles.

The ferry was typically a forty-minute trip in good weather to the island of South Ronaldsay where our adventure was supposed to begin. The ferry itself was an adventure. It carries passengers across the Pentland Firth one of the most dangerous stretches of water on the planet.

Weather and winds are carried from the west across the cold north Atlantic. There is nothing to stop the swift current until it hits the west coast of Scotland and the various islands. Then the current is forced into this tiny passageway where it picks up speed to often a furious pace. Mariners call it the Merry Men of Mey, but there is little to be merry about if the wind and water wrecks your boat.

Metal towers rise from the icy sea like some sort of Celtic Wickerman. Their purpose is to provide refuge for a shipwrecked sailor to swim to and cling there in hopes of rescue. The freezing water and the horrific winds, however, might make a quick trip to Davy Jones Locker an alternative to a slower death in the elements.

We felt lucky to be aboard even if the winds made late May feel like March. Our fellow passengers included a man who appeared more accustomed to raising a sword on a dragon- prowed ship.

Clad in a Shetland sweater and a kilt, his long hair and beard were white. He was a big man and potentially dangerous But I have a knack for getting people talking. His face went from a stern powerful look to a warm smile as soon as I said hello.

The Last of the Vikings

“I am the last of the Vikings”, our new friend Hibbish announced.

In the next forty minutes, he regaled us with tales of his life as a wrecker and a smuggler in the various small islands of the north.

He had often played both sides of the fence, taking goods left by wrecked boats and on occasion “recovering” goods for insurers. He obeyed the laws of the Sea, although they seemed more appropriate for those days of Leif Ericsson.

He also told us about life in the islands. The Orkneys have little real crime as everyone knows each other. Once a bicycle was stolen, so shocking it was seen as a mistake.

An ad in the local news brought the bike safely home to its owner. Another time a handful of Londoners stole a car.

They soon ran out of gas and were arrested boarding one of the tiny mainland-bound ferries. The Orkney people were not the dour Scots we had imagined. Because they worked hard they believed they were entitled to play hard as well. We were told that affairs such as weddings and New Year celebrations could last a fortnight. That is, for two weeks.

Where was our friend headed? To a wedding.

We separated company in Burwick as our plans took us to ancient Scotland. On South Ronaldsay was the Tomb of the Eagles, a megalithic burial place dating possibly five thousand years. Ancient man had a great deal of respect for the Sea Eagle as these creatures can and will carry off fully grown sheep.

A reserve in Scotland’s Caithness had a scare when one tried to take a teenage boy whose job it was to dish out food for the large bird, although he was not supposed to be on the menu. Now their rules include a provision that these birds are fed by two men at a time. The tomb was named as sea eagle feathers were part of the burial.

Further north we visited the Ring of Brodgar. It is one of Europe’s greatest stone circles once comprising 36 stones in a 300-foot circle. With only a small amount of visitors, it is a much greater experience than its crowded counterpart Stonehenge.

For most of mainland Caithness as well as the Orkney islands, all the prehistoric monuments required only the ability to find them. Once that was out of the way visitors could crawl through cairns and rest among solstice markers that served an ancient culture.

Our next stop was Skara Brae.

It is one of the most remarkable stone age complexes, most likely created as living quarters for the stargazers who would help erect the Orkney monuments. Built entirely of stone it had hinged stone doors and stone furniture.

The kitchen and the bathroom had running water to carry away waste. The doors could be made to lock implying to archeologists that students may have been confined as they memorized the astronomical data they committed to memory long before the Druids existed.

The Skara Brae complex was created before Egypt built the pyramids. It was only unearthed in the nineteenth century as a vicious Orkney storm literally blew off the sod roof.

Not far from Skara Brae are the Standing Stones of Stenness and the Maes Howe structure. Dating to 3000 BC they measured the solstice and the equinox and could possibly have been used to predict eclipses.

After a day among the ancient stones we arrived in Kirkwall, the main city of the Orkney Islands. In the center of Kirkwall is the St. Magnus Cathedral. Built of red sandstone, it is the UK’s most northern cathedral dating back to the 12th century.

We were just in time to see the wedding party emerging from the large doors. The bride was in white and her bridesmaids in purple. The groom and groomsmen were in white shirts, purple kilts and black jackets that hardly covered their chests.

While we searched for our new Viking friend in vain, the crowd outside included three teenage girls who explained how things in Kirkwall worked.

It was custom for everyone to show up for a wedding, invited or not. The surrounding combination cemetery and park held hundreds who came with cameras and well wishes. Everyone here did know each other and while the cathedral might not hold thousands, the streets could.

The greatest surprise came when an open truck made its way through the crowded streets. In the back was a hostage who was being pelted with eggs, molasses and other foodstuffs.

We learned he was a future groom, scheduled to marry in two weeks. This custom I thought was extremely odd and commented that it could take two weeks before he stopped smelling.

They laughed and said they hoped not as the bride was to endure the same next Saturday.

Our Orkney adventure did not end in Kirkwall. The next day we hired two men to take us, by Zodiac, to some of the uninhabited islands our friend Hibbish included in his stories. Stroma was one such place where a boat could be

driven through a rock channel that ended in a grassy meadow where sheep grazed.

This hole in the wall was a perfect getaway for wreckers who claimed some of the sea’s bounty.

When we entered another long cave, my husband noticed our two guides give each other a mischievous look and raised the hoods on their raingear. He indicated to me to

quickly do the same. Just in time as the droppings from some of the thousands of guillemots that made their homes on the rock walls rained on our tiny boat (and covered heads).

The fun wasn’t over.

Inside the sea cave our captain navigated very slowly in the pitch dark. Then he threw on the lights. Hundreds of sleeping seals awoke, jumping off perches on both sides of our small craft.

While the seals jumped in shock as we did in surprise, our guides seemed in the greatest danger of falling overboard as they laughed so hard.
Before our trip back to Inverness, our base for exploring Scotland, we managed to find the best fish and chips in the UK.

(Or we might have just been very hungry). Our trip back meant a bus to the ferry port, on which we consumed our dinner while the aroma made our fellow passengers hungry as well. Once our ferry docked safely in John O’Groats we still had a three-hour drive to our hotel.

Inverness made a great location for visiting the Isle of Skye, the Loch Ness, the Culloden battlefield, numerous megalithic cairns and standing stones, great parks, and scenic waterfalls. The Marriott there was stately yet low key and run by a welcoming and friendly staff.

Hotels in the Orkneys include the Kirkwall Hotel, the Ayre Hotel and the Westrow Lodge. 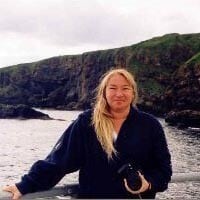 Terry Sora is based in Palmer PA and lives with her husband Steve, her dog Jax and her parrot Che.