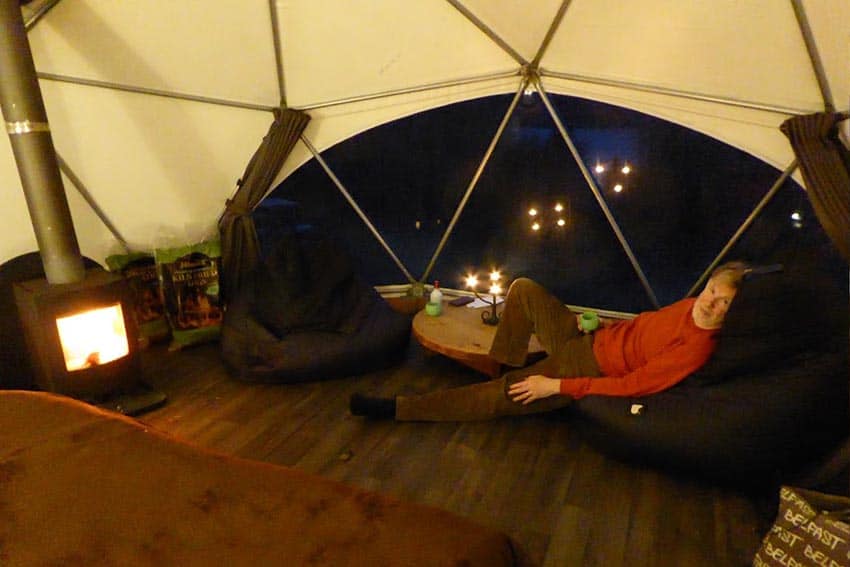 I’m standing on a Scottish beach between fall and winter. It’s late afternoon and dark.

We’ve taken the barbecue pit down to the beach, logs for the fire, farmhouse sausages, a chunk of bread, and a bottle of wine. The moon is casting a pale light over the North Sea.

When we’re drunk on wine and sea-spray, we walk the sweep of the strand, head torches casting pools of light on the empty beach.

Out to sea, a sheer-sided island rises out of the sea: Bass Rock. There’s no one here but us, although Edinburgh is just half an hour away.

For most of us living in the northern hemisphere, we want to hunker down for the winter or head south like the geese to warmer climates.

But the Scandinavians have a different idea: they embrace winter and find warmth in friends and family, walks in nature, cycles on country lanes, comfort food, candles, and blankets.

I came to Scotland to find a Celtic version of Danish hygge, which means, getting cozy. My first stop was the east coast of Scotland with its small fishing villages, hidden coves, and coastal woodlands.

The warmth of an East Lothian treehouse

Glamping’s the best way to experience winter hygge in Scotland. Our treehouse on stilts sits in woodland – an octagonal cabin and a second hut for sleeping and washing book-ending a covered walkway and balcony.

In the living space, we light the stove and simmer a stew on top.

When it becomes too hot, we go outside and roast marshmallows on the firepit. Below us, a line of Scots pines points an arrow to Bass Rock, rising brutishly from the sea. 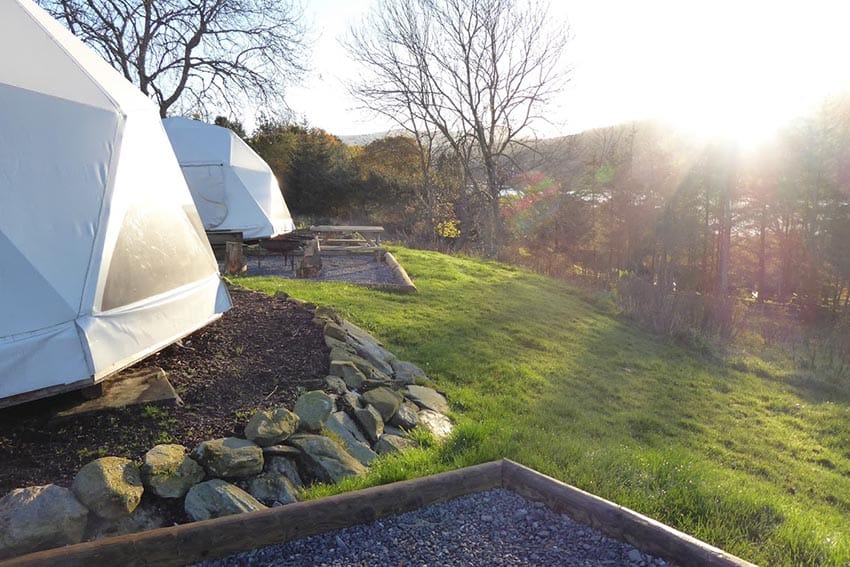 John Muir, naturalist, and environmentalist is known for his love of America’s wild places, but his passion for nature began in Scotland where he spent his early boyhood exploring the coast, hunting birds egg, and beachcombing.

From our tree house, we cycle John Muir country to the ruins of Tantallon Castle and the island of Bass Rock – home to the world’s largest gannet colony.

Lapwings circle overhead and low-flying partridge flap out of ditches. We bump down through trees to Seacliff Beach, the sandy cove echoing the curve of Bass Rock beyond.

In the hills, we meet the John Muir Way, then freewheel down to Tyninghame, stopping for coffee in a tearoom stacked high with cakes and crafts.

A morning is spent exploring the coast around Lochhouses Farm. We have the shore, dune, and woods to ourselves.

My partner combs the beach for razor shells and cockles and finds a rare cowrie. At the lochan (small lake) at the end of the beach, we watch oystercatchers peck the sand for food.

In the afternoon, we visit the fishing port of Dunbar and watch three seals that reside in the harbor skulk around the fishermen, hoping for fish scraps. It’s here, you’ll find the little John Muir museum.

Into the wild Highlands

East Lothian is a gentle, slow-paced place of hills and coast. The journey into the Highlands is a hammer-blow to the heart with its sculpted valleys and mountains.

But it’s the intensity of the northern light in the Highlands that makes this wild landscape so sharp and glass-like in its beauty.

In autumn bracken, beech and firs take on fiery shades of orange and yellow. When winter arrives, the hills slip on the silvers and whites of mist, frost, and snow and the landscape is luminous with clear, cold light.

We travel to Loch Tay between the village of Killin by the Falls of Dochart and Kenmore at Taymouth Castle.

Life in a geodome

We spent the first night of November in a tent – but in our geodome, we were hardly roughing it.

We relaxed into our bean bags, comfortable as an armchair, and roasted by the wood-burner while taking in the view from the arched window of loch and hill beyond.

The bed is wide and soft and we snuggled deep under the quilt as the embers died down. In the morning, we awoke to the sun rising over Creag Gharbh. The air was sharp and cold and slapped us awake. At night, we sat under the stars in the heat of the hot tub. Cold in these fall-turning-winter Scottish mountains? Not at all.

Apart from the short-sharp awakening in our geodome, it’s the warmth we experienced in Scotland. The hills and valleys are a flaming russet on sunny days, while the loch is a sharp navy-blue.

Cycling out of Loch Tay, we saw a kestrel soar on a current of air, and not much further on, spotted a stag disappear into the bracken.

We stopped at Kenmore for coffee and freshly-baked scones and continued along a quiet lane on the south shore.

The uphills were lung-busting, but the downhills through woodlands and towards lochside coves were exhilarating – the cold wind in our face welcome after the hot, hot workout of our climbs.

In Killin we devoured steaming bowls of Cullen skink – sounding revolting — but the steaming fish soup was delicious, especially after thirty-odd miles of hilly winter cycling.

We drove south again, this time to the Scottish Borders. This is a place of softly rounded hills, crumbling abbeys, stately homes, parklands of ancient oaks and chestnut, royal towns, ruined castles, and wide meandering rivers.

It may not be the Highlands, but it has its own wildness: The Scots and English were constantly at war here and it was historically a lawless place. We visited the abbeys and sought out tearooms serving delicious cakes to satisfy our craving for more hygge comfort food.

We found the brightly colored gypsy wagons of Roulotte Retreat in a wildlife meadow beneath the Eildon Hills.

There are seven roulottes hidden in among the beech and brittle gorse bushes of the meadow and surrounded by a lochan that catches the early morning light.

Encased in walnut, cherry, and pear wood, the roulottes are carved with elephants and lotus flowers; peacocks and paisley swirls; Celtic knotwork, horses, flowers and foliage; leaping hares, fairies and butterflies and furbished decorated with the warm colors of North Africa and the Orient: burnt-oranges and reds; plums, russets and ochre.

Above the roulottes the Eildons bump across the sky – three nameless hills – just north, mid and south. From our gypsy wagon, we climbed through meadow and woodland and up into the hills.

From the three peaks, we can see the roulottes, the hills rippling away to England and the salmon-filled River Tweed snaking its way to the sea.

These peaks are filled with poetry and folklore: Thomas the Rhymer was lured into the hollow hill by the Queen of the Faeries. They were home to the bronze-age dwellers and the Romans too.

From the Eildons, we drop down into the abbey town of Melrose, returning over the shoulder of the Eildons in a circular route and back to Maharani, our gypsy wagon ‘palace’ as sun sets.

Give me Scotland’s winter warmth

Returning home to England, I realized there’s nothing mad about turning north to the edge of winter. Give me the fiery warmth of Scotland’s fall any time over the sun-baked south.

Give me the slap of icy wind and the sweat of an uphill cycle; the roar of the North Sea and the gale of the hilltop.

Give me the weakened sun and the heat of a Scotch pie or a single malt. Give me the glassy light and the blaze of leaf-fall; the cry of the buzzard, the bolt of deer and the whisper of dune grasses.

We’ve walked the hills and seashores, cycled coast and loch and never once felt cold. We’ve squirreled our way through a mountain of cake in snug tearooms and curled up by roaring fires.

This is the warmth of Scotland’s fall-turning-winter.

Helen Moat is the author of The Peak District published by Bradt guidebooks. She is a freelance journalist, writing regularly for magazines such as Wanderlust and Derbyshire Life. You can find her blog here: https://helenmoatweb.wordpress.com. Apart from travel writing, Helen enjoys exploring the fictional landscapes of flash fiction and was nominated for the Sundress Best of the Net for one of her micro pieces.