A Treehouse Stay in South Carolina

South Carolina: Up the River, Sleepin’ in a Tree

The Way they do it in the country: “We’re putting in the canoe at the ‘cat hole’ ”, Scott explained as we bumped along in his truck on the way to the Edisto River.

“It’s named for the big red whorehouse that used to be on the banks there. Boy! There were some wild times there back then!”

It’s less than a two-hour drive from the magnolia-lined Rainbow Row of Charleston, South Carolina’s historic district to the cypress swamps of the state’s rural countryside. They do things differently here. Along the way, Scott stopped at a dirt road intersection and got out of the truck.

Standing solemnly, his hat on his heart, we watched a funeral procession passed. “I didn’t know the poor departed but this is how we do it out here in the country,” he said. “See over there,” he said pointing to the overgrown cemetery, “that’s from before the Civil War. Both blacks and whites are buried there but there’s a deep trench between the two sides to keep the spirits from mingling.”

Mark and I smiled. We know we live in Charleston but sometimes we forget it’s in The Deep South.
The ramshackle “cat house” lay in a heap by the riverside where we stopped to launch the canoe.

We received a quick lesson on paddle strokes and lashed our gear to the boat. “Look for an upturned paddle planted on the shore,” he hollered as we pulled away. “That’s your landmark for the treehouse”.

The February sky was azure, the air chilly. After we rounded the first curve and passed a couple of houses, we didn’t see a soul. Not even another boat. Egrets gracefully glided into the grasses along the banks. Great blue herons and hawks coasted majestically above our heads. The wintery forest enveloped us, extending leafless branches covered with Spanish Moss.

We learned quickly how to navigate around fallen trees as we paddled downstream. Cypress trees lined the banks. No alligators this time of year but we knew that this area is full of them. The current of the river carried us quickly without much effort and we soon fell into a rhythm, paddling further into the winter shadows.

Four hours later there was the sign and the incongruous appearance of three little treehouses. We easily beached the canoe on the riverbank and got out to see where we would be spending the night. Perched in a tree up a steep staircase was a tiny gem of a house complete with front door and carpeted floor.

Downstairs is one room with a futon, a table for two, a counter with a gas burning camp stove, a propane heater, a few magazines, games and pots and pans. Built into the eave of the house was our sleeping loft.

A triangular shaped window served as the mattress’s headboard. Lying there you can see through the tree limbs to the river below. Although there is another, larger treehouse nearby, no one was there but us. Intoxicating isolation. We roamed among the 150 acres and explored the other accommodations, the outhouse, meadows, and fields.

On the way back, as the temperature dropped, we gathered fallen branches and piled them in a firepit. We sat by the fire until the cold black night drove us into our toasty warm, cozy hideaway. Many honeymooners come to this treehouse and, as we nestled into the loft, we could see the reason. 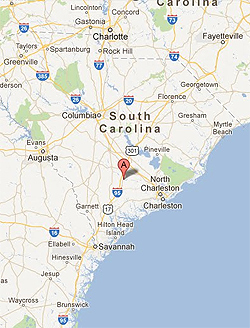 From the journals entries by previous occupants, we read, “Since we’re senior citizens it took us six hours to make it “home”. We raced the oncoming thunderstorms before the heavens opened…we slept with Mother Nature’s percussion on the roof”.

We read about the elaborate meals boaters had lugged in to make on the grills and propane stove provided. Lobster grits, steaks, fine wines.

They’d left little gifts behind. A can of smoked oysters, coffee, and hot chocolate shared shelf space with kitchen matches and candles.

Another journal entry captured the mood: “? PM: fat and happy in the treehouse. Raining outside and not a care in the world.”

The journal tells of many families who have enjoyed their stays too. A fat rope swinging from a strong branch invites belly flops into the river. Miles of trails to roam and critters to discover can easily fill days with wonder.

Do We have to leave?

The next morning we dawdled and lay around. “This would be a cool place to come again when we can swim,” I remarked. “But it’s so nice when it’s chilly and there are no bugs, and no one around,” Mark answered. As we finally loaded our gear and headed out for the four-hour return trip, it started to drizzle.

We slipped through the foggy forest silently. The river pulled us along as we paddled languidly. All too soon we were back at the outfitter’s camp. The weather had deteriorated and we were wet and tired but sorry to see our adventure over.

Driving back to Charleston, the treehouse already seemed like a fairytale, one I would recall fondly just like a previous visitor who’d written in the journal: “Every night when I’m going to sleep I’m going to close my eyes and pretend I’m in the treehouse…”

Carolina Heritage Outfitters is located in Canadys, SC about 90 miles from Charleston just off of I-95. Treehouse stays including canoe rentals, transportation and lodging are about $125 per person per night. They also rent canoes for daytrips, have a primitive camp for groups and a camping cabin.

Carol Antman is a writer living in Sullivan’s Island, SC.