A Return to La Serenissima, the Venice of Old

Imagine Disneyland when you’re the only passenger on the Matterhorn ride.

Or you’re lying on a sugary sand beach in the Bahamas with no one around you. How about hiking alone on the trail to Everest Base Camp, the towering mountain a constant beacon?

That’s a little like how I felt while walking along Venice’s Grand Canal this month.

Alone, my girlfriend and I could hear seagulls squawking instead of cell cameras clicking. Gondoliers sat drinking coffee and sending texts.

The Rialto Bridge above us was as empty as a rural bridge in Iowa instead of one of the most visited sites in the western world.

In a word, Marina and I had returned to paradise.

Regaining the Soul of Venice

We had timed it perfectly. Italy’s second Covid lockdown ended April 26 and living in Rome we had read how Venice was collapsing financially. However, it had also regained part of its soul.

Venetians talked about walking unimpeded down their calli, the word for “alleys” in Venetian dialect. The canals, long polluted beyond recognition, were showing signs of clarity from the lack of boat traffic.

We packed quickly and arrived in Venice on May 1.

After traveling internationally for more than 40 years and living in Italy for seven, I say Venice is still the most romantic city on earth.

But in our many trips to Venice, it’s hard to take a gondola ride when boats bang into each other in crowded canals, some of the passengers not even looking up from their cell phones. The Rialto Bridge had more traffic than New York’s George Washington Bridge at rush hour.

I remember 19 years ago sitting by a canal with a previous girlfriend. As I leaned over to put my arm around her, I put down my hand to steady my balance, and … it landed on a dead bird.

Yes, from romance to raunchy. That’s what Venice sometimes became.

But now, as the planet slowly picks itself up from the brutal beating Covid-19 delivered, Venice has resurfaced as it hasn’t been seen in maybe 1,400 years. It may have been before the mighty Venetian Republic, when it ruled the seas from Croatia to Cyprus, that Venice was this empty of visitors.

Venice was so quiet we could hear a tear drop.

“I have to say it’s magic and incredible,” said Simone Poli, a grateful Venetian at his family-owned Ai Mercanti restaurant. “It’s a magical feeling. I don’t know how long Venice will remain this way.”

Keep in mind Venice usually gets about 30 million tourists a year. That includes about 30,000 a day from cruise ships during the summer. When we arrived on a Saturday, Venice had a fair number of day-trippers from around Northern Italy. By Sunday at noon, we practically had Venice to ourselves. 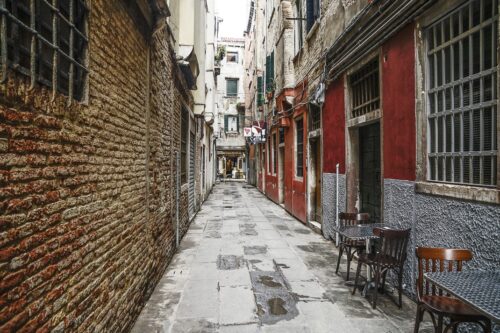 In previous trips I placed gondola rides up there with stadium proposals on the schlock meter. But while chatting with a couple of bored gondoliers, Marina talked one of them into dropping their 120-euro price for a 45-minute ride down to 80. I looked at the nearly empty Grand Canal. I saw the gondola’s overstuffed high chair dressed up more like a throne than a boat seat. I heard the gondoliers’ sad stories of a tourist town with no tourists.

“On some days, nobody comes,” said Paolo Vianello, one of the gondoliers who has been transporting lovers for 30 years. “I stand here, six, seven hours like this, and go home. Nothing.”

We didn’t see another boat for 20 minutes. On quiet, empty canals, we could hear the water ripple off the oars. Birds sang over our heads. I even saw a cormorant dive searching for fish that no way could’ve survived in these waters two years ago.

In the meantime our gondolier, Luciano Pelliciolli, was a walking Wikipedia. He pointed out the seven-star Aman Venice hotel where George Clooney got married five years ago. We saw the home of German poet Johann Goethe who lived here from 1786-88 and where Wolfgang Mozart stayed when he gave his first Venice concert — at 15.

Luciano pointed out the water mark — six feet over my head — where the great flood of 1966 reached, killing two and destroying or damaging 75 percent of the businesses. Even he sees the change in canal quality with no floods, cruise ships banned, and little boat traffic.

“It was crystal clear in March,” Luciano said. “It was possible to snorkel.”

After we docked and I gave a well-earned 10-euro tip, we did something neither of us had done on multiple trips to Venice. We had never had a drink in St. Mark’s Square. It’s often hard to find a table, and every pigeon in Veneto descends to eat the breadcrumbs tourists throw as part of their bucket list.

On this day, we settled at Gran Caffe Quadri, a St. Mark’s institution since 1775. Marina ordered a Spritz, a Venice-born cocktail made from Prosecco, Aperol, and soda water, from a distinguished gentleman in a white tux jacket. I ordered a local Pinot Grigio. People occupied only one other table. We sipped and sat and gazed at the setting sun as a few starving pigeons scurried for the bread crumbs we threw off our table.

Finding a hotel took about five minutes online. Nothing was full. We stayed at the Antico Panada, a three-star hotel just a few long spaghetti strands down an alley from St. Mark’s Square. Sunday night, after the day-trippers had left, only two other people were in the hotel.

While the estimated 50 percent of the dwindling population of 52,000 work in the tourist trade and want their economy back, they at least have their town back.

Maybe because of the peace and quiet, the food seemed to have improved. Or maybe it’s because part of Italy’s lighter restrictions is restaurants could reopen but only serve outside. In arguably the best food country in the world, Venice is often forgotten as a gastro center. However, Marina and I never ate better in Venice where the evenings were mild and calm.

At Ai Mercanti, in a quiet secluded, enclosed square, we lunched on marinated sardines in raspberry butter, potato gnocchi with asparagus, crispy veal tendons, and local Mittilla mussels. Dinner was tube-like gragnano pasta with scallops and dried Sicilian tomatoes at Trattoria al Gazzettino which served us free appetizers, including juicy black chunks of sepia, the Venetian version of cuttlefish.

The highlight was lunch at Trattoria Dona Onesta (“Honest Woman” in dialect) in the usually bustling San Polo neighborhood. We sat at one of four tables on a patio lined with purple, pink and white flowers over a motionless canal.

The sun shined. A classic guitar played on the loudspeaker. I imagine my octopus salad and salmon in herbed tomato sauce were good. I don’t remember. I was too busy drowning in romance.

That’s the thing about Venice. Romance isn’t just food and architecture and nature. It’s also silence. And Venice is so quiet, the only thing you often hear is your own heart beating. Especially now. 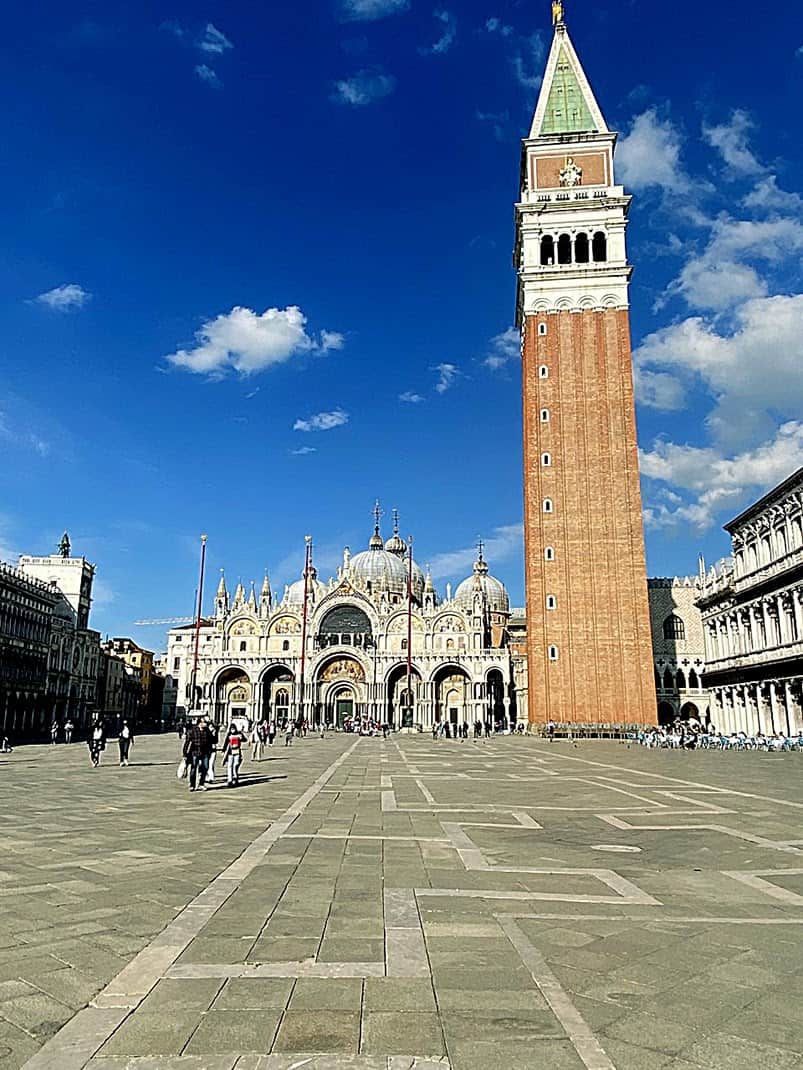 If only Venice can get its own heart beating again without it causing a heart attack as before. Pre-pandemic, tourism brought Venice 3 billion euros a year. Cruise ships alone brought in 290 million. City officials estimate in 2020 the city lost 1 billion euros.

The Mayor Weighs In

“It’s a very spring atmosphere, a new season,” deputy mayor Simone Venturini said in a phone interview. “We feel that the emergency is behind our back and we’re going into a new season: a season of hope, of rebirth.”

So how do you bring back the economy without making it so crowded again that Venetians leave like rats after the city’s frequent floods? The city’s island population has dropped from 174,800 in 1951 to 52,000 today.

For starters, in May 2021, the Italian government finally adhered to the city’s pleas and banned cruise ships from Venice’s waters. They must dock at Porto Marghera on the mainland, a 20-minute drive away.

Venice is also pushing to charge 3-10 euros to all day-trippers, part of a long-standing move to promote “quality tourism” over people who snap selfies, grab a gondola paperweight and flee.

You Must Stay in Venice

Venice always brings emotion out in me, in everyone. Covid has killed so many people in Italy, but nothing can kill Venice. I live in Rome, the Eternal City. But Venice is eternal love.

Due to Covid-19 restrictions, Italy is not allowing visitors from the U.S. except for essential reasons or to return home and must quarantine for 14 days upon arrival. Tourism is not allowed. However, on May 16 it ended required quarantine for all European Union countries and it may end for the U.S. as well. The current working date of more changes is June 1. Weekdays are much less crowded than weekends when there are more day trippers.

How to get there: Italo (italotreno.it) has two trains a day from Rome lasting four hours for 69 euros if bought at least a week in advance. Prices are higher if purchased sooner. Trenitalia (lefrecce.it) has several a day ranging from 24.25 euros for eight hours to 77.90 euros for four hours. 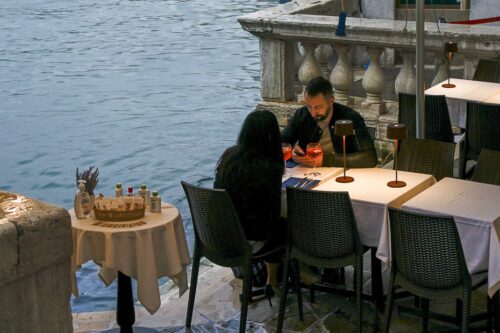 Where to Stay in Venice:

Only about 50 feet from St. Mark’s Square, the three-star Panada has elaborately furnished rooms and a fine buffet breakfast included. I paid a little more than 100 euros a night.

Trattoria al Gazzettino, Sottoportego delle Acque 4997, 39-041-521-0497, www.algazzettino.it, info@algazzettino.it, 12-4 p.m. and 6-10 p.m. On a quiet alley between St. Mark’s Square and the Rialto Bridge, Gazzettino serves interesting twists on classic Italian pasta dishes and they throw in some treats on the house.