Diving into Crystalline Cenotes of the Yucatan

Into the Crystal Clear Underground Cenotes in Riviera Maya, Mexico

Our family loves everything about Mexico’s Riviera Maya. The mystique of the Mayan Ruins, the lush tropical jungles, soft white beaches caressed by tourmaline waters, and natural wonders that practically defy definition.

Situated along the Caribbean coastline in the eastern portion of Mexico’s Yucatán Peninsula, Riviera Maya encompasses an 80-mile stretch running from Cancún south to the Mayan ruins of Tulum. The region is heavily inhabited by the Mayan people.

The ancient Mayans were famed for their culture, architecture, and superior astrological knowledge.

What is not as well known is that the Yucatan also houses thousands of cenotes (pronounced sen-o-tays) ranging from small to massive.

Some are easily accessed; some are located on private land. But each time we visit Riviera Maya, our goal is to add another one or two of these experiences to our list.

Why? Because not only are they totally fascinating, the cenotes are so stunningly picturesque that we find ourselves compelled to share their beauty with the rest of the world.

These bodies of water translate to “sacred wells.” Cenotes are actually underground lakes and rivers formed throughout the jungle when limestone caves began to erode after the Ice Age.

Eventually, they caved in, creating holes in the earth, and forming vast underwater reservoirs that fill with rainwater or other underground sources.

The Yucatan is home to some of the world’s longest underground cave systems.

Archeologists continue to uncover more of these cenotes and recently discovered 9,000-year-old human and animal bones from the Ice Age inside these cavernous marvels.

Basin cenotes contain shallow water reservoirs. But there’s no doubt these varying sinkholes are and always have been an integral part of the Mayan culture.

And it was quite exciting to delve into the history of these mystical cenotes with a knowledgeable local guide from EXPERIENCE Mexico Tours. T

he insider information he provided was invaluable in understanding this fascinating culture. And guaranteed the cenotes we explored were unlike anything we’d ever seen before in other countries we’ve visited.

Importance to the Mayan Culture

Sacred to the Mayans, these freshwater sinkholes were vital to their society as the cenotes provided a critical source of drinking water, especially during times of drought.

They were also of major religious significance to the Mayans who believed them to be secret entrances to Xibabla, the underworld where ancestral spirits, gods, and supernatural beings dwelled.

Hence, many of the Mayan ruins like Chichen Itza, Coba, and Tulum were built near clusters of these natural wells.

Some cenotes were even considered sacred sites where worship and sacrifices took place. Shocking human offerings and rituals were conducted to please the gods, especially when asking for rain.

Most of the popular cenote destinations have requirements visitors need to know about. Entrance fees are payable in cash only. Word of advice here is to have pesos as paying in the U.S. dollar doesn’t provide the best conversion rate. We learned this lesson on our very first visit to the Rivera Maya cenotes.

Due to the purity of its waters, guests must shower before entering the cenote. Regular sunscreen isn’t allowed as it damages the fragile ecosystem. Be sure to buy your biodegradable sunscreen before arriving in Mexico as it may be pricey and difficult to find (not all Mexicans wear sunscreen). Lastly, please don’t leave with anything you didn’t bring in with you. Let’s keep the gods happy.

A life vest is also required regardless of how good a swimmer you are. Snorkelers have to wear them as well, though divers obviously are excluded. It’s also a good idea to bring a water-resistant or underwater camera, as the views inside the cenotes are absolutely stunning and picture-postcard perfect. We’re so glad we had ours. 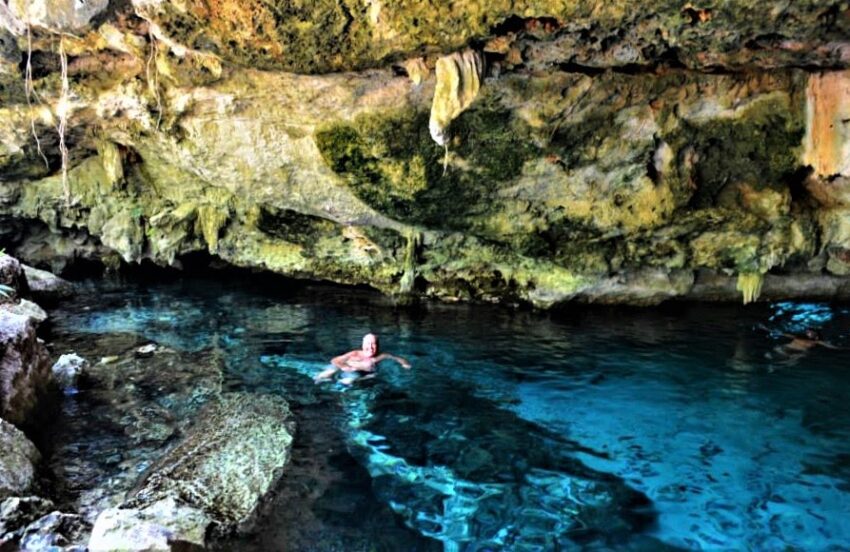 With thousands of cenotes located within the Yucatan, one of the best ways we’ve found to experience them is to visit two or three within the same locale. The Yucatan is massive, and being on the road for long distances can take the joy out of an adventure. Additionally, most cenotes are located within the jungle accessible only by long bumpy dirt paths. So, it can take a bit of time just to get to them.

On our most recent trip to Riviera Maya, we focused on the area of Tulum, as we were visiting the Mayan ruins of this coastal city as well.

This was our very first cenote experience and one we’ll long remember, mostly because after a local proudly recommended it, we ventured out to find it.

Located on a nature preserve, two cenotes shaped like a pair of goggles connect into a large cavern forming one of the longest underwater cave systems in the world. Translated as “Two Eyes,” this unique subterranean cavern sports crystal-clear pure azure waters creating the perfect setting for cave diving and snorkeling. Its calm waters are ideal for swimming and the dry cave area is fun to explore.

Refreshingly cool and pure at an average temperature of 76 degrees Fahrenheit, we found it a welcome respite from the humid tropical heat of the day. Though it was a bit chilly at first, it didn’t take long to acclimate.

Just 15 minutes north of Tulum, Yax-Muul is located in a beautiful nature park that rises like an oasis after hub-bubbin’ down a pock-filled two-mile dirt trail.

Even before entering this cenote, we had to partake in a Mayan ceremony asking the gods to bless our visit. The playing of light in these waters is stunning.

Sunlight filters down through openings in the cave’s roof where exotic jungle birds flit in and out.

The cenote winds its way through a series of caverns, each one more fascinating than the last. Massive stalactites and stalagmites here are so impressive, it’s hard to describe their grandeur.

The water is fresh, crystalline, and cool, reflecting a variance of blues and greens against limestone backgrounds. This cenote is especially popular with scuba divers who come to further explore its deepest caverns.  A second cavern, Sac Tuunich surrounded by beautiful flora and fauna hosts the Mayan ceremony and is much shallower than Yax-Muul.

The Mayan name for this stunning massive cenote means “giant birdcage” and it’s an absolute perfect moniker as birds and bats have happily made this cavern their home. Birds build their nests into the limestone ceilings of the cavern, and it’s absolutely fascinating, especially seeing the babies peeking out from overhead.

Jungle-y vines here have made their way into cavern openings. And to be honest, our group of friends all felt as though we were on an Indiana Jones film set. Only this was the real deal with Mother Nature at her finest.

One of the most beautiful underwater cave systems in the Yucatan, Gran Cenote is located on private land. We entered the cavern through clear multi-hued waters with our guide, then swam to darker passages in the rear of the cave lit only by flashlight.

Even National Geographic Diver has featured this stunning cenote in their magazine. We clearly understood why after our amazing day of exploration here.

Caverns and Cenotes of Xel-Há

One of the most beautiful natural water parks we’ve ever been to, Xel-Há, which means “where water is born” is a jungle-y paradise sporting a host of water activities for those who love getting wet in the outdoors.

The park is actually a natural inlet of the Caribbean that during the pre-Columbian era served as a sheltered harbor, commerce spot, pilgrimage point, and a refuge for sailors.

A massive river system with continuous underground flow meanders through the winding mangroves, making it perfect for tubing or kayaking.

Snorkeling is also a favorite of visitors due to the clarity of the bay waters. But what we found equally fascinating were Xel-Ha’s caverns and cenotes.

Its magnificent caverns can be accessed by water from the shore of a secluded cove.

Light reflecting off the crystalline water floods the interior with sunlight, magnificently illuminating the inside, creating a magical sanctuary of serenity and reflection.

Access to the park’s two cenotes requires crossing a floating bridge that’s quite interesting in itself.

The sway of the bridge is determined by two factors: the tides and the winds. At the time of our breezy crossing, it was a challenge to get any good footing.

A park guide on the bridge laughingly proclaimed “demasiado tequila”- too much tequila, even though we hadn’t had a drink!

Two natural picturesque cenotes on the north side of the bay are lovely for viewing but don’t allow swimming as they are protected areas of the park.

However, just up the jungle path after passing a grouping of tiny cenotes, we took our turn on a rope swing dumping us into the cool, clear, cavern of Ixchel Grotto.

British novelist and writer once said, “Those who don’t believe in magic will never find it.” We are so glad we followed our instincts and ventured out to find some of the Yucatan’s most priceless treasure – its magnificent cenotes. One of the reasons we need to go back is to experience more of these mystical, magical places.