Venice on a Budget

Get to Know Venice As the Locals Do

If you’re considering Venice as your next destination, you’ll have done your homework and know exactly what to expect and see, so I’ll not be giving you a Venice ‘to-do list’.

Instead, I’ll encourage you to ‘people watch’ instead – step away from the well-trodden tourist path, and see where the locals live.

Whilst walking along the cobbled back streets of Venice, which are encased with tall ancient dwellings on either side – the first thing you’ll notice, next to the sounds of lapping water, is the silence, and the eerie echo of your lone footsteps.

Aromas of Coffee and Bread

The seductive aromas of freshly ground coffee and crusty bread will lead you to cafés overflowing with local old-timers.

Some in animated discussions about football or spinning yarns of yesteryear, whilst others sit motionless, reading a newspaper, occasionally taking a sip of the strong black coffee they favor in these parts.

All the buildings date back centuries – many before America was discovered!

I passed a row of uniform triple-story stone cottages, the archway in the center was inscribed with a ‘built’ date of 1462.

Directly beneath a neighboring archway, I observed an elderly gentleman stooped over a freshly dug mound of earth – he was poking at it with his walking stick.

Numerous clucking hens were at his feet, scratching at the soil, ferreting for worms and grubs. One let out a whooping squawk and attacked something only she could see in the dirt. This caused the other hens to rush across in excited anticipation.

Beyond them was an entrance to an immense cobbled courtyard with a bronze four-tier fountain in the center.

The quiet within allowed the light trickle of water to resound off the high walls. Stained glass windows, depicting biblical scenes, overlooked the quadrangle on three sides.

The entrance door to his house stood open. I stopped mid-stride to take it all in. An immense Murano crystal chandelier, Venetian antique furniture you’d how only find at an exclusive auction house, tapestries on the walls, and a huge staircase leading to the floor above. ‘

This is how the other half lives’, I thought.

The old man turned and shuffled back through the entrance, shoo shooing his stick at the hens who immediately darted into the courtyard.

He pushed the wobbly courtyard gate shut, encasing himself in the secret world of immense wealth which lay beyond.

Permitting myself just one touristy indulgence, I head to Harry’s Bar

I took a water bus (Vaporetto) down the Grand Canal to Vallaresso, near St Mark’s Square.

My ears were bombarded with different languages emanating from the boards of tourists.

I stepped off the pier into the nearest doorway, being Harry’s Bar ( and was somewhat taken aback when I saw Ernest Hemingway’s doppelganger folded into a chair which was clearly far too small to accommodate his ample frame.

He grabbed a small cup of something and thrust it deep into his beard. Evidently if found his mouth. Soon he was calling for further service and gesticulated wildly at an aged, drooping concierge, who hurriedly shuffled across.

Waiting on the Italian Beauty

Both waited on the Italian beauty sitting beside ‘Hemingway’ (who was skillfully sculpted to look several decades his junior) to finish the animated conversation she was having with her phone.

After dramatically snapping her phone shut, the concierge addressed her by her title – ‘Contessa’, enquiring if she’d consider another drink.

It felt as if I’d stepped into another decade and believed Hercule Poirot would, at any moment, step into this small art deco bar.

Harry’s Bar is known the world over as having been frequented by wealth and fame, such as Ari Onasis, Orson Welles, and Her Majesty Queen Elizabeth II, and may go some way to explaining the exorbitant price for little more than a shot glass of their famed Bellini (sparkling wine and peach juice).

In conclusion, I have just one suggestion about Venice. After you’ve visited the obligatory touristy places (get there early to avoid queues), return to the ancient city at night. Hardly anyone will be around, other than a few locals.

It takes on a different persona in the dark, and is guaranteed to blow your mind!

I should have consulted the European school holidays timetable before planning this trip as the summer holidays (July/August).

Also, Venice is flooded with holidaymakers at this time of year and the magnitude of tourists could become disconcerting.

Begin your sightseeing very early to avoid the tourist rush, or book your vacation in October/November, when the seasons change.
Accommodations:

Good, if on a budget: I stayed in a self-catering beach chalet at Marina di Veneza (www.marinadivenezia.it), which is a half-hour water bus (vaporetto) ride outside of the historical city itself.

The marina, a self-contained holiday village enclosed within a pine forest, has it all: two large swimming pools, an assortment of bars, a grocery store, restaurants, WiFI, boutiques, a hairdresser, and an assortment of gift shops. They also have a private beach on the Adriatic Sea, with a couple of beach bars.

The air-conditioned accommodations are pretty classy, and the price is astounding for what you get (starting at around €70 a night for a 5-bed bungalow!). If you’re on a budget I doubt you could better this.

Everything you need is on-site.
The price is unbeatable.

Situated some way outside of the Venice center and its attractions.

It’s a holiday camping site, with all the associated drawbacks.

The water taxi is expensive.

Fantastic, not too far off-budget: I treated myself to a night at the Hilton Molino Stucky (www.molinostuckyhilton.com), a repurposed flour mill turned 5* hotel, hunched on the banks of Giudecca Island. The birds-eye view across the main canal to Venice’s historic center is like nothing else out there!

The rooms and suites are in light neutral tones, timeless in design, décor, and modernity (prices start at €190 per room and include breakfast). It’s all merged with the Venetian heritage, the lagoon history, and that of the flour mill.

The design details, hand-painted wall motifs, and fabrics pay homage to it all. They’ve taken classic Venetian style and turned up the volume.

The hotel’s crowning glory is the chic Skyline bar – one of the most exclusive locations in the city. This is a cocktail bar in Venice, where everything comes at a price – especially if a bird’s eye view is thrown into the mix.

You can sit outside on the terrace or at your own table inside. Be sure to make a reservation and request a table well placed to take in the views. During the summer months, there are pool parties and regular live music and DJs on the terrace. www.skylinebarvenice.it

This is a historic gem, architectural masterpiece, and a culinary event you’ll not want to miss as the hotel’s Aromi Restaurant – it’s the hottest meal ticket in town!

Executive Chef, Luca Nania: “One of my signature dishes is octopus glazed with balsamic vinegar, with watermelon and sheep’s milk ricotta. I start by choosing only the Verace octopus (which is easily recognizable as the tentacles have a double row of suction cups).

“I put the tentacles inside a vacuum bag, adding sesame oil to avoid breakage of the skin, I cook it in my Roner at 77° for 5 hours. When the sous vide process is complete, I add some crunchiness by flambéing the tentacles with Modena balsamic vinegar. This is the recipe that I have been studying for years and have perfected the temperature and cooking time.

For me it’s all about a clean presentation and not too many ingredients otherwise it becomes messy – simplicity is key.

I place maximum focus on the quality of the raw material, the perfect cooking process and presentation.

I had the amazing opportunity to work in many different kitchens. I think no one master has given me all the knowledge that I need for this very hard job. I’ve learned more from teamwork as everyone has a specific role and the final success is everyone’s merit.

My time at JW Marriott in Beijing (where I oversaw a large operation), is what I refer to as my ‘university. I managed large volumes and delivered only high-quality dishes. This is where I learned how to work under pressure, run huge banquets, and where my Executive Chef taught me a few Asian ‘must’ dishes.”

The chef I admire the most would have to be Oldani. I find that my philosophy is very similar to his way of running a kitchen. 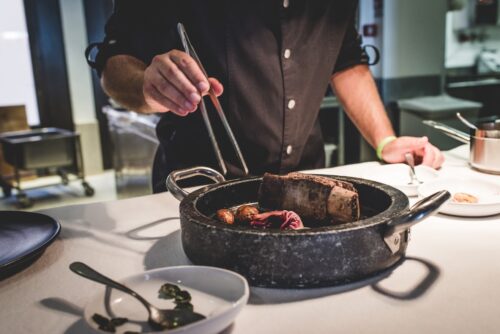 The most essential items in my kitchen are my Roner, as well as my hand-crafted knives – each has a special job to do.

But I’ll make no excuse about miles traveled in sourcing my Angus beef from Nebraska – it’s simply superb marbling and the best beef in the world. Sure, I could buy good meat locally, but that’s not good enough. I want the best.”

To demonstrate Luca pushed a hefty Nebraskan Angus spare rib under my nose, encouraging me to sample it and draw my own conclusion.

Using his Roner, a microwave oven, then flash-frying it for a minute, delivered the most succulent and flavorsome beef I’ve ever tasted. It literally dripped off my fork.