Everest Base Camp, by Helicopter

When in Nepal, a Helicopter Adventure to the Top

So today, it is time to say hello to the king of the mountains, an easy and fantastically fun way. Not cheap, but definitely worth all of the money.

How professional is hard to gauge when a thick layer of dust cloaks the tatty office furniture and the morning chatter is in a language I find impossible to understand.

There is always a little apprehension when placing your life in an unknown’s hands. Sensible questions were asked. (Stupidly in English) Like how old is the helicopter?

Are the pilot’s ex-military, or even qualified? But, with a reassuring smile, I was quickly weighed, then shuffled out of the domestic airport and up we went.

In need of a good cleaner, but Air Dynasty knows what they are doing. Their name would suggest a long-term plan.

In seconds, we were flying across suburban Kathmandu. Lego brick houses and flats, painted in earthy colors, with the occasional splash of pastel pink, green and yellow slid past below. Not tightly squeezed together, or stacked high, like other rapidly growing capitals.

A height restriction has been revoked in Kathmandu, but the shocking, 7.8 earthquake that rocked the city in 2015 will never be forgotten. This “once a century” disaster is the last chapter written, so far, in a long line of mantras. Whispered from mountain monasteries, recounting Nepal’s ancient, sometimes tragic, but always fascinating history.

The buildings soon thinned, slowly replaced by the hundreds of terraced farms that ring the city. Carved into the steep hills, they are soaked in a silver mist, which steamed like Dragon’s breath under the morning sun.

The hills, the mythical creatures olive backs, sit half-hidden by a lazy swirl shimming through the valley tributaries. Fading gently into a hazy horizon.

Yes, this landscape would have inspired Tolkien.  It is a wispy forest creature country.

After flying only meters above a hill pass, the scenery quickly changed from domesticated to wild.  Thick forests are now below us and the rapidly approaching snow-capped mountains loom. This is where the protected lowland leopard still prowls.

Dropped off at a mid-point, we were quickly picked up by another chopper, which flew us through the narrow Everest valleys.

It is stunning. Lawrence, our “living the dream” German pilot, who had just paid off the 120 thousand Euros his mother had loaned for his training, skillfully, but playfully, glided us over Evert Base Camp two and one.

Again dramatically beautiful, but they must be shivering with hypothermia down there.

It is an exciting, wow experience to be so close, to see for real, the highest point on Earth.

After a final sweep, two Indian businessmen and I were dropped off near a frozen ice melt.

They clicked selfies, while I crunched through the fresh snow trying to capture the beauty and startling colors with my camera.

It was crisp and silent, except for the trickle of icy water and the distant giggle of two very excited middle-aged men.

We were dropped off at 22 thousand feet, over 7 thousand meters.

I asked the pilot why he was sticking an oxygen tube up his nose. A second later myself and the two other passengers were hit with a touch of altitude sickness. A few deep breaths, I was ok, but one of the other two struggled with headaches and breathing problems.

The view is dramatic, breathtakingly panoramic. Incomparable to any mountain chain I have seen before.

This rugged landscape is strikingly unique. Simply magnificent. The journey to see it is thrilling.

20 minutes later, Lawrence is back.

Although hesitating, stalling for time, while standing in a landscape that is almost as old as time, (one more picture please), we had run out of time.

With a slight shudder, the helicopter hovered, rose, and then quickly glided forward. We are on our way back to Kathmandu.

Wide-eyed, I smile, turning back to look over my shoulder, eager for one final glimpse. It had been an incredible, once in a lifetime experience.

How Much Does it Cost?

This highly recommended four-hour adventure cost $1200 US. An agent in Thamel may ask for more, but negotiate and the price will fall.

As with all my mini, mechanized adventures in Nepal, you will get what you pay for. The Nepalese are still honest and fair. They value add, rather than inflate prices.

For the next best thing and at a fraction of the price, approximately $100 US, you can buy a ticket for a mid-sized passenger plane, which fly’s around Everest daily. Weather permitting.

Travel well, be kind, and live the moment with adventure and humor. 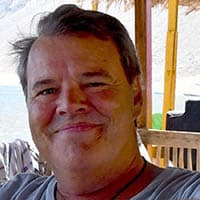 T. Huw Jones is an IB Secondary English and Film teacher. Originally from Wales, he has lived in England, Qatar, Libya, Azerbaijan, and Dubai. His home is in Bridgetown, a small heritage town found in the South corner of Western Australia.