Beneath the Famously Chaotic City of Naples, Is an Entire Underground World

Dropping into the gaping maw of 2,500 years of history, I noticed the stairwell we descended didn’t appear to end. It seemed fitting.

We had walked into the darkness of a mysterious city’s past. I slightly ducked my head to avoid scraping it on the low ceiling. We finally hit bottom after the 142nd step, 35 meters (115 feet) under the street above.

More than 2,500 years ago, this is where the city of Naples, Italy, first took shape.

We were in what Neapolitans call the Napoli Sotterranea, the Naples Underground. Once a long time ago, 200 kilometers (125 miles) of narrow tunnels, long corridors, and vast rooms snaked under Naples.

From the Ancient Greeks who founded Naples to the Ancient Romans who conquered them to the modern Neapolitans who survived World War II, where we were standing is the lifeblood of Italy’s most misunderstood city.

Naples is loud, crowded, hot, and chaotic. It’s considered the most dangerous city in Italy. Yet there’s a passion woven in the chaos, a warmth in the crowded, narrow streets that form a maze above us. The city is the birthplace of pizza and still may produce the best in Italy. Naples remains Italy at its most authentic.

More than 100 feet below, however, Naples is deathly quiet. It’s dark. While the sun bakes the city for much of the year and envelopes it in choking humidity in summer, in the Underground it’s 60 degrees year-round.

I’ve lived in Rome for more than seven years and have traveled through 17 of Italy’s 20 regions, from Sicily to the Alps.

I’ve seen enough museums to fill many lifetimes. Naples Underground is one of the most fascinating slices of Italian culture I’ve ever seen.

It’s 2 ½ millenniums of history covered in an eerie hour-long tour that leaves you with all-new respect for the people who populated it.

I was joined by Nadia, my English-speaking guide, in the first room down the stairs. Lightbulbs gave it a haunting glow. To our left was a large room filled with stone blocks of various sizes. Some are hanging from a rope attached to the ceiling high above.

After the Greeks settled into Naples in the 6th century B.C., this is where they found the materials to build the city in the 5th century B.C.

You mean the Greeks dug 35 meters underground to find these stones? With what, I asked? Electricity hadn’t been invented, let alone power drills. She pointed to some little trowels near the stones. She said it took centuries to dig this far but what they also found was water. The Greeks built a series of wells to keep the new city running.

Kicking Out the Greeks

After the Romans kicked out the Greeks in 326 B.C., they turned the underground into a complex water system in the 1st century B.C. With water coming from nearby Monte Sereno, the Romans formed narrow tunnels to increase water pressure and made the first aqueduct. They would later make aqueducts all over Southern Italy, some of which can be seen on the outskirts of Rome today.

Aqueducts All over Europe 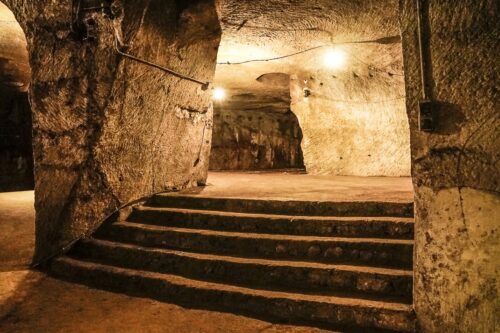 “The Romans were the best for aqueducts in all of Europe,” Nadia says. “This was an aqueduct for 2,000 years.

“But in 1884 we had a (cholera) epidemic. The water wasn’t good and they closed the aqueduct. They built a modern aqueduct over us.”

However, the Ancient Romans left a reliable source of water. This underground once held 14,000 cisterns. Some of the more wealthy Neapolitans had their own cistern just below their homes.

We turned the corner and walked down a long hallway into a room where behind bars were toy cars and crude iron artwork. This is where Naples’ modern history comes into view. Up to 4,000 people hid here during many of the 200 bombing raids Allied forces rained down on the German-occupied city during World War II. This is where the Underground saved lives.

It became a bomb shelter.

However, it took a major renovation to make the Underground inhabitable. After the cholera epidemic, the growing Naples population of more than 1 million during the early 20th century turned the Underground into a giant garbage bin. They used the well openings as places to throw everything from leftover pasta to dirty diapers to rotten tomatoes.

“They did three modifications,” Nadia says. “The first was to build this on the garbage because everywhere was garbage. Imagine the original level of the system is five meters under us. The second modification was to build the stairs.”

Naples had over 20 entrances during the Second World War. But they’re closed and our organization opened them 35 years ago.

The third modification was to close all the wells in Naples. Because everywhere was open wells. “They had to close them for the bombs.”

We walked farther and saw crude stone planks stuck in the wall, providing dividers for about a dozen spaces. This was the old bathroom. It was only discovered eight years ago.

We kept walking. My eyes began to adjust to the yellowish light provided by the bright light bulbs. We saw a bomb, left over from the war, hanging precariously by a rope about five feet from the ground.

Two other identical bombs lay benignly on a giant stone. An artist had put a Nazi helmet and gas mask atop two interconnecting iron rods to depict a macabre Nazi soldier.

I asked how the locals had time to get down here before the bombs hit.

“They had time because they had the sirens,” Nadia says. “They went down and this wasn’t the only entrance. We go out from another exit.”

To get there cames with a warning. When the Romans made narrow tunnels to increase water pressure, they didn’t picture tourists trying to squeeze through on a tour. Nadia asked me if I’m claustrophobic.

“A little but mostly in underwater caves,” I answered.

“The tunnel is over 40 meters,” she warned. “Inside is the only way we can see (cisterns) full of water.”

She told me if it’s too much we could turn around and return. She didn’t have to convince me it’s dark. The collection of small candles at the entrance convinced me.

We snaked through and again I had to bend my 6-foot-3 frame a bit to protect my head. The small daypack I carried scraped against both sides of the narrow wall. I hurried to keep up with Nadia who was casually walking through as if going to her kitchen.

I asked her if claustrophobes have trouble here.

“It happens,” she said. “But the people who are very claustrophobic never come down. They don’t come down the first steps.”

I timed the journey. It took one minute and 15 seconds and was worth it. We emerged to a big pool that would be suitable for someone’s backyard.

The water is one to two meters but in Ancient Rome it was five meters. It looked clean enough to drink.

“When this was an aqueduct, the only man who came down here was a well cleaner,” Nadia said. “He came down like a spider.”

We made the long climb back to the street and went out a side exit. We walked to the left side of the Underground entrance and saw a big church next to it. San Paulo Maggiore was built in the 13th century atop a Greek temple. In fact, two Greek Corinthian columns still hold up the facade.

The reason we were out in the February chill was one of the highlights of the tour. We walked up Via Cinque Santi about 50 meters where Nadia opened a big lock on a huge wooden door.

“Our organization discovered the backstage of this Roman theater,” Nadia said.

We climbed a few stairs where we saw a big room with a large display case of war paraphernalia, ranging from Nazi flags to old guns to U.S. officer uniforms. This was of the warren of small apartments, known as basis.

Chipping Away at the Walls

The Underground’s director, Vincenzo Albertini, bought one of these apartments and had heard an ancient theater was near here. He started chipping away at his walls and came across Roman brick. He cut out more and suddenly found himself in the backstage of the theater used during the Roman Empire.

Nadia moved a small bed a few feet, revealing a wooden door on the tile floor. She opened it and it led down to a huge room. The original family used this room to store food and wine.

We descended, walked down the tunnel, and exited to the back of the theater. It was large, lit like the lobby of a theater on Broadway. The original brick wall from the Roman Empire remains.

“This is where actors hung out before going on stage,” Nadia says. “The actors could go from one side to the other under the stage without being seen by the spectators.”

And not just any actor.

“It was used by Nero,” she said. “Before he burned Rome, he did theater. He believed he was a great actor.”

This remarkable tour is Albertini’s brainchild. A native Neapolitan born and raised behind San Paulo Maggiore, the 60-year-old spent his teen years exploring the underground’s different entrances. His parents told him chilling stories of going into the underground to escape the bombs.

He went off to study geology and renovated the site for visitation with a few friends. It opened to the public in 1989. Like all Neapolitans, Albertini is proud of his city. This is his way of showing it off.

“It was the most important part of the city at the time,” he says. “It could be important for the tourists to see everything again. I believe this could be a good entrance to start the tours of Naples.”

The Underground is being used for more than just tours. Classical music concerts, art exhibitions, and theater productions have been held down here. It’s 2,500 years of history combined with modern Neapolitan culture. Even 35 meters underground, Naples is happening.

Book a visit to Naples Underground