Stone Villages of the Athamanic Mountains

In Western Greece, hiking  Between Villages in the Athamanics

We left Ioannina city, driving 52 km on a narrow road with the green nature and views of the steep peaks of the mountains ahead of us.

The first image of Syrrako was enchanting. From afar, the stone-built village seemed to be anchored on the steep slope. We thought they were hanging on the edge of a deep ravine.

We left our car and passed the Lekfa stone gate. Walking about 300m on a path, we stopped at a stone fountain, to drink cold water.

We sat in the shade of the trees to get some rest and listened to the sound of the river that was flowing to the bottom of the ravine. We continued our way crossing a stone bridge over the river.  After a few steps, the old watermill of the village was in front of us.

At the end of the path, we reached the church of Saint Nikolaos with the high bell tower. A little further was the square with the age-old plane trees.

The houses were simple with beautiful courtyards, and there was serenity all around. Traditional stone fountains with plenty of running water were inviting us to quench our thirst. We were talking in whispers so we did not disturb the stillness of nature.

Syrrako was built at a 1200-meter altitude between two ravines, in a location of natural fortification. In the middle of the village, there are two springs. The roads were constructed from the center of the settlement radially to the four directions of the horizon.

The architecture of Syrrako was built on staggered levels, placed with a large height difference between them. Because of the height differences, every house has a view, without one blocking others. While exploring the village, we noticed that the corners of the houses facing the street were rounded. We wondered about the purpose behind the curved houses.

Near the church of Saint Nickolaos we discovered Chania, two large stone-built sheds with terraces, where in the past, goods were bought and sold from the surrounding settlements.

A little further on, there is Gkoura, a stone-built fountain, and small architectural marvel. We stopped at a small cafe to rest, before going up the cobblestone paths.

The village was wealthy during the 15th century due to the production of woolen fabrics. The woolen capes were warm and waterproof which made them suitable for shepherds, sailors, soldiers.

In the 17th century, these products were traded in large shopping malls and ports from London to Moscow.

Napoleon’s army procured 25,000 woolen capes from Syrrako. At the end of the 19th century, the Industrial Revolution in Europe replaced the wool for the armies with synthetic products.

The historic village has been burned twice, the first by the Ottomans in 1821, and the second by the Nazis, during WWII.

In the small cafe, we asked the polite owner about the rounded corners of the houses we had seen.

“To let the loaded mules pass,” he told us. “Our supply used to be made only by mules.”

After enjoying our coffee, we decided to cross the ravine by walking on the 3 km hiking trail that descends deep into the valley, in an incline.

For centuries it was the only route that connected the “twin” villages: Syrrako and Kalarites.

The required travel time was about one and a half hours from one village to another. The weather was very pleasant, so…we started our adventure in nature.

In some parts, the helical path was preserved in exquisite condition. The rustling of the Chrousias River flowing past us, the chirping birds, and the smells of oregano and wet soil created an unforgettable hiking experience.

We passed on the opposite slope through a small bridge and went up to Kalarites village.

The Kalarites village is built on a slope that ends at the gorge of Chrousias river. As a result, the houses at the highest point of the village are more than 500 meters away from those located at the lowest.

“A place that was more suitable for eagles and vultures to nest than for humans,” wrote the French explorer Francois Pouqueville in the 18th century.

As soon as we arrived at the village, we headed to the picturesque paved square that is arranged in a way reminiscent of an open-air theatre. The inhabitants and the visitors of the village meet each other under the age-old plane trees.

We sat down to rest and learned about the history of the village from the locals. During the 18th century, the art of silversmithing developed here. The people of Kalarites became famous from London to Moscow for their art of church supplies of silver and gold. This is the place where Sotirios Boulgaris was born, the founder of the famous Bulgari Jewelry House.

After enjoying our traditional dessert in the small cafe in the square, we started to explore the village. We stopped at the church of Saint Nikolaos with the stone bell tower. Walking in Kalarites, we saw that everything was stone-built—roofs, fountains, paths, courtyards, churches, beautiful mansions.

You do not need much in this place.

All you need is a mind and soul open to the teachings of people who learned to survive in these ancient stone villages. 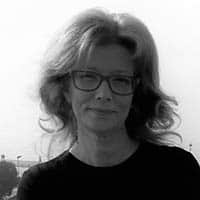 Lia Mageira is a Greek travel photographer and writer. She is a holder of a degree from the University of West Athens. She focuses on Environment and History. Her work has appeared in many magazines and websites, both national and international.