I’ll be the first to admit that when it comes to France, Paris has my heart. Once I arrive in this magnificent City of Lights, it’s hard

to tear myself away from all the glitz, glamour, and amazing experiences France’s vibrant capital offers.

This past spring however, I had the opportunity to attend the naming and launching ceremony of a new Viking Cruise River ship (the Radgrid) in Paris, and afterward visit some quaint French villages on its Seine River itinerary.

Each town was easy to explore after docking in each of its rover slips. But here’s the thing, you don’t have to be on a river cruise to visit these quaint villages since they’re all located quite near Paris.

As a matter of fact, the furthest of these is only 60 miles from the city, and they’re all accessible by bus, car or train.

Every village had its own unique charm, history, and iconic beauty. The more I saw, the more I wondered why I’d never before taken the time to truly immerse myself in Northern France’s lovely quaint countryside gems.

I was enthralled by their quiet lifestyle, yet fascinated by the rich history that oozes from their very pores.

The Town of Saint-Germain en Laye

It’s best known as the birthplace of King Louis XIV, and despite its proximity to the capital, the delightful historic town with its narrow streets, castle, gardens, and markets is a breath of fresh air from the hustle and bustle of Paris. It looks and feels completely different.

This captivating town, located on the banks of the Seine River was founded in 1020 when King Robert the Pious constructed a convent on the site of the present Church of Saint-Germain.

One of France’s greatest Renaissance châteaus, the Château Saint-Germain was once a royal palace that now houses the Musée d’Archéologie Nationale (National Museum of Archeology).

The impressively picturesque park and gardens of this chateau property are the works of Louis XVI’s famed landscape architect André Le Notre. A two-kilometer-long-esplanade runs along the top of a scarp offering impressive views of the Seine. Just beyond the gardens, the formal royal forests of Saint-Germain (once hunting grounds for royalty) are filled with numerous scenic hiking trails. 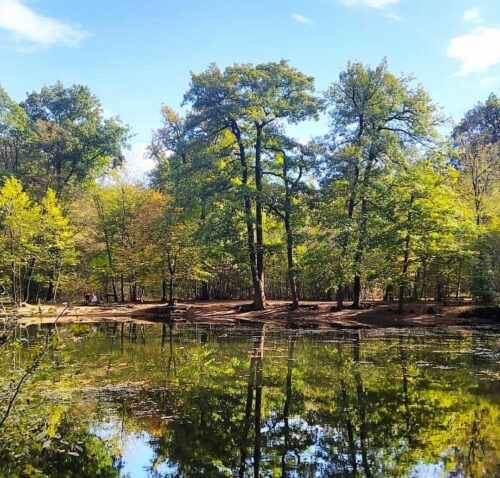 If you’re into archeology, you’ll love browsing through the village’s museum containing objects found in France from the Paleolithic to the Early Middle Ages. It’s really quite impressive.

If you don’t read French however, I suggest having a dictionary or I-phone translator with you as true to French pride, the exhibit information is not in English or other languages.

This magnificent church is the only remaining Romanesque structure in the Paris region. The choir balcony was added later in the Gothic style. Built between 990 and 1010, Eglise is also the oldest church in Paris.

And though its exterior resembles a relatively modest parish church, when we walked inside, we were introduced to a true jaw-dropping experience.

Famous French composter Claude Debussy was born and raised in Saint-Germain and if you’re a fan of classical music, I highly recommend a visit to this small but fascinating museum housed in a 17th-century structure.

Debussy surrounded himself with objects that strongly influenced his music. And the museum does a marvelous job of displaying these artifacts along with his magnificent works in a beautiful tribute to one of France’s greatest composers.

The Village of La Roche-Guyon

It’s no wonder that La Roche-Guyon has been named one of France’s most beautiful villages time and again. The moment we stepped off the ship and strolled through the colorful picturesque gardens, we knew we were in for a real treat.

Located just 1.25-hours from Paris, the town is an absolute postcard-perfect French village with its narrow winding streets lined by vintage houses with wood-paneled facades.

It’s also the gateway to Giverny, the home of famous artist Claude Monet. Unfortunately, the gardens were closed during our visit, but that only means we’ll have to return to experience this botanical masterpiece. And there are so many other treasures to enjoy here.

The beguiling 12th-century Château de La Roche-Guyon is the town’s most emblematic landmark.

Its imposing silhouette dominates a chalky limestone cliff overlooking the banks of the River Seine.

This is an absolute must-do if you’re into castles, especially those that offer strange journeys into the past including ancient troglodyte stairs leading to an old dungeon.

Guests have the option to climb a 115-foot, 284-step cylindrical master tower to the keep. Do it, as views from the top are absolutely breathtaking!

Stroll Through the Charming Village

A fresh, flaky French croissant and a steaming coffee in hand from a local bakery, I was ready for some exploration.

After all, La Roche-Guyon is like walking into the pages of a French fairy tale. I began my journey on the water front path offering magnificent views of the Seine and its picturesque banks.

The architecture in this town is quite impressive. Small boutiques and private homes here reflect a mix of both Gothic and Renaissance. Vine-covered clapboard structures line the multi-leveled winding streets.

An 18th-century stone fountain sits in the center of town square, attracting both the local fowl and of course, the children who can’t resist a refreshing splash.

Probably the second most-photographed spot in the village is the Eglise Saint-Sampson church, perched at the top of town and dating back to the early 1400s.

Walking the hilly winding cobblestone streets to its entrance is all part of the experience. I finally had to enlist a local’s assistance however, as some of the meandering roads here just seem to come to an abrupt end. But, all part of the fun.

The Gothic-style structure is flanked by Renaissance-style flourishes, and includes a beautiful bell tower.

The church still celebrates mass, and though I wasn’t there at the time of these services, a lovely young French lady invited me in to view the interior.

Like so many village churches throughout Europe, what you see inside is vastly different from the more somber exteriors. And so it was with this church with its high Gothic ceiling reaching to the heavens, and colorfully ornate walls and floors.

Just before heading back to the ship, the scent of crepes was wafting through the air.

Somehow, it seemed only appropriate to enjoy yet another of France’s iconic foods in this charming village with its friendly townsfolk.

The Middle-Aged Hamlet of Vernon

Another absolutely charming provincial town, Vernon in South Normandy is truly reminiscent of the Middle Ages with its cobblestone streets and half-timbered houses built between the 11th and 16th centuries that feature magnificent wood carvings. And we could not resist its quaint and unique boutiques begging us to browse.

Vernon was founded by the famous Viking Rollo in the 9th century where an island in the Seine made for easy crossings. It became a strategic transit point between Paris and Rouen (Normandy) eventually requiring fortification from enemy attacks.

Without a doubt, the most iconic structure and cultural touchstone in the village is the quaint medieval millhouse set on a 12th century rustic bridge straddling the waters of the Seine. Built in the 16th century, the mill was one of five in the area powered by water wheels. 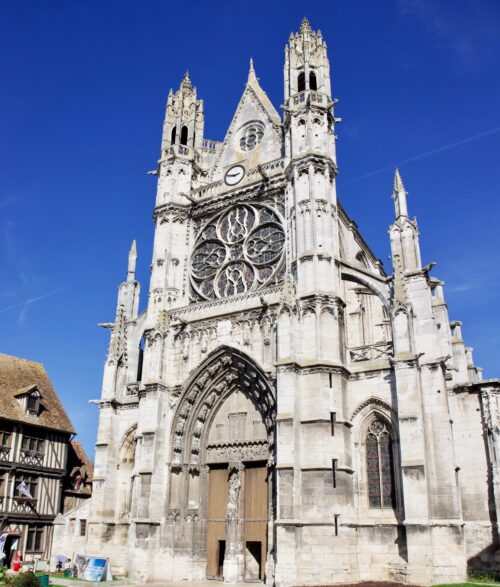 By the end of WWII however the mill had sustained considerable damage and was in danger of collapse.

It was the people of Vernon who took it upon themselves to restore and maintain the iconic structure, today the landmark symbol of the town. Though guests cannot go inside the mill, the view alone is totally worth the visit.

You’ll find yourself as we did, doing a double-take on this 11th-century Gothic cathedral that looks so much like Notre Dame!

The only difference is the old timbered houses surrounding the church here instead of city buildings. It’s one of the oldest churches in the Normandy region. Constructed with limestone, it’s absolutely stunning – both inside and out.

The cathedral contains a 13th-century lantern tower, a flamboyant Gothic-style rose window, along with other impressive interior stained-glass windows.

All but one of its original windows had to be replaced after WWII bombing raids. A 17th-century gallery pipe organ beautifully restored in 1979 is a magnificent artifact that shouldn’t be missed. 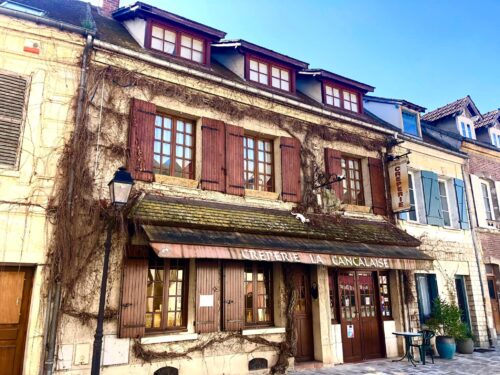 Strolling through the Village

When I picked up a map at the 15th-century two-storied cantilevered Vernon tourist office, the representative gladly pointed out the main things to do and see in Vernon.

But then with a glimmer in her blue eyes, she advised me to “prenez votre temps et profitez” (take your time and enjoy).

As I strolled through the charming streets of Vernon, something marvelous seemed to appear around each bend in the road. And then I completely understood.

These small villages of northern central France are surprisingly beautiful.

Their very presence invites visitors to slow down and enjoy the simpler life and take in the almost indescribable historic structures that capture and reflect their storied pasts.