Mexico: The Land of Amazing Volcanoes

“Permission from the volcanoes was required in order to live in Xochitécatl,” the inscription read on the spiral pyramid I was standing on top of.

Volcanoes, dormant or active, surrounded us, and we were standing on top of a shorter, extinct one, enjoying a visit to one of the oldest archaeological sites in the Puebla-Tlaxcala Valley of Mexico.

Xochitécatl was one of our stops on a weekend trip to the area. We were standing on a circular pyramid, dedicated to the Aztec Wind God, Ehécatl, one of the Creator Gods. However, ancient people inhabited the site long before the Aztecs. 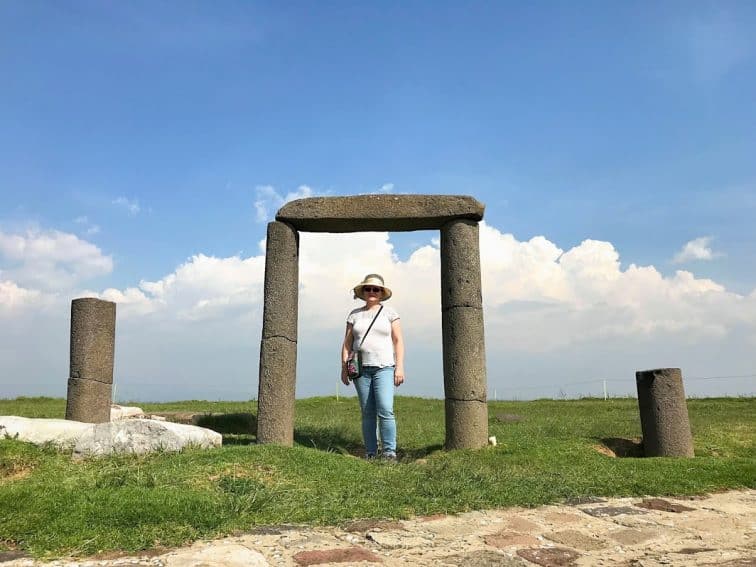 In its earliest stage, Xochitécatl dates from about 800 BC. Built on an extinct volcano, it sat high above the surrounding Valley, and they used this vantage point to their advantage.

Expanding its existing structures and adding more, by 350 BC it became a powerful center, controlling the surrounding area.

But the volcano Popocatépetl didn’t allow people to live there past 150 BC when one of its most powerful eruptions forced them to abandon the site.

A few centuries later, around 600 AD, when they settled back in the area and built the neighboring site of Cacaxtla, they used it again, as a ceremonial center.

I was contemplating this while standing on top of the pyramid at the site dedicated as a whole to Xochitl, the Goddess of Flowers and Fertility. The ancients in the area worshipped her and built the most impressive pyramid, the Pyramid of the Flowers, in her honor.

Though the oldest structure at the site, the Pyramid of the Flowers didn’t become the largest overnight. Dating in its earliest form as far back as 800 BC, they kept adding to it until the Spanish Colonial Times, in the 1500s. The result is a massive terraced pyramid, similar in size to the pyramid of the Moon in Teotihuacan.

When I climbed it, I walked through a doorway of stone columns connected with a lintel on top. More broken columns lay on the ground, around it. This was all the remains of

an ancient temple. Looking out from the top I saw the whole site, with the plaza below and the spiral pyramid on the far side. From the other side, I had a perfect view of the neighboring site of Cacaxtla.

The reason for our whole trip was to see the murals of Cacaxtla. I’ve heard and read about them for years, as being of Mayan design, thousands of miles away from the known world of the Maya. When I finally saw them, they proved to be more vibrant, more colorful than I ever expected.

The Platform, Grand Basamento, where the murals are, is much larger than I expected, and the base for the most important buildings at the site, the main civic and religious buildings, and also includes the homes of high-ranking priests and officials.

This huge base is covered by a sheet-metal roof, the second largest in the world (the largest one is in China, covering another archaeological site). A walkway leads us through it, away from the most fragile areas.

We walked through the Palace, a complex of rooms and patios when we reached the Red Temple and I saw the first mural.

I was just standing there, stunned, staring at it. I’ve seen Mayan murals before, but none this bright, vibrant, with its colors so vivid.

The oldest found so far at this site, it dates from about 600 AD, yet it looks like it was abandoned merely decades ago.

When I was finally ready to move on, we walked by small rooms followed by the Temple of Venus with two more murals depicting human figures, painted blue, on separate columns.

Next, we reached the longest and most famous mural of Cacaxtla, the battle scene. 72 feet long and almost six feet tall, parts of this mural are intact, and most of it is recognizable.

Gory details of battles were not what I like to look at, but the colors are beautiful even after all this time.

But the next ones we saw topped them all. After climbing a few stairs, we reached the most spectacular murals at the site. Covering two walls of a central doorway, these are more vivid and clear than any of the other ones.

Two different figures stand on the two sides, both on a vibrant red background. The sides of the doorways and a wall behind it are also filled with murals though not as clear as the ones in the front.

Before leaving the site, I looked out to the surrounding Valley. On the North side, we had a perfect view of the Pyramid of the Flowers and understood its full size for the first time. From this vantage point, I could tell the site was standing on a small, long-extinct volcano, above its surroundings.

Cholula and the Largest Pyramid in the World

Moving on from the ancient sites, our next stop was the modern city of Cholula, home to the largest known pyramid in the world. A colorful colonial-style city, Cholula is famous for its Great Pyramid and its many churches.

Locals claim the town has 365 churches, one for each day of the year. It’s an interesting thought, but, in reality, the number is closer to 159. It’s still impressive for the size of the town.

But I visited none of the churches in Cholula. Other than stopping in the Zocalo, or center of town, we wanted to see the Great Pyramid of Cholula, the largest by footprint and volume, in the world. So why is it not famous, or at least as well-known as the pyramids of Egypt?

The reason lay in its setting and the fact it is still used to this day, though not as it was intended. The Colonial Spanish church on top holds masses every Sunday.

But no one knew the hill the church stands on was once a man-made structure for centuries. By the time the Spanish settled in the area, the ancient pyramid looked like a hill, so they built their biggest church on top, overlooking the city.

It wasn’t until the end of the 19thcentury when archaeologists realized that a pyramid lay under the hill, and they didn’t excavate it until 1931.

By then, the church on top was an established protected landmark, and they couldn’t touch it. Without demolishing it, they could not unearth the pyramid.

So, instead, they dug tunnels through it to learn about its history.

From the outside, the pyramid still looks like a hill topped by a colonial style church.

We entered the pyramid through the tunnels. Of the five miles they dug out, they opened 800 feet for the public to walk through. Inside the tunnels, we noticed ancient stairways, built during earlier phases of the pyramid, some dating as far back as 200 BC.

Pre-Columbian civilizations of Mesoamerica never destroyed earlier pyramids. Instead, they buried them intact and built the new ones on top.

They followed the same pattern here, and by the 9thcentury AD, after six phases of construction, the Great Pyramid of Cholula became the size it is today.

But they eventually abandoned it and by the time of the Spanish conquest, it was so overgrown with vegetation that no one recognized it as man-made.

We walked out of the tunnels on the South end of the pyramid where we turned right to visit the excavated archaeological site.

Though only a small portion of the structure is exposed, we could tell its immenseness. After walking through a few plazas and the Patio of the Altars, we turned the corner and noticed a smaller pyramid on the Plaza. We climbed it, then continued towards the top of the Great Pyramid.

It was close to noon by this time and the sun was beating down on us. Huffing and puffing, I managed the long climb and reached the top of the pyramid where we entered the premises of the church dedicated to the Virgin of the Remedies, the patron of the city.

Mass started while we sat on top of the hill-pyramid. Instead of holding it inside, they had seats outside, under a huge tent. The priest came out wearing a bright green robe, then proceeded to the stage, where a music band playing guitars, drums and maracas accompanied his sermon.

As fun as it was, we didn’t stay for long. As we were leaving, we heard the music and sermon all the way down while descending the pyramid.

Although Puebla City if the fourth largest city in Mexico, walking in its center had an unexpected cozy feel to it. As I walked around its historic center, I understood why it is a designated UNESCO Heritage Site.

Founded in 1531, the city of Puebla de Los Angeles, is a colorful colonial city, filled with historic churches and other exquisite buildings, with architecture ranging in style from Renaissance to Mexican Baroque.

The Main Square, or Zocalo, is still the cultural, political and cultural center of the city, centered on the famous fountain with the Statue of Archangel Michael dating from 1777. On the Sunday afternoon, when we visited, it was teeming with life; families and other locals sitting or walking around this fountain and the shaded trails around.

The most important buildings of the city surround the Zocalo, starting with the famous Cathedral of the Immaculate Conception, that dominates the area. Like most famous churches, the Cathedral took a few centuries to complete, starting from 1575 and adding the final tower in 1768. Its towers are the tallest in Mexico, with a height of 200 feet.

The City Hall, built in 1906 sits at the opposite end of the Zocalo, showcasing a French-Spanish Renaissance style, while historic buildings housing restaurants and a smaller church flank its other two sides.

A few blocks from the center, we visited the Church of Santo Domingo, with its famous chapel, the Capilla del Rosario, the most decorated Baroque style church in Mexico.

As great as visiting these churches were, I enjoyed walking the streets of Puebla Center, filled with colorful buildings, the walls of many of them covered with the Talavera tiles the city is famous for.

No matter where I was, in Puebla, Cholula or the other sites, looking up I always saw at least one volcano, most of the time the tallest one, Popocatépetl, looming over in the not-so-far distance.

As we were flying out, I looked at its smoking top. It was erupting, building up the lava around its base, though keeping it contained.

However, not more than a week after we returned, I watched the news of this active volcano erupting, filling the cities of Puebla and Cholula with white powdery ashes, rendering people indoors, or walking with masks covering their faces. 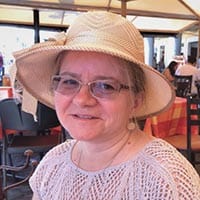 Emese Fromm is a Phoenix-based freelance travel writer and translator who grew up in Transylvania. Besides GoNOMAD, her work has appeared in other online publications like Matador Network, DesertUSA, MapQuest Travel, and more. She created and maintains the site Wanderer Writes where she shares her personal travel stories, many of them about Mexico since it is one of her favorite places. When she’s not writing, she’s traveling with her family, hiking, reading or knitting.