Getting to Northern Laos feels like a mission when you’re in Vang Vieng or Luang Prabang, but it’s so worth getting off the tourist trail to reveal the intriguing historical underbelly of this underrated country.

Not many foreign tourists get to Phonsavan to experience the mysterious Plain of Jars, but visiting obscure destinations is a great opportunity to get under the skin of a place without the madding crowds.

It is a recent addition to the UNESCO-Heritage list as it was awarded the status in the summer of 2019 so tourism may start to increase as a result.

The bus journey to Phonsavan took 12 hours from the equally unknown area of Sam Neua where we’d been to see the Vieng Xai war caves used during the Secret War with the U.S. Laos is full of mystery and secrets and as soon as I found out about the Plain of Jars in the pages of a battered old Lonely Planet guidebook, I knew that I had to visit.

We are lucky to be able to visit the Plain of Jars at all, as the entire region was heavily bombed in the Indochina wars, yet it’s still standing so that tourists can still wander around and wonder. During the Vietnam War, 270 million cluster bombs were dumped over Laos by US fighter pilots before they flew back, and 80 million of those didn’t detonate on impact, so it’s a monumental job to get rid of them.

Around 90 jar sites are known to archaeologists, but only 10% have been cleared of deadly unexploded ordnance (UXO). Needless to say that travelers need to stick to the designated paths and areas when exploring the archaeological sites.

Organizations like the Mines Advisory Group (MAG) have done an incredible job and you can visit the visitor center on Phonsavan’s main street to learn more and make a donation. The red and white MAG markers denote where areas have been cleared of bombs and I drove past their vans on their way to a bomb disposal site.

In Cambodia, they’re using African pouched rats to clear landmines as they can be trained to sniff them out.

The jars were created by an Austro-Asiatic civilization and are thought to date from Southeast Asia’s iron age, from 500 BC to AD 200.

There used to be smaller jars, but they were stolen years ago. Some of the remaining ones can be 3 meters tall and up to 1 meter wide, it is thought that they can weigh the equivalent of 3 cars, making them far too big to steal.

The 2,500-year-old mystery of the jars has never been fully solved. Some theories are stronger than others, it’s pretty much accepted that the jars were used as burial urns and as part of traditional funeral ceremonies.

Legend has it that they were used to brew strong rice wine for giants to celebrate victories in battle and that they held whisky for a giant that lived in the mountains.

Biking to the First Jar Site

We hired a bike to get to the first jar site, romantically named as ‘jar site 1’. There are three altogether that can be found near Phonsavan and visited safely.

The furthest site is jar site 52, but you need to go on the Ban Phakeo trek with a guide for two days to get there.

Jar site 1 is the biggest of all the sites and it has a visitor center to give you more background to the history of the Plain of Jars, including the wars and bomb-clearing that have happened around it.

The jars are haphazardly strung across the green fields and gathered together in clusters around a small cave that was used as a lookout in times of war but is now filled with burning incense. I didn’t think that the cave had very much significance when I explored it, but an amateur French archaeologist thought differently.

She believed that the cave was a crematorium and the ashes were put in the jars – much like funeral traditions today.

Why are the Jars so Huge?

Human remains have been found inside the cave but it wouldn’t explain why the jars were so huge if they didn’t contain actual bodies. Laotians have refuted her theory and they say the cave was used as a kiln for jars molded from clay, sugar, sand, dung, or animal hide.

It takes another 30 minutes to travel to jar site 2 which is further out but it’s a different experience to site 1 as they’re scattered around woodlands. Site 3 is also in the forest, making it quite similar to site 2 and meaning that very few visitors get this far. The worst part about site 2 is that it is full of insects so you get bombarded with them when you peek into the jars.

I peered into several jars and they were usually full of leaves, water, or soil but I kept looking just in case there was something fascinating lurking inside!

In the past, bronze instruments, tools, and ceramics have been discovered within (there were probably more but they were stolen).

The best part of site 2 is that there is a tree growing through the middle of a jar as nature starts to reclaim the pots.

The great part about traveling around the jar sites is that it’s a great opportunity to see the Laotian countryside as well as getting stuck in the occasional cow traffic jam!

The worst part was that we went to see a waterfall near jar site 2, but it has been reduced to a trickle by a dam that had been built upstream and the view was ruined by a road being built next to it. Development that ruins natural wonders is always sad to see, so we finished our day there and drove back into town.

Phonsavan has some good dining options as it does cater to a small stream of tourists so we enjoyed some lovely Laotian food that evening. We met a Greek man who was working as an engineer on a nearby infrastructure project, so he’d moved with his family.

He really didn’t like Phonsavan which I could understand as there really isn’t a lot to do there, once you’ve seen all the jars and the surrounding countryside. When we left for Paksan, the bus journey was every time as arduous as the one from Sam Neua but I was still glad we came.

In all my years of traveling (and there have more than I would care to admit to), I’ve never seen anything quite like Plain of Jars. Getting off the tourist trail and exploring rural Laos is really worthwhile as it really is the underrated jewel of Southeast Asia.

Losing the crowds to explore one of the most intriguing mysteries that this region has to offer made the long journeys to get there completely worth it. Laos truly is a green and karst-studded land with many secrets to share, if you’re prepared to go and look for them.

Phonsavan is the capital of the Xieng Khouang region, it’s fairly compact but it does have decent accommodation and places to eat.

You can get to Phonsavan from Paksan, Sam Neua, and Vientiane. From Sam Neua it takes 10 hours and costs 100,000 Kip. Buy tickets directly from the bus station to avoid paying commission.

We stayed at Sipanya Guesthouse in Phonsavan, a great budget hotel right next to the bus station.

Various agencies on Phonsavan offer trips to the jar sites, or you can take a moped or cycle to jar site 1 (jar site 2 is too far away).

On the main street, Bamboozle is a good restaurant for good Laotian, Thai, or Western food and Cranky-T is good for coffee or breakfast. There are also minimarts and a bakery if you’re on a tight budget.

Always stick to pathways and designated sites in case of unexploded ordnance.

Read Jen’s story about the Secret Caves in Laos 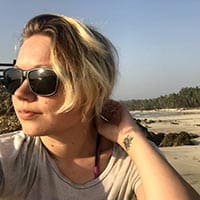 Jennifer Sizeland is an author, freelance writer, and producer with a travel blog that focuses on ethical and eco-friendly travel and living. Twitter and Instagram: @landofsize. Website: www.landofsize.com