Versailles, Where the Palace Hotel Awaits

This year, the Palace of Versailles celebrates two milestones: the 250th anniversary of the Royal Opera, built for the wedding of Marie Antoinette to the future Louis 16th (May 16-17, 2020) AND the opening of an exclusive new 5-star hotel inside the palace grounds (Date some time in 2021).

When Versailles reopens, there are many great reasons to return to this UNESCO World Heritage site and appreciate it from a fresh perspective.

Eight million people a year make the trek to Versailles to get a peek at life behind the gilded curtain, Marie Antoinette-style. I’ve been there twice, back in college and then again years later with my husband, and it’s always left me conflicted.

Sure, it’s opulent and impressive and filled to the brim with museum-quality art & architecture.

But for me, it’s honestly been hard to humanize the place or identify with the excesses of the aristocrats who lived there. When I travel, I want to make a connection to the people, not just the places I go.

Sleeping in the Palace

Soon there will be a surprising new way to make that kind of personal connection to Louis, Marie Antoinette and the gang. It’ll cost you, but it might just make your bucket list of Must-Do’s.

That’s because, for the first time in history, you can rest your head where Marie rested hers (before she lost it, that is). Not exactly the same place, but hotel guests will be pretty darn close.

The Airelles Chateau de Versaille, Le Grand Controle will be an exclusive 5-star hotel with only 14 rooms (9 suites and 5 doubles, starting at 1300 euros/ night including breakfast).

There are other hotels at the edge of the 200-acre Royal Domain, but this will be the first to offer guests special access to the Chateau and some other pretty cool experiences.

“Guests will be able to retrace the footsteps of Louis XVI and Marie Antoinette unencumbered, with exclusive experiences in The Palace and grounds,” the brochure promises. Experiences like boating on the Grand Canal, sipping champagne.

Details Fit for a King

Hotel architects and designers have studied the Palace archives to painstakingly recreate an authentic 18th-century experience, and they’re furnishing the new hotel with art and antiques from that period.

Famed Chef Alain Ducasse will helm the signature bar and restaurant, and the property will feature both a spa and an indoor swimming pool. Once opened, these 14 rooms may become the most coveted of the Palace’s 700 or so.

A Versailles on TV Fan

Travelers like Michael Hall, a fan of the TV show who visited Versailles last October for the first time, are excited at the prospect.

“I mean it’s a pretty great address, right? It would be like staying at 1600 Pennsylvania Avenue. You’re a part of history and you get to stay somewhere that Louis the 14th and 15th and 16th stayed and Napoleon Bonaparte stayed. So that’s a cool thing.”

Once French tourism resumes, expect a stay at Versailles to join the list of singular European experiences.

Hall is glad he invested a full day in Versailles, soaking up its history and engineering marvels. Two hours there, the typical tour, barely scratches the surface.

“Everyone flocks to the Hall of Mirrors and it is amazing. Its view of the gardens and fountains is unbelievable. The engineering was so precise that the Palace lines up on a perfect East/West axis. That means even before electricity, the mirrors captured the setting sun, bathing the Hall in light.”

Hall also enjoyed walking the paths and discovering Versaille’s secret gardens and fountains, which took 40 years to complete. Louis is said to have valued the gardens as much as the palace.

Particularly striking was Marie Antoinette’s hideaway, Le Petit Hameau or Little Hamlet. Hall says he left there with compassion for the young queen, who’s been judged harshly by history.

“Here’s this young 14-15-year-old girl from Austria who’s plucked from her home and essentially placed somewhere with no privacy, no normalcy, married off to a stranger. And there’s a loneliness and a real melancholy to that. The Hamlet was her attempt to create some sense of normalcy in this place—her own town with the butcher, the baker, the candlestick maker.”

In a sense, Marie hungered for what could be found right down the hill in the town of Versaille and still is: a thriving town. The historic Market of Notre Dame (Place du Marche’ Notre Dame) has been operated since King Louis’ day.

Taking up an entire city square with multiple buildings and kiosks, it doesn’t disappoint. Whether you want a full-on feast or the makings of a simple picnic, you’ll find it there.

Offering everything from baguettes to Brussel sprouts, mackerel to macarons, it’s one of the oldest and largest markets in the region.

Here, depending on the day of the week, you’ll find produce, fresh seafood, butchered meats, different types of birds, cheeses, and desserts. You have third-generation French butchers working there in families that have passed down their traditions.

“We enjoyed a wonderful wine and cheese pairing. We drank Sancerre with a delicious assortment of local cheeses,” Hall explains.  “After that, we shopped some more (you’ll find everything from clothing to furniture) and walked back through town.

Along the way, we stopped at Les Biscuits de Madame Georges for coffee and crepes.”

There’s more than just gastronomy to savor. Versailles offers a bustling art scene as well. The world-class Ecole D’Art Mural de Versailles is a school dedicated to preserving the art of mural-making, training today’s artists in this storied decorative tradition. You’ll find their work on display in unexpected places around town.

Street art has found a home here too, with everything from playful murals to parking-bollards decked out as Lego characters. They are offered during the summer (May to August) on Saturdays at 3 PM on May 16-30 and June 20th and every Wednesday at 5 PM during July and August.  The tours are only available in French.

It’s fun to walk the winding streets on your own and search for art where you least expect it—Scavenger-Hunt style.

There’s even an app (en francais) called Beekup that describes every work of art within Versailles city proper.

Almost three hundred forty years since Louis first put Versailles on the map, it continues to charm, to nourish, to amuse, and to inspire. There have always been many reasons to make the trip for half an hour from Paris.

And this year, 2020, it’s reinventing itself again with new and exciting ways to walk in the footsteps of history.

Another Pandemic as Prelude

Ironically, the Palace at Versailles may owe its very existence to another Pandemic. Long before there was a Palace on-site, Versailles was a much-beloved Royal Preserve of 495,000 acres where Kings and noblemen hunted.

Louis 14th’s father had a small hunting lodge there and when Smallpox hit France, he sent his vulnerable three-year-old son to the lodge to wait out the danger.

This early Social Distancing saved young Louis’ life and sparked his own love affair with the area. By the time he was a teenaged King, he began dreaming of even more ambitious Social Distancing—this time from the politics and intrigue of Paris. He would build a world-class Palace and spend the next seven decades perfecting it.

Versailles is half an hour from Paris and easily accessible by car, taxi, bus or train. The RER C line from Paris arrives at the Versailles Rive Gauche station, about five minutes’ walk from the Palace. The RATP bus 171 runs from Pont de Sevres metro station to Versailles. Both hubs are close to the town center, due east of the Palace and a ten-minute walk from its gates. 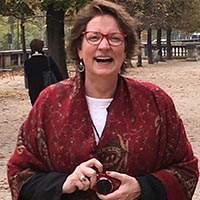 Diane Crabtree is an Emmy-nominated writer & producer based in Nashville. After three decades in television, she’s now turned her focus to the open road. She makes an annual pilgrimage to study each summer at Oxford University. When her husband David doesn’t tag along on her adventures, her 12-pound rescue dog Atticus is her favorite sidekick.