A Texas town full of history and charm

In the quaint Texas Hill Country town of Fredericksburg lies an amalgam of history, cuisine, wine, art, and charming cottages unequaled in most other places.

The coincidence of German founding heritage within a backdrop of rolling hills filled with carpets of bluebonnets and springtime flowers, makes for a town that is quintessentially unique and appealing with its cultural traditions and landscape beauty. Juxtaposed against this backdrop is the contemporary alongside the traditional.

The Germans are coming
In Germany, the years of 1830-1849 are known as the Great Migration. This was a complicated time of great political unrest and severe economic depression, causing many disaffected men of education and science to immigrate. What many people don’t know is that many came to Texas via the port of entry in Galveston.

The “Society for the Protection of German Immigrants in Texas” was founded by German nobility to help Germans in their exodus for Texas.

Fredericksburg was founded in 1846 by Baron Otfried Hans von Meuseback, new Commissioner General for the Society. He would later anglicize his name to John O. Meusebach.

The Germanic founding fathers were aware of threats from the Comanche and knew that peace must be brokered to preserve the fledgling community.

Under great personal danger, Meusebach met with the Comanche to initiate signing a peace treaty, one based on a mutual sharing of the land where both parties would co-exist in peace and friendship. The Meusebach-Comanche treaty remains unbroken to today.

The Pioneer Museum captures some of the stories of the hardy people who built and settled the community of Fredericksburg. Reconstructed buildings help tell the story of a proud people who not only struggled to survive in the new land, but were able to preserve their German heritage and ultimately thrive.

The buildings take you on a historical journey spanning the years from the 1840s to the 1920s, and in the process, show how lifestyles changed and improved.

Highlights include the Weber Sunday House – a typical one-room home that many Germans built in town as a place to stay for Sunday worship and shopping; the Kammlah Barn – an original structure made of limestone; the Kammlah Homestead – one of the first German families to settle in Fredericksburg, and the Smokehouse were meat and sausage were cured.

A landlocked town delivers an Admiral

This small town is also the birthright of Admiral Chester W. Nimitz. His grandfather, Charles H. Nimitz, a German immigrant and former seaman, owned a hotel in the heart of the town that was decked out with a “steamboat” facade. It is here where young Chester would spend his first six years, under the tutelage and wisdom of a grandfather who he greatly admired throughout his life. (His father, Chester Bernard Nimitz, died before he was born).

A combination of his German heritage and the rural Hill Country of central Texas helped to shape a future leader with defining traits of positivism, industriousness, efficiency, and disciplined practicality.

Later, a youthful Nimitz would aspire to attend West Point, but after receiving a rejection, he turned his ambitions toward the Naval Academy instead. Fortunately, there was an opening and he would graduate seventh out of 114 midshipmen in the Class of 1905.

Though he grounded his first ship, he learned from his mistakes. His focus was always on learning from mistakes and honing in on the enemy’s weaknesses. Admiral Nimitz coordinated the Pacific War offensive that ultimately led to unconditional surrender by the Japanese.

The National Museum of the Pacific War is a tribute to all services and all those who served in the Pacific theater during WWII. This is a world-class Smithsonian-quality museum and should be a “bucket list item” for any veteran of any branch and any war.

It chronicles the seeds of conflict leading to the infamous attack on Pearl Harbor then it progresses to Okinawa as the bloodiest island battle of the Pacific War, and finally to the Japanese surrender and final victory.

Because it focuses exclusively on the Pacific, it is able to examine more closely many issues overlooked in more general interest military museums.

As might be expected, there are many places in and around town that feature German cuisine. Try the Old German Bakery & Restaurant on Main Street for breakfast and lunch. They have been serving Fredericksburg for over 40 years and everything is made from scratch. Choose from authentic German pancakes, European pastries, and even their “House Schnitzel.” Just be forewarned that portions are ample.

Open for lunch and dinner, The Auslander Restaurant & Biergarten, located on Main Street, has been serving authentic German cuisine for over 20 years. Be sure to try their red cabbage and any of the beers.

Otto’s German Bistro is the place to go for a gourmet twist on German cuisine. Open for dinner only, they use locally sourced produce and meats. Local beers, wines, and handcrafted cocktails complete the dining experience. They are located across the street from the National Museum of the Pacific War.

For those preferring more of a Texan emphasis and flair, try the Cabernet Grill for dinner – rated among the “Top Ten in the Nation” by TripAdvisor. On the southern edge of town, the restaurant is located inside a building modeled after an old cotton gin. What you can expect is great Hill Country cuisine along with a selection of some of the best Texas wines. Steaks are a specialty.

Make sure to stop at Das Peach Haus to sample one of Fredericksburg’s culinary treasures – Fischer & Wieser Specialty Foods. This is where you can pick up a jar of The Original Roasted Raspberry Chipotle Sauce®, the number one specialty condiment sold in Texas. Or take home a handful of various sauces, mustards, salsas, salad dressings, pie fillings, pasta sauces and appetizers to spice up your flavors in the kitchen. (Better yet, have them mail it to your home).

Many people are unaware that Texas has a reputation for growing high-quality grapes and producing world-class wines. In particular, Fredericksburg is an American Viticultural Area (AVA) known for having a similar terrain to the wine growing regions of central Italy and the Rhone Valley in France. And because of the unique combination of the Texas Hill Country sun and soil, many award-winning wines are coming from this region.

Maybe that is why this is the second most visited wine region in the United States according to Orbitz Travel, and one of the nation’s fastest-growing wine destinations. You would be hard-pressed to find a greater diversity in wines than what they have along the Texas Wine Trail. With more than two dozen wineries and tasting rooms in Fredericksburg alone, you won’t have to travel far to sample the fruit of the vine.

Located in the Texas Hill Country between Fredericksburg and Stonewall, Becker Vineyards was established in 1992 by Richard and Bunny Becker. What you will find here are some of the best-of-the-best wines. They have been featured in Wine Spectator, Food & Wine, and served in the White House.

Try a tank, barrel, and then a vertical taste of Cabernet Sauvignon in their Library, hand-picked from the Becker’s private collection. Wine tastings are also available in the tasting room.

For a “Tuscany in Texas” feel, stop at Grape Creek Winery & Vineyards where you can sample their many award-winning wines. Owners Brian and Jennifer Health recently took a Gold/Best for their super-Tuscan style Bellissio from Pacific Rim.

For wine made in the same fashion as “old world” Riojas of Spain, go to the family-owned and operated Pedernales Cellars. Here you will find benchmarked Tempranillos and Viogniers. Ask to taste the Tempranillo 2009 – a vibrant, aromatic, full-bodied varietal that easily stands on its own.

What would a town be without art?

Fortunately, in Fredericksburg, there is no shortage of art, artists, and artisans. With over a dozen galleries representing a collection of mediums, they range from boutique showrooms with working studios to national art galleries with an international presence.

Some of the many collectible artists that were inspired by the Hill Country include Seth Eastman, Richard Petri, Herman Lungkwitz, and G. Harvey.

At Agave Gallery you will find a collection of original works of art by 18 Texas artists, including the owner Bennett – Texas State Artist in 2010. Paintings, etchings, sculpture, jewelry, engraved silver buckles, and photography are showcased in a historic 1870s limestone Sunday House.

From realism to impressionism, Fredericksburg Art Gallery specializes in original art by renowned artists from Texas and beyond. Emphasis is n wildlife, western, still life, portraiture, and landscape and includes collectibles such as Phil Bob Borman, Cynthia Bryant, Jim Phipps, and Kay Walton.

At InSight Gallery you encounter a select group of about 60 of the finest painters and sculptors working today in landscape, figurative, impressionistic, still life, wildlife, and Western art. The gallery is located in the renovated 1907 Schwartz Building with natural wood floors, high tin ceilings, and rough limestone walls.

Fredericksburg Herb Farm has 14 Sunday Haus Cottages based on the design of early historic Fredericksburg “Sunday Houses.” All are located in the serenity of a garden environment with a spa on the premises.

The Hangar Hotel is a unique aviation-themed experience reminiscent of the South Pacific during WWII. The hotel and grounds take guests back to the 1940s but are updated with today’s luxuries and conveniences. Hidden treasures are everywhere on the grounds and include airplane memorabilia, USO history, and the romance of a bygone era.

Sugarberry Inn is one of the newest downtown lodging properties. A total of 12 custom-built cottages and a historical main house provide high-end comfort for a celebration or quiet getaway.

Part of The All Seasons Collection, the Wine Country Cottages offers 13 unique cabins, including the Tank House and the Loeffler-Weber Cabin, the oldest Sunday house in Fredericksburg. Most have outdoor hot tubs. Inside are cathedral ceilings with exposed wood beams, stained wood accents, king-size beds, fireplaces, copper sink wet bars, and flat-screen TVs.

The German-Americans of Fredericksburg

Almost 170 years ago, many German immigrants came to Texas via the port of entry in Galveston. Since many were from the Rhine area, it was logical that the town would be laid out in a very similar fashion to their German villages that straddled the Rhine. And so it was that they built wide Main Streets where artisans, merchants, and grocers could sell their wares.

Today, the Fredericksburg German-American community thrives while still honoring their German heritage. The only difference is that the flag they salute comes in the colors of red, white, and blue – or maybe it’s just a tad Prussian blue. 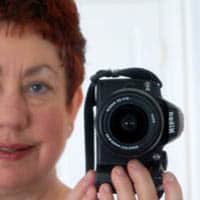 Karin Leperi is an award-winning travel writer and photographer with around 1,500 published bylines in over 95 outlets. Her interests run the gamut from travel, culture, cuisine and cruising to photography, nature, wildlife, and the environment. Her travels have taken her to 94 countries and she is looking forward to meeting the “100” countries milestone.