Few introductions to a country can be as exhilarating as landing in Havana‘s José Martí International Airport, hopping in a 1950’s classic car and cruising through crowded back streets with the top down, before arriving at your hotel or casa particular.

Although there are 15 municipalities that make up Havana, there are three main areas which you are likely to visit while you’re there, and each are as different from each other as Cuba is from its neighbors.

Where you choose to stay will ultimately form your overall impression of this colorful capital and the country as a whole. If you visit all three corners, you’ll have a much better understanding of Havana’s many identities and the remarkably complex structure of life and culture in Cuba.

Founded by the Spanish in 1519, this is the city’s colonial masterpiece and it’s also where most of the tourists end up. With nearly 3,000 buildings, many of historical significance and interest, it’s no surprise that this is where tourists generally choose to spend most of their time. Every narrow lane, broad boulevard and sprawling plaza is lined with perfectly preserved works of architectural art.

Latin and Rumba music echoes off the walls of these lofty antique structures and you’ll find a place to dance on nearly every street corner.

This part of Havana is electrified with a communicable energy that you will feel moving through you with every step that you take on the uneven cobblestone streets. Just watch your footing because with so many sites to look up at, people have been known to trip and fall!

On the northern shore of Old Havana, you’ll find the Malecon, an expansive seawall guarded by the 15th century fortress of Castillo Del Morro. The ocean road stretches all the way from Havana Vieja to the Almendares River, so it’s accessible from all three of the areas that are listed in this article.

Many of the city’s most impressive sites can be found within a few minutes’ walk of the Malecon, including Plaza del Armas, Plaza Vieja and Plaza de la Catedral. You’ll also find the best restaurants in Cuba that serve up some of Cuba’s most delicious dishes! At night, the seawall comes alive, when families and friends meet, mingle and dance under the blinding glow of fluorescent streetlights.

The obvious beauty and undeniable charm of Old Havana comes with some unfortunate drawbacks. With such a high concentration of tourists, it shouldn’t come as a shock that there is also a higher number of jinteros (street hustlers) here as well. If you’ve chosen to only visit this area of the city, you’d be forgiven for thinking that almost every Cuban is out to get something from you.

You’ll make instant friends with just about anyone who passes by, and will be invited out for meals, only to realize that the bill will be entirely in your name, and when it comes time to pay, your new friend has disappeared. You’ll also be quoted double the price for just about everything from bottled water to hand-made souvenirs, so be prepared to bargain or walk away. If you choose to simply pay without questioning, these small scams will add up and you’ll eventually have to up your budget in Cuba considerably!

If you want to feel more like a local – browsing shops, exploring history and soaking up Havana’s vibe without the hassle – then you may find that the next two areas are even better than Vieja.

Sandwiched between well-preserved Vieja and upscale Vedado, Centro Habana is the city’s heart and soul. Much of Havana’s main infrastructure was built around 450 years ago, and while the restored sidewalks and renovated plazas of Old Havana may not show their age, the crumbling structures in Central Havana clearly aren’t trying to fool anyone.

This is a raw and authentic part of the city. Every building here is still a colonial masterpiece, but the broken doors, cracked columns and fractured archways of Centro Habana stand in testament to the city’s antiquity, as well as its tumultuous past.

Much of the deterioration of this part of Havana came during the 1990’s after the collapse of the Cuban-Soviet trade partnership. Some attempts at restoration were started in 1996, but they fell to the wayside as most of the money went into fixing up the more prized Vieja. But it’s not just the decrepit buildings that play a part in making Centro so captivating.

Here you can see the real day-to-day life of Havana’s working class. Early in the day, everyone is on the move, narrowly passing each other and rushing in all directions on sidewalks that are far too narrow for the current population.

In the afternoon, when the tropical sun is high overhead, the crowd seems to dissipate and people are either in their house sleeping, or just relaxing in the shade outside.

But, come 5:00pm, the streets come to life with Habaneros doing what they do best… enjoying life.

It seems like every home is having a party. Neighbors congregate in the street for games of chess and dominos. Friends and family set up tables and chairs on the road, drink rum and chat with each other about their day. Cars honk, swerve and somehow maneuver through crowded back streets, where the sidewalks no longer have purpose.

All of this commotion occurs as the old buildings come aglow in the late afternoon sunlight and the air cools to a comfortable, but still balmy temperature. The social atmosphere doesn’t stop at dark either. You can stumble home, mojito in hand, at three o’clock in the morning and still be shoulder to shoulder with friendly (and often intoxicated) Cubans.

In this part of town, you no longer have to worry about being scammed, hassled or hustled. You will only receive the occasional curious glance or a friendly wave as you go about your walk uninterrupted.

The people here aren’t generally in the tourist business, which is what makes it such an amazing part of town. If you’re visiting Havana, don’t miss a stroll through Centro Habana. It’s the real deal.

This vibrant downtown neighborhood has a more modern and upscale feel. There are still a number of historical sites including Plaza de la Revolución and the National Hotel, but the area is better known for a buzzing night life, great shopping and excellent jazz venues.

The main road, running east to west, is Calle 23 (also known as “La Rampa”) and it is where you’ll find most of the action. The first 5 blocks south of the Malecon are known as the most lively streets in all of Cuba.

At night, Habaneros stroll the fashionable boulevard with the intent to see and be seen. Calle 23 is a virtual runway for the young, the elite, and those “in the know”.

Vedado may not have the obvious charm of Vieja and Centro, but it’s the stark contrast in appearance, charisma and character that makes this part of town so unique.

We recommend coming here for at least a night out, or a daytime stroll, because the area portrays an entirely different side to this astonishingly diverse capital.

There really is no city quite like Havana and that is probably why important figures have lingered here throughout history. Ernest Hemingway, Babe Ruth, Marilyn Monroe, Frank Sinatra and the Italian-American mafia have all spent a considerable amount of time here and the history of their visits is proudly displayed in photo frames and paintings around the city.

What sets Havana apart isn’t just the old cars and colonial architecture, it’s the music, the dance, the spirit and the energy that permeates through the culture here. You can feel the vibe all over town, but a distinct difference can be felt in each of the three areas listed above.

Havana is on the brink of big change however, and with the American market opening up to the north and the slow thaw of US-Cuban relations, this colorful colonial jewel is preparing for a transformation. Get here soon and witness a part of Cuba that hasn’t changed much in 50 years. It will blow your mind. 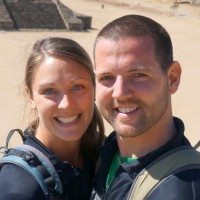 Nick Wharton is one half of the couple behind Goats On The Road, and the bi-weekly travel column on CreditWalk. Their website is designed to show others how to turn their travels into a lifestyle. Masters at making money online and on the road, they’ve been travelling since 2008 and have explored some of the least visited places on earth, finding adventure wherever they go. Read their guide to Independent travel in Cuba.