Paris Without the Romance, But with All the Culture

Paris hardly needs an introduction. It has always been literally the heart of Europe and a romantic getaway for millions of people every year, but stripped of romance, what does the French capital have to offer a cultural mom and daughter?

142 museums and 6,500 years of history. Here are some highlights and hard-earned advice.

After waiting for years for some knight in shining armor to whisk me off on a romantic escape to Paris, I got sick of waiting and decided to take my mom instead. In protest, I tried to avoid everything romantic, which is difficult in Paris and explore the cultural heritage of the French capital.

Paris is popular. In fact, it is the favorite destination of 29 million visitors.

During high season, it feels like they are all there at the same time, and then comes the Parisians, if they have not fled on vacation themselves. Even in June, the city was hot, loud and crowded.

We kissed our intimate sphere goodbye early on. Just riding the metro, which is, however, extremely useful and efficient, will get you closer to a sweaty stranger, than you would ever wish to get, and any idea you might have of a quiet isolated table at a restaurant, or a tranquil sunset on the steps of Sacre Coeur, can go down the drain as well. It is not going to happen. No matter how hard you try, you will never be alone in Paris.

Relaxing by the Seine Filthy rich with culture and history

Make sure you have bought all entrance tickets to the museums online beforehand. You will thank me later for this piece of advice. It will not get you out of standing in line completely, but it will save you a lot of time. 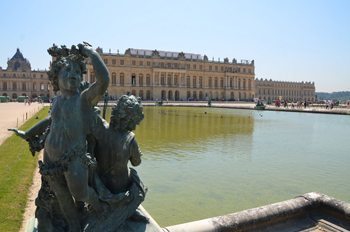 The exquisite Palace of Versailles

Paris is filthy rich with culture and history, and you will never be bored or run out of things to do. 6,500 years of history and 142 museums to explore is only a start. Then there are monuments, parks, and churches.

So to avoid stress on your well-deserved vacation, you might as well get to terms with the fact that you will not see all of Paris in one visit. My mom and I went to Paris with three goals.

We wanted to learn about the French Revolution, see as much art as possible and literally get a taste of the sweet life in Paris.

Talking About a Revolution

Let us start with the revolution. My mom and I are suckers for history, and the French Revolution has always fascinated us. Now that we are right here, where it all happened, we want to know everything in very little time.

One afternoon we hooked up with Classic Walks’ French Revolution walking tour. You can book in advance or just show up and pay on the spot. Honesty, it is the best €20 we spent in Paris.

“Every couple of hundred years, the French have to kill someone.” The words come from our extremely knowledgeable and funny tour guide Stephanie, as she leads us through the streets of Paris and the bloody history of France, from the time of Sun King Louis 14th and King Louis 15th to the last days of King Louis 16th and his wife Queen Marie Antoinette. They both died in the guillotine on Place de la Concorde during the revolution. Read more at ParisClassicWalks.com

We also spent a day at the Palace of Versailles – one of the most magnificent royal estates ever built – outside Paris. This is where the French monarchs lived during the French Revolution.

Yellow train line C will take you straight there. You need a day because the estate is gigantic. Buy tickets online and come early.

Start with a tour of the palace itself and then head for the gardens, where you can buy lunch. The gardens are big and beautiful, and you can walk them or take the tram around at a small extra cost.

It is worth it to save time and strength, at least one way. At the very back corner of the gardens, you will find the smaller palaces of Trianon and Marie Antoinette’s Estate – an idyllic countryside with cottages, a temple, a mill, and a lake.

Marie Antoinette was the most hated woman in France at her time due to her reckless gambling and spending, while poor Parisians were starving. Here she could escape the formal life of the royal court in the main palace. Not all visitors make their way down there, but do not miss this part of Versailles. It is one of the absolute best.

The Louvre, home of the Mona Lisa and other masterpieces. Get tickets online before you go. The art of Paris – from Mona Lisa to Monet

If you are interested in art, Paris will fill you up for quite some time. With a Paris Museum Pass, which gives you free access to 60 museums and monuments in two, four or six days, in hand, we set out to visit The Louvre.

A piece of advice: The Louvre has entrances at the sides as well, and thus not only through the famous glass pyramid. Avoiding the pyramid entrance will save you time.

The Louvre is one of the largest museums in the world, if not the largest, depending on the definition. The museum has about 35,000 objects, and if you were to see them all, it would take you about nine months! You will be confused and overwhelmed at first.

The Louvre is home to many masterpieces, like Mona Lisa, Venus de Milo and the Victory of Samothrace, and if this is your first visit, do yourself a favor and book a guided tour or print the self-guided tour of masterpieces on the museum’s website. You can find no less than 27 thematic visitor trails to suit your interest, also a Da Vinci Code one. Read more here and find out about the Paris museum passes.

Across the river Seine, you will find another great art museum, Musée d’Orsay, which is located in a former railway station from the late 1800s. The museum houses mainly French art from the 1800s and 1900s and a large collection of impressionist and post-impressionist masterpieces by artist such as Degas, Van Gogh, Gauguin, Cézanne and Monet. Read more

Speaking of Monet. We spent a day in Claude Monet’s House & Garden in the village of Giverny. Monet lived here from 1883 until his death in 1926 and created the most beautiful private garden I have ever seen, though most of it is a reconstruction.

Do some shopping in Rue des Francs Bourgeois and Rue Charlot, browse the antique market in Village Saint-Paul (entrance from 17, 21 and 23 Rue Saint-Paul) and check out the well-hidden food market Le Marché des Enfants-Rouges in Rue Bretagne.

Read more at The garden was the source of inspiration for many of the master’s masterpieces, especially his series Water Lillies.

You need a day for this excursion, especially if you want to enjoy the village with its art galleries, restaurants, museum, Monet’s grave and walking trails. Take the train from Paris to Vernon (approximately 45 minutes) and continue on a 20-minute bus shuttle to Giverny. Read more

Paris consists of 20 districts called arrondissements in French. They each have numbers and names, and the river Seine runs right through the middle of them. You will find a lot of hotels and major attractions like the Louvre, the Eiffel Tower and the Arch of Triumph in districts 1, 7 and 8.

Personally, I recommend Marais in districts 3 and 4, the Latin Quarter in district 5, Saint Germain in district 6 and Montmartre in district 18. If you want to stay in these areas, it will cost you though.

The sweet life of Paris

A French acquaintance gave me a good piece of advice before I came to Paris: “Even if you only have 24 hours in Paris, make sure you spend some of them in Marais.” We did, and I will say the same to you. Marais spreads across districts 3 and 4 and is a melting pot of artists, creative minds, gays, orthodox Jews, and students.

Claude Monet’s house in Paris. Stroll up and down Rue des Archives and taste the chocolate in Maison de la Prasline Mazet and walk down the Jewish artery Rue des Rosiers and stand in line outside no. 34 to taste the best falafel in Paris.

Not far from the heart of Marais is Rue Saint Louis en L’ile on a tiny island in the Seine, connected to the mainland by bridges. The street is full of 17th-century houses, delis, art galleries and Paris’ most famous ice cream Berthillon with 33 flavors to choose between.

Just look for the line down the street. Buy some cookies from La Cure Gourmande in no. 55.

In the Bastille, east of Marais, you will find another interesting street: Rue Oberkamp. My favorite shop here was À La Boule Magique in no. 98. We also found two enormous food markets in the Bastille and got ourselves a cheap quality lunch. Try the food market on Boulevard Richard Lenoir between Boulevard Voltaire and Avenue République or the ethnic food market Le Marché de Belleville on Boulevard de Belleville. Even if you do not want to buy anything, it is fun watching the busy life of the market place.

Left for you to taste are still the French macarons, a type of meringue-based confection. We found the best ones in the Latin Quarter, but they have shops all over Paris.

In Rue Bonaparte no. 21 is Ladurée, founded in 1862. They also have a café, where you can sit down. In no. 72 is Pierre Hermé, which was my personal favorite.

If you want to sit down for a meal, Rue de Buci in the Latin Quarter has a great and lively atmosphere. The street is also home to the popular Bar du Marche on the corner, from where you can people watch over a lunch. Paris has 17,500 shops and four department stores and is home to some of the world’s most famous designers.

You will find many of their creations on Champs-Élysées, Avenue George-V, Avenue Montaigne and Boulevard Saint-German. January and July are the months of bargains, where all the shops in Paris have sales with reductions between 20 and 70 percent.

Movies to watch before going to Paris