Volunteering on Horseback in Mozambique

Most people were slightly stunned when I told them I was planning to spend a month volunteering with horses in Vilankulo, a small coastal town in Mozambique. “Mozambique? Really? Horse riding? There?”, was what I heard a lot.

Similar to many African countries Mozambique has had its fair share of upheaval in the past: colonialism, communism, independence in 1975, followed by a 15-year civil war that ended in 1992. Even today it is still one of the countries in the world that ranks lowest in the United Nations Human Development Index.

So I guess to most people Mozambique just seemed like an unlikely travel destination. Add to that the plan to go horseback riding there and people were utterly confused.

But ever since traveling through other countries in Southern Africa in 2006, I have wanted to go to Mozambique. People kept telling me how amazing and beautiful the country is. So when I was planning my travels this time around, Mozambique, as well as a Mozambique Horse Safari, was on the top of my list.

And I was not disappointed. Mozambique is certainly one of the most beautiful countries I have ever visited. Friendly people, amazing food and stunning, completely deserted stretches of coastline – unless you go in the main South African holiday season that is. South Africans have certainly discovered this part of the world as one of their favorite holiday destinations quite some time ago.

The story of how the horses of Mozambique Horse Safari ended up in Vilankulo is one of those stories that made me listen in awe, struck deeply by the courage that some people display throughout their lives.

Amanda and Patrick Retzlaff used to own a farm in Zimbabwe, before becoming victims of the farm lootings in 2001. They then moved around the country, leasing different farms, but often had to pack up and leave within four hours when the land invasions intensified. After their 6th eviction they were eventually forced to leave the country.

Took their 104 Horses with Them

But they didn’t leave alone — they took 104 horses with them that had been given to them by friends and neighbors. The border crossing into Mozambique was only possible because horses were classified as domestic animals and not livestock.

For the past years, Pat and Mandy have tried to establish a horse riding business in the small coastal town of Vilankulo. After leaving Zimbabwe, life might possibly have become a little safer but by no means any easier for them- cyclones, economic downturns in the West-leading to fewer tourists coming to Mozambique as well as losing a large number of horses to illness, disease and poisonous plants are just some of the things they have had to face in the past years.

With a lot of courage and warmth, they still fight on and are a huge inspiration to the people they meet.

But that is not all – they offer an amazing holiday or volunteering experience to anyone who comes to join them to share a small part of their fascinating life.

Our days would begin early to try and beat the heat. Most days we would be on our horses by 6.30 am for an early morning riding lesson.

Then Mandy would cook up one of her amazing breakfasts and after that, we would often take clients out on rides or help Mandy run errands in town.

In true African style, every day would be different and nothing could ever be predicted. One of my fellow volunteers ended up sitting on a sheep in the back of the car one afternoon. He was supposed to try and calm ‘Bazarita’, which Pat and Mandy bought spontaneously by the roadside.

She would later join ‘Baaaaz’, the ram they had acquired at the spur of a moment a few weeks previously. Baaaaz was already living happily amongst the horses, instead of becoming the main course at a wedding reception dinner, as originally intended when Pat and Mandy came across him.

Part of our duties was to look after the clients who come here on horse riding holidays from all over the world. Some are beginners and others are very experienced riders. But everyone always agreed that this was possibly the most amazing beach riding in the world.

At low tide, the beaches stretch as far as the eye can see and they are, apart from a few fishing boats dotted around, completely empty. So the most exhilarating canters are possible here. But Pat was always keen to make sure everyone rides to his or her ability. So he would happily follow at a slower pace with less experienced riders.

In my time in Mozambique, I got the chance to ride up huge, bright red sand dunes, cross rivers in the bush and go swimming with the horses. We also rode to the local fishing village to have lunch with the fishermen and watch the children dance and sing.

Pat and Mandy also keep six horses on Benguerra Island for guests at the amazing Benguerra Lodge. I was lucky enough to go riding on the island twice. I had been convinced that the beaches around Vilankulo were already as white as beaches get, but the beaches on Benguerra proved me wrong.

Followed by an amazing lunch of fresh crab, salad, and fruit we spent the afternoon snorkeling on equally beautiful Magaruque island before returning to the mainland.

One of the most memorable rides was a ride at the full moon. We were riding through the bush and along the beach lit by the bright African moon, only to be greeted by Pat and Mandy’s son Jonathan halfway with a cold beer for a break.

Nothing quite beats watching the moon rise over the beach, before getting back on your horse to ride home for a beautiful dinner under the stars.

My month in Mozambique showed me again how hard life can be in this part of the world. But the beauty of the people I have met and the places I have seen makes one thing true once again: A large part of me will always be in love with Africa. And that is what draws me back again and again.

Flights: To Johannesburg and then on to Vilankulo with Federal Air or LAM Mozambique.

Volunteering: I arranged my stay directly with Mozambique Horse Safaris.

Riding Holidays: can be arranged directly with Mozambique Horse Safaris or through operators such as Wild Frontiers or In the Saddle. 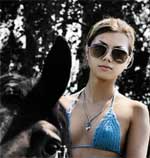 Anne Eubank is a rider and painter. She lives in the UK.