At the foot of the Great Rift Valley, Gorongosa Park is Now Full of Animals

We all get lulled sometimes by our daily routines, errands, and the comforts of home. Travel is a chance to shake things up – to stimulate our brain with new experiences, people, and places.

My older sister, Rory, and I traveled halfway across the world to visit our father in Mozambique in 2011.

Now, to put things in perspective, maybe it would be better to say that we two young women were visiting our ex-Navy Seal Dad who had been living alone for five months in southern Africa in survive-and-save-every-penny mode.

We were not too sure what to expect. It would most certainly not be anything plush, fancy, or, God forbid, girly … but it would shake things up!

Left to our Own Devices

During the week we were mostly left to our own devices, wandering around the capital city of Maputo, seeing the sights, and practicing our Portuguese. Other times we tagged along in the back seat of an old pick-up truck, crisscrossing the vast countryside while my Dad and his co-workers evaluated different agricultural projects.

Weekends were the highlights of our three-week trip there, as we got to stay still for a bit and actually get to know a place. Our second weekend was spent at the foot of the Great Rift Valley at what National Geographic once called “Africa’s Eden”: Gorongosa National Park. It was rugged (as expected due to our host), but beautiful and worth every bush toilet experience and creepy-crawly bug encounter.

This area played an important role in the country’s history. During the war for independence, the revolutionary soldiers often retreated to the mountain peaks, claiming high ground and never once being defeated from there.

In fact, we were told by some of the locals that the word “Gorongosa” comes from the mispronunciation of a Portuguese phrase that basically translates as “that troublesome place”!

So, when the civil war broke out, the RENAMO soldiers counted on Gorongosa’s mountains to be their base of operations and place of refuge.

In her memoir “Drawn from the Plains”, Lynne Tinley describes life with her husband on the Etosha Pan in Namibia and later in Gorongosa, and the great herds of elephants and wildebeests as well as the numerous prides of lions that took advantage of this area’s tremendous ecological diversity and abundance in the late 1970s, before the civil war.

Sadly, much of the game on the reserve was hunted down for meat to feed the rebel armies, and the rest was shot and sold off to those foreign entities willing to sell weapons to the rebels. What few animals were left often died in land mine explosions as this area of the country, in particular, was absolutely riddled with them.

Happily, game numbers and species diversity are on the rise, the minefields have been cleared, and with a great deal of help from the Carr Foundation, Gorongosa National Park and its surrounding communities have a bright future to look forward to.

Gorongosa is about halfway between the port city of Beira and the city of Chimoio to the west (near the border with Zimbabwe).

Either of these two cities is easily accessible with LAM (Mozambique Airways) from Maputo. From there, it is about a two-and-a-half to three-hour drive on the paved road up the Beira Corridor to the turn-off for Gorongosa, where the road turns to gravel.

Transportation by Chapa, a crammed little mini-van that generally serves as public transportation, can be arranged through the park office.

There is also a short runway on the park grounds, so it is worth asking what, if any, flights might be scheduled.

Not only is it the low season, so there are fewer people and better prices, but it is also the dry season. What this means is that there is a bit less brush for the animals to hide behind, making them easier to spot. There are also fewer mosquitoes (and bugs in general), so malaria is less of a concern.

However, there is a good chill in the air at night, so bring multiple layers of clothing to peel off as the day goes on and put back on as the evening comes back around.

Gorongosa’s park headquarters are at Chitengo and include a handful of bungalows, a large open-air, thatch-roof restaurant pavilion (gets a little chilly on winter nights but they light a big bonfire nearby for you to visit afterward with a nightcap), a swimming pool, a gift shop, the activities, and reservations center, employee housing, and a large campground area.

All of Chitengo is fenced in and paths are lit at night, so not to worry. The bungalows are split into two rooms, each with two beds covered by mosquito netting and one bathroom, and a shared screen porch (a great perch to watch the warthogs and baboons that roam the area- they have figured out how to beat the fence, but apparently the lions have not!). If you are feeling rugged, the campgrounds have communal ablutions with warm water.

If you are smarter and more organized than we were, you will make reservations ahead of time as activities inevitably fill up quickly. Luckily, there are a gazillion things to choose from. Among other activities, there are game drives, tours of nearby villages, trips up into the hills for sundowners and hikes up Mount Gorongosa to Murombodzi Falls.

During our stay, we met some national park rangers from the US who had been asked to come over and help figure out where to cut new trails on the mountain.

Since the top of the mountain (which is actually outside the main Gorongosa Park boundaries) has finally been added to the reserve (the original plan set forth by Ken Tinley to the Mozambique government in the 1970s included the entire mountain as it is a vital source of water to the ecosystem below), the hope was to now find ways for tourists to safely hike up the mountain to see the waterfalls.

They could also camp a night or two up there, all while causing a minimal impact to the delicate natural setting. So, I would definitely check to see what progress has been made on that front.

Being that we had just come from such a spectacular game drive experience in South Africa, we decided to focus our Gorongosa activities more on the people and the land itself. Our first morning was spent exploring the nearby Comunidade Vinho with a guide from the park who led us down the 45 minutes of trails to the great Pungue River, which we crossed in a little boat.

If you decide on this activity, be sure to take along some binoculars as the birdlife is spectacular, both along the trails and on the water.

Many of the employees from the park live in Comunidade Vinho with their families, and so the Carr Foundation has funded the building of a small school, a clinic, and a couple of freshwater pumps.

In this little village of huts and thatch roofs, Rory and I had our first encounter with … the Mozambique Bush Toilet.

Little did we know that this little four-by-four cement room with a door and a hole in the floor outside of the local primary school would actually turn out to be quite sophisticated compared to what we would deal with in the days ahead.

I mean, at least it had a door! If you are not into the whole squatting thing, make sure you do what you need to do before you leave your bungalow. But, really, you might as well get used to it since it is what you will be found across most of the countryside.

That evening we decided to partake in the lovely and oh-so-civilized tradition of the “sundowner”. There is a place just outside the park called “Bue Maria” near an old, abandoned Portuguese cotton factory with an unequaled view of the great orange orb laying to rest beyond the sea of green below, past where the silvery glint of the Pungue River meets the straight-edged horizon.

Rory and Dad indulged in some Dos M (the local beer) as we heard the story of the woman (Maria) who used to live up there until she was sucked away by a tornado and tossed into the waters below.

If you happen to get Macadona for a guide (lucky you), be sure to ask him about his experiences with ghosts as a soldier during the war, and later as a guide throughout the park.

My favorite tour was the hike up the mountain to Murombodzi Falls. The mountain is still split between two tribes. One tribe has been more open to the idea of outsiders climbing up and into their sacred space.

The other is still more reluctant and requires that one perform a ceremony with Samatendji (the chief and local medicine man) where one can offer cigarettes, whiskey, and money, among other things. Notwithstanding which side you go up, be aware that no red clothing is allowed on the mountain.

From the base camp at Nhancucu (where we experienced another Bush Toilet, this time with grass walls and no door) we climbed up about 45 minutes of old hunting trails. As we climbed, the view opened up and it finally became apparent that we were indeed at the southern tip of the Great Rift Valley.

The Chimanimani Mountains were off in the distance to our southwest), and between us (on the Gorongosa Mountains) and them there was a great wide valley, scraped clean and flat straight through to the ocean.

After hopping some stones across a stream and climbing around a final bend in the trail, we could finally smell and hear the falls. Climbing up some mossy rocks with colorful birds flitting by overhead, Murombodzi loomed before us.

The icy water thundered down through a lush, green, tropical oasis with the yellow savannah grasses and acacia trees whistling in the wind beyond.

It is a beautiful setting, ideal for a picnic lunch, so take along a backpack with snacks (or get some of the fresh pineapple and honey from the villages on the mountain).

No matter what tours and side-trips you decide on, Gorongosa will not disappoint. It is a lush corner of the mainly dry interior of Mozambique where the wildlife, the land, and the people are making an astonishing comeback. You can actually be a part of that comeback. So go for it!

Votos deboa viagem to you! 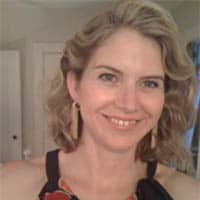 Rebecca Fleming lives in Northeast Texas. I should say, too, that in many ways I do not have the character of an adventurous world traveler. An excessively picky eater since birth, I still don’t eat any seafood; I am not a big fan of bugs and have always had an inexplicable phobia of them crawling into my ears; I’m asthmatic; I get motion sickness when I’m snorkeling, not to mention when I’m in a moving vehicle (I wish I were joking); and, worst of all, I’m chicken! Yet I travel.