Namibia: A Safari on Horseback

Namibia: A Desert Ride from Windhoek to the Atlantic

Some say, once you’ve been to Africa it forever calls you to return. I’ve dodged hippos and crocs along Zimbabwe’s Mana Pools, lingered with the Omo tribes in Ethiopia, bush walked Zambia’s South Luangwa Park.

But for sheer breathtaking animal and birdlife, nothing could top my long-distance horseback safaris in Kenya and Botswana. They were pure Out Of Africa experiences, though unfortunately minus Robert Redford.

Hush in the Bush

I longed to return to somewhere in Africa, once more to feel the hush come over the bush as the sun set in a fiery ball, to inhale that pungent perfume which is smoke from a cooking fire mixed with warm leather and sweating horse, to see a sky so bright with stars I couldn’t sleep.

Perusing my favorite horse tour websites, I discovered the Namib Desert Ride. Starting from a point west of Windhoek, Namibia’s capital, the ride crosses 280 miles of the world’s oldest desert, ending at the Atlantic Ocean. Though supported by a truck supplying food and water we’d take care of the horses ourselves, sleeping under the stars.

“Toughest ride in the world,” the website trumpets, followed by “not for the faint-hearted,” and “an extreme riding challenge.” It seems the organizers are trying to scare people away. If so, this is the ride for me.

A strange and wonderful place

The Namib Desert is a place of so little rainfall that riverbeds may not gush with water for centuries, the only moisture being dense fog which rolls in from Namibia’s 2000-kilometer shoreline with the Atlantic, the Skeleton Coast.

Though the fog has caused many ships to wreck on offshore rocks, it’s a boon to plants, insects, and animals that exist through ingenious survival methods.

As just one example, there’s a small beetle, which, by tilting its abdomen at a 45-degree angle can trap fog droplets and drink what condenses on its body. I’m not so highly evolved, so slaking a raging thirst by gulping fog is going to take practice.

I choose to ride the Namib beginning of September, when days should be hot and nights cold but not bone-chilling. I already have trail riding gear galore, so I needed just a couple of specialty items.

Long days in the saddle produces sweat, which in turn leads to chafing. And chafing, as any baby with diaper rash will tell you, is uncomfortable enough to make you cry. I discovered all kinds of CoolMax undergarments guaranteed to wick moisture away from tight places like…. toes.

We met our horses at a country farm two hours from Windhoek. I was thrilled that our leader was Waldi Fritzsche, who pioneered this desert route twenty years ago. A leggy woman in her fifties, she has a no-nonsense demeanor and is a scarily good rider.

Surveying us with pale blue eyes, she pushed her cropped blond hair under a broad-brimmed bush hat, tied a scarf over her face, and mounted up, waving us onward as if commanding the Charge of the Light Brigade. Her intent was to flush out complainers and those who, in a fit of egotism, have misrepresented their riding ability.

My ride started poorly, with a horse impervious to all stimuli. I worried Colorado horse language didn’t translate into Namibian, but I was loathe to reveal the problem.

Who wants to be a whiner before the adventure even starts? But on a horseback safari, the quality of the horse makes or breaks the trip, so when Waldi offered me her horse, aptly named Sir Do-A-Lot, I was prepared to kiss her boots. If she was riding him, he must be the best.

Water for Drinking Only

The next morning, as the desert waited, Waldi lectured us. “We carry enough water for the horses and for you to drink. So, there is not enough water to also wash your horses. You will have to clean them with the brushes.” Waldi waved a worn curry brush in the air.

“You must pay careful attention. If you don’t brush them clean, your horse will get sores. If that happens we take you off and you finish the trip in the truck!”

Waldi barely paused for breath. “You will check your horse every night. If he has a sore back, I will take him away from you. We have a couple of extra horses with us, but if you use them up, you will ride in the truck with camp staff!” We laughed sheepishly, to confirm that none of us would dare slam down hard on our horse’s back.

The first day was a deceptively easy 15 km ride, meandering through bush savannah and down rubbly slopes. We were traversing the Great Escarpment which separates the Khomas Highland from the Namib Desert 3,600 feet below. The sun was warm. My lips started to chap in the dry air.

At lunch, we clambered to a cave whose smokey black walls spoke of long ago use by Bushmen. The current occupants, betrayed by ample droppings, were baboons, thankfully out foraging when we arrive.

As I daydreamed about the ride ahead, Waldi’s voice broke through. “You must drink water!” she commanded. “At least two liters every day. Dehydration is a big problem. If you get sick,” she continued, and we chorused in unison: “You will finish the trip in the truck!”

There was a set routine for arrival at camp. I led Do-A-Lot in on foot, leaving his tack on racks sticking from the side of our mammoth supply truck. He got to guzzle at the water trough and then searched out a patch of thorn-free ground to roll off the worst of the sweat, after which I tied him to the high line stretched between the supply truck and a thorn tree and brought him a tub of high-calorie grain.

Next came vigorous brushing and checking for backaches. Crossing the Namib in a truck didn’t interest me at all and I was determined to ride Do-A-Lot all the way.

Though tents are offered, I prefered to sleep in the open, bedroll spread on a folding cot to keep me away from scorpions and snakes. In the middle of the night under a moonless blue velvet sky, I woke up shivering, despite the sheep fleece under me and the bedroll and sleeping bag over me.

I yanked on my watch cap, wool scarf, wool turtleneck, heavy wool sweater, vest, and gloves. Plus socks. Bundled like an Eskimo I eventually subsided into sleep. The climate websites were, apparently, only half right.

Waking at dawn, we breakfasted on smoky eggs scrambled with vegetables coming off the ashy campfire. From now on we would cover 50 km a day, under a blazing sun, whipped by ripping, dry winds.

When we stopped for lunch the only shade is from acacias, a low thorny tree that’s been ripping shirts and provided lacy, meager shadow, not enough to cool anyone.

Do-A-Lot’s nimble footwork spared me the thorns, but eventually, he made a mistake, carrying me under a low-lying tree limb–bare of thorns, thank God– which scraped a long, red welt across my back. I forgave him.

A touch of the ocean

Finished with lunch, we drifted toward the horses. “Relax!” Waldi commands. “We will not be leaving until the ocean breeze arrives. Around two o’clock, maybe later.” We eyed each other, amused. The air was hot as a pizza oven.

As for the ocean, it was a hundred miles away. I sat with a damp kerchief over my face, listening to the horses snuffle and stamp at flies. When I felt something deliciously seductive caress my face I whipped the kerchief off and glanced around. Indeed, there was now a breeze, gentle, persistent. And it was cool.

“Saddle up! The breeze is here. Now we will have a nice ride to the camp.” Our start was delayed by a befuddled, but harmless, Namaqua chameleon which thought it should be climbing my horse’s leg. Still, we reached camp with plenty of daylight for a shower before the sun set.

Yes, I said shower. Because in addition to 12,000 liters of water for the horses, 80 bales of hay, one ton of horse grain, a fridge full of veggies, and a freezer storing haunches of zebra and oryx, our truck offered a jerry-rigged shower head. It was enough to rinse my snarled braid, clear the pale desert dust off my face, and refresh me immeasurably.

The desert is ever-changing, one day sandy ground covered in the palest blond grass rippling like a golden sea, the next a steep, shale slope down which we led the horses on foot. We cantered the pebbly Kuiseb River bed, and surprised a small herd of kudu around a bend.

Small oases support springbok, which survive on plants containing as little as 10% water. I clambered up a granite slope to see the sun rise over undulating apricot hills, sprinkled with an occasional silvery shrub.

Wildlife was sparse. Every once in awhile someone pointed to a dot and shouted “Oryx!” or “Ostrich!” I was too near-sighted to tell, which doesn’t bother me.

My game-viewing curiosity has been amply satisfied with other rides. I loved the purity of isolation around me, marveling at any animal’s ability to survive this unforgiving environment, grateful that Do-A-Lot remains strong and steady.

Eventually, the Namib revealed its true, hostile face. For hours, days, we followed narrow game trails through a flat expanse of sand stretching to the horizon, strewn with ankle-twisting black basalt cobbles.

The two spare mounts ran free, stopping at times on a small rise, as if stunned by the harsh terrain left to cover. We rode in silence, the monotone landscape leaving us clueless as to our progress.

One morning we woke to a fog so thick we could barely make out each other’s cots. We rode in jackets that day, a disturbing wind in our faces. There was anxious talk among the staff, to do with evacuating us if a sandstorm blew in.

When the fog lifted and the air stabilized that evening we were all grateful, as much for the ability to ride another day as for the oryx stew and coal-roasted potatoes and squash for dinner. The glass of robust red wine offered was a gay ribbon on this gift of a meal.

And so we made our final night’s camp, on the broad dry bed of the Swakop River. Our last dinner was leftovers: grilled chicken, broccoli with cheese sauce, potato-onion hash, and stewed pears with chocolate for dessert. Talk wa quiet around the campfire, laughter strained as we each contemplated tomorrow’s parting.

The next morning we followed the dry Swakop River river bed, passing homesteads and dirt roads leading to coastal farms. There was canter after canter through dunes shaggy with seagrasses, until we crested a high one and suddenly stopped, faced by roiling breakers slamming onto a broad, sharply sloping beach. Seagulls screeched and wheeled overhead.

Spray lofted skyward, no doubt forming that fog and breeze which we so welcomed over the past week. And though I thought I’d steeled myself for the inevitable, my eyes filled with tears as I stood on the beach, Do-A-Lot at my side. I rode him well and he brought me through safely. 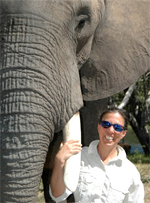 Dina Bennett is a writer and rancher who lives in Walden, Colorado.