Castro is the shabby, colorful capital of Chiloe, two-thirds of the way to the southern tip of Chile. My niece Diana and I took three days to get here by bus from Montevideo in Uruguay.

On the journey we played many games of scrabble, solved dozens of sudokus, read Chatwin and Greene, rolled through pampas, pampas, and more pampas the whole breadth of South America, and crossed the Andes.

Chiloe is a fertile archipelago. The Chilote are an independent island people. They fish and farm, and live in shingled houses. Chiloe boasts an array of wooden churches, many over two hundred years old, which are UNESCO world heritage sites.

Early on our first morning, Diana and I took a bus to the Parque National Chiloe. Anna, a young Russian girl we met at our bed and breakfast, joined us. It was early spring, raining, and cold.

The bus took us twenty-five kilometers south on a smooth tar road, then twenty-five more west, on a pot-holed dirt track lined with dazzling whin and broom. The small bus was full: mostly indigenous Chileans, and five tourists.

After two hours, having dropped off all the locals, we arrived in the bleak, soggy hamlet of Cucao, and stop outside a sign reading “Parador Darwin.”

A chalkboard advertised the day’s menu: goulash, schnitzel, and strudel. Another sign said “Zimmer.” Above it lies a large splayed weather-beaten ragdoll. It felt like we were in Germany!

The driver offered to book us in there for lunch. Our companions headed towards the entrance to the National Park. A sign near an abandoned wooden house said: “Horses for Rent”. We decided to seek out some horses and a guide.

We were directed across a marsh to a small house where Nelson, a handsome, quiet gaucho type, told us he has three horses and needed to borrow a fourth.

“My Horses Know the Rules”

Having negotiated a deal we were invited to wait in his tiny, dark, damp living-room, crammed with knick-knacks and old sofas with crocheted antimacassars. On a wall among several calendars were two framed primary school certificates dated 1968.

After a few minutes, Nelson returned, having failed in his quest.

He quizzed us on our equestrian experience. Diana had ridden a horse seven times in her thirty-four years. I had six lessons as a child and have ridden a couple of old nags in Uruguay. Anna said: “I can ride.”

“My horses know the routes,” he told us. “I lead you on foot to the beach and leave you there. They walk to the end of the beach and then come back home on the inland route. You are quite safe.”

We agreed on a discount since we were one horse short. Nelson gave Diana Chispa, who hardly sparkled like her name. I got Feo, and wondered why this beautiful beast was called “Ugly,” and Anna got a pure white beauty misnamed Moro, who immediately proved to be friskier than the others.

Nelson, accompanied by a stray black Labrador and his mongrel, led us through the deserted village, down a path through whin-covered dunes.

The icy Pacific wind hit us as we get our first glimpse of the ocean. The sky had cleared to cobalt with splashes of foamy white clouds.

Closer to the salty spray, the whine was replaced by low bushes with giant prehistoric-looking leaves. Nelson told us it’s nalca, an edible plant.

We stopped at a gate, and as Nelson was opening it, Moro started trotting back the way we came, Anna tugging at the reins and yelling in Russian. Nelson sprinted after her. My Feo decided to follow. Chispa chomped at the dinosaur grass.

Eventually Nelson managed to regroup us, and opened the gate. “I leave you now.”

Moro was once again champing at the bit, eager to reach the ocean.

So Nelson leapt up onto my saddle, behind me. Feo did a circular tap dance, and I slid off the saddle. Nelson seemed to think it would be improper to touch me.

“Help!” I screamed, and at last he mellowed, hauled me up again, held me in place, and horses, dogs and humans headed towards the ocean.

I felt safe enveloped in the gaucho’s muscular arms.

Nelson slid off Feo, legs it after them, and managed to catch up. Anna was shaken and decided to walk.

The two-kilometer beach was stunning: sparkling with giant cockle and mussel shells, dunes on our right, hills far ahead, white foam, and spray to our left. Oystercatchers stitched the shoreline.

He told us about the indigenous people, the Huilliche. They had lived on the land for generations, but had no title. The Pinochet government created the National Park and expelled them into a corner of the island, but after the dictatorship, the National Park boundaries were moved, and they got some land.

“They live over there,” he said, pointing to the hills beyond the end of the beach. “It’s a day’s walk.”

“Do you people get on with them?” I asked.

“Oh yes. Sometimes there is intermarriage. But remember, they were here before us. This is their land. We respect them.”

Nelson told us about the 1960 tsunami. Although the earthquake which caused it measured 9.5 on the Richter scale and killed two thousand people, Chiloe suffered few casualties, because people were warned and moved to higher land.

One victim was a gold-panner called Abraham Lincoln.

The geography of the coastline was transformed, as Lake Cucao was flooded and joined up with the sea. Farms and fields were washed away and replaced by dunes. Freshwater lakes in the area are now salt lakes.

After an hour on the beach, we headed back towards Cucao through the dunes.

“Well, if you want German food… but I’d recommend Rosa’s place, just across the field from my house.”

It had clouded over. Heavy dreadlocked clouds hung low in the sky, and a cold drizzle was falling. At Nelson’s, we slid off our horses, hugged him good-bye, and trekked across the mud to Rosa’s little wooden shack. It was after two o’clock and we were cold and hungry. 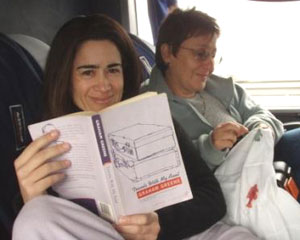 Anna had been singing the praises of the strong, clear local brandy all morning. She was right. Served with a fizzy mixer, it hit the spot.

Rosa offered us seafood empanadas – exquisitely delicate patties. Then there was a cazuela – a deliciously warming casserole of lamb with seaweed. We guzzled down two huge helpings each. Rosa’s bill came to $3.00 each.

The meal warmed us up, and we waited in the rain for the bus, which arrived an hour late. We greeted our traveler friends from the morning.

As we passed the Darwin, under the ragdoll, a blonde, heavily made-up, scantily clad, middle-aged woman waved at us. She didn’t look perturbed about having missed out on our custom.

Blurred by iodine and pisco, we slept soundly all the way back to Castro.

There are frequent buses from Puerto Montt to Castro. The journey includes a twenty-minute ferry ride and takes about three hours.

There are direct flights to Puerto Montt from Santiago with Lanchile.

We stayed at the Hospedaje Corchito in Castro, paying $7.00 per night – breakfast not included. They have a small but comfortable upstairs lounge where guests can hang out and play cards or read.

Paola Fornari is a writer, EFL teacher, teacher trainer, and translator. She was born in Tanzania, and has lived in a dozen countries over three continents. She describes herself as an ‘expatriate sin patria.’ She currently lives in Uruguay.