By Teh Chin Liang

Since 1981, a large swath of the bay has been declared as the Ao Phang Nga National Park.

On a recent trip to Khao Lak, Thailand, I joined a full-day tour of James Bond Island and Panyee island in Phang Nga Bay. Many local tour operators tend to mark up the tour prices. Be sure to bargain and compare prices from other tour sellers to snag the best deal.

Hit the waves and feel the wind in the air

I was picked up by a tour driver in the morning. We drove almost an hour winding along coastal roads and rural villages before coming to a pier in Phang Nga province where all the tour members gathered.

We climbed aboard a long-tail boat. As soon as the engine roared to life, the boatman steered the bow and sailed towards the first stop of the day — James Bond Island.

The boat ride was not as bumpy as I’d expected. The earlier morning shower gave way to glorious sunshine.

We pulled out our phones and started taking photos as the boat sailed past towering limestone karsts rising out of the sea.

Our friendly tour guide briefed us on the itinerary for the day. Under the clear blue sky, we leaned back and relaxed with a cold beverage in our hands. The spectacular vistas of cliffs, caves, and mangroves constantly took our breath away.

The soaring eagles dotted the sky and spread their wings over a fading rainbow, creating a perfect finishing touch to the already beautiful sky. The gusty wind ruffled our hair as the boat picked up speed. We had a “bad hair day”. The air reeked of salt. But who cares? We were on vacation!

When the boat approached the shore, we leaned far out of the boat to get a closer view of the rock that has long stood as an iconic landmark for the island. Tourists are subject to an entry fee of 300 Bhat ($8) which was included in the tour package.

Almost every corner of the island is photo-worthy. The moment I sank my toes into the sand, I felt like I was time-warped into the ’70s and transported to a James Bond movie scene taking place in an exotic beach paradise.

A short trek from the shore where we got off the boat led us to the main beach overlooking the famous rock that once piqued the filmmaker’s interest.

As part of the Ao Phang Nga Marine National Park, the island only opens for a daytime visit and is closely guarded by a troop of park rangers.

The surreal rock formations surrounding the island were awe-inspiring. I climbed into a small sea cave. Through the jagged stalactites fringing the rock walls, I peered out at the emerald water glittering under the blazing sun.

My attention was soon distracted by a giant monitor lizard gliding through the water like a skilled swimmer, leaving a trace of ripples in the still water. The presence of the reptile elicited gasps and murmurs from the curious tourists.

The only thing that I don’t like about the island is the souvenir stalls lining up at the beach area that in my opinion, have somehow spoiled the natural look of the island.

Next in the itinerary was the much-anticipated canoe tour that is designed to support Phang Nga’s ecotourism sector and create job opportunities for the sea gypsies on Koh Panyee – an island 10 minutes away by boat.

I settled on a canoe paddled by a friendly local guide. While gliding through quiet trails of mangrove estuaries, the guide pointed to the roots of a mangrove tree and spoke in excitement, “Walking fish, walking fish!”

I leaned forward for a closer look – a tiny mudskipper, almost invisible, clinging to a root protruding from the water.

The guide’s eyes widened with excitement. He cupped his hand, trying to scoop the fish out of the water.

But as soon as his fingers sliced through the water, the mudskipper leaped away in one swift, alert movement. Careful not to capsize the canoe, I eased over the side, gently dipping my feet into the water.

Listening to the rhythmic splash of the paddle and feeling the buoyancy of the still water was akin to immersing myself in a rejuvenating spa.

A Sumptuous Lunch and Time to Socialize

The boat headed to the scenic Koh Panyee, a floating fishermen’s village tucked amidst the maze of islands.

Koh Panyee is made up of 100% Muslim Java descendants. Towering over a cluster of tin-roofed houses on stilts was a beautiful mosque, with an imposing limestone rock as a backdrop – a scenery straight out of a postcard.

Koh Panyee was our lunch stop. The restaurant was adjacent to a wooden pier where our boat was moored.   We sat around a table filled with a plethora of Thai delights. The Tom Yum (Thai hot and sour soup) was thick and creamy.

The pineapple was perfectly ripe and sweet. The fish tempura was crispy and juicy.  It was a gastronomic feast to remember.

We also took this opportunity to mingle and get to know each other.

Lost (literally) in the Charm of Koh Panyee

After lunch, we had about 45 minutes to freely roam around the island. Everything about the island evokes a sense of the rustic charm of the simple village life. I strolled past a multitude of souvenir stalls and came to a small local school with a soccer field built above the sea.

A group of exuberant local kids was in the field, passing a ball back and forth between their legs. The pure joy on their faces was contagious to the onlookers.

Time flew by without me realizing it, in a blink of an eye, my 45 minutes were up. I hurried back to the restaurant where our boat was waiting. Only then I realized that I had no idea which restaurant I was supposed to return to.

Ahead of me was a stretch of restaurants spanning almost half the coast of the island, with all of them looking almost identical to one another.

To make matters worse, I forgot the name of the restaurant. For a short moment, I felt a surge of panic pulsing through my veins.

Asking for a direction would not have helped much as I was clueless about where I was supposed to be heading to. The only option was to try my luck by searching every restaurant, praying the group was only nearby waiting for my return.

Time ticked away as I continued my futile search through every restaurant. Just when I was about to give up and think of my plan B, I felt a tap on my shoulder. It was my tour guide.

His confused and worried look juxtaposed incongruously with my grin of relief.

While on the boat back to the mainland, everyone’s attention turned to me.

“Where have you been, Chin!? We all thought you’d been abducted by some pretty village girls who wouldn’t let you go!” One of them teased me.

“I asked everyone to vote if we should continue waiting for you or leave without you. And you know what? Everyone unanimously voted to wait for you!” The guide chimed in with deadpan humor.

I laughed until I had tears in my eyes.

“Folks, I appreciate your patience and  backing me up. And, no, I did not get kidnapped by any of the friendly villagers. I was only momentarily captivated by the unsophisticated and simple lifestyle of the village.”

I explained myself, and, no, no pun intended in that statement.

A Buddha cave and cascading waterfall

On the way back to the town of Phang Nga, we stopped at the “Golden Cave Temple Suwan Kuha”.

Upon entering the cave, we were greeted with a 15-meter reclining golden Buddha and several Buddha statues, stupas, and ceramic figures. The dimly lit cave combined with the scent of the incense and the hypnotic chant of the monks emanated a mystical and spiritual atmosphere.

A troop of wild monkeys scurried across the cave wall.  Beware of the monkeys as they could get aggressive when feeling threatened.

Before we ended the tour, we took a quick dip at Ton Pling Waterfall, a 15-minute drive away from Khao Lak. The cooling sensation of the water washed away the weariness of the long drive.

When to Go and what to Wear

The best time to visit Phang Nga Bay is between November and April when days are generally warm and sunny. A T-shirt and shorts with slippers would suffice. Don’t forget to bring a towel and swimsuit if you want to take a dip in the waterfall. You can reach the bay from Phang Nga, Phuket or Krabi. 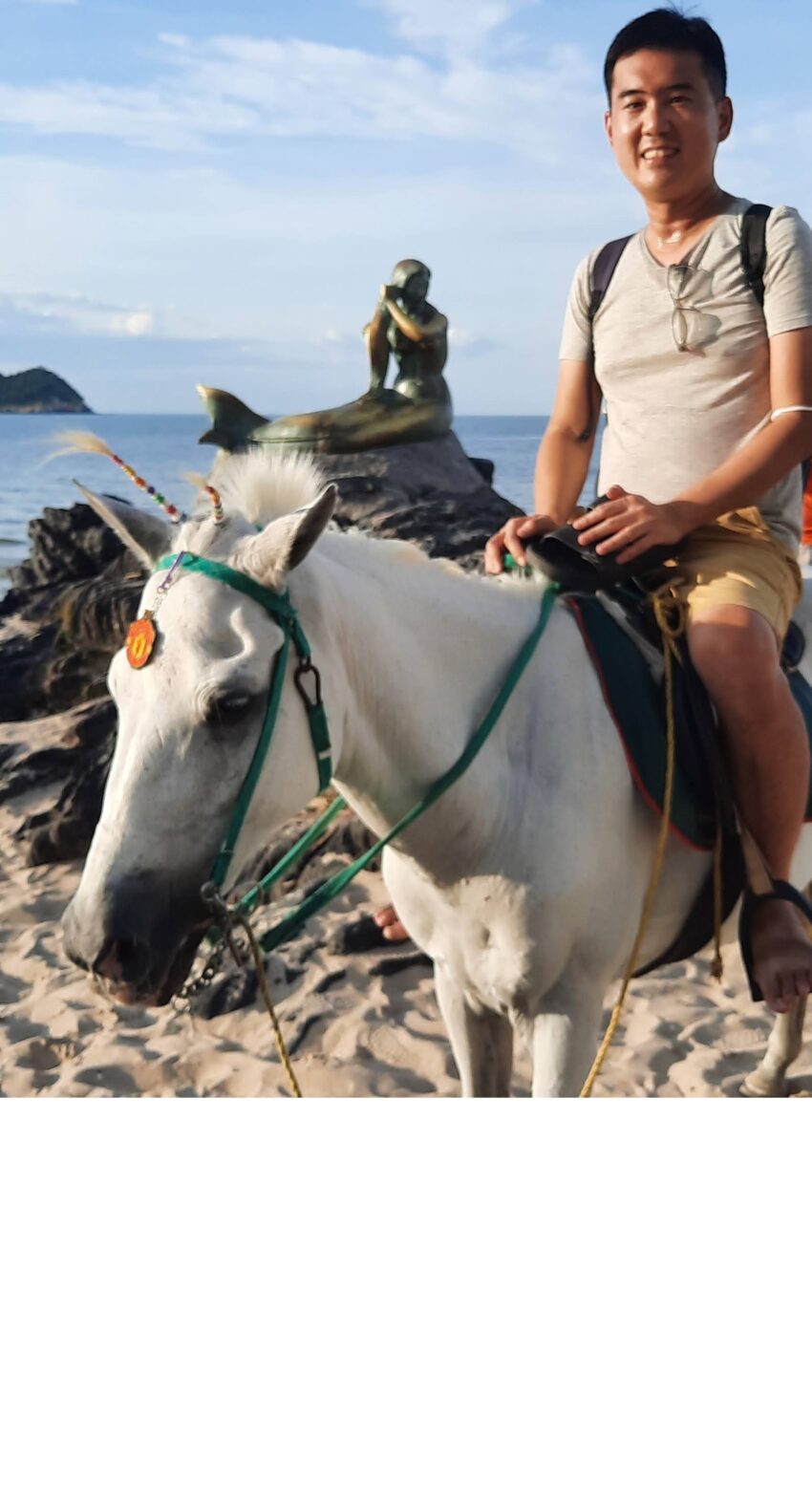 Teh Chin Liang is a long-time travel journal contributor to Dave’s Travel Corner and Global Travel Insider. Besides travel journals, he loves writing prose and poetry. When he is not writing, he enjoys reading and traveling to get inspiration for his writing. He lives in Penang, Malaysia, a scenic island city that is also a UNESCO heritage site.