After a half dozen trips to Thailand it can get boring, except for a single friend of mine who travels yearly for the adventure of serial Thai ladies. For him it seems to never get boring.

But for someone who goes to Thailand every year 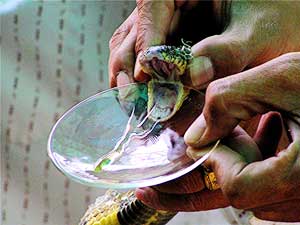 for a combination medical check up, Bangkok’s annual film festival and Asia’s air hub (this year I’m catching the next flight to Kazakhstan), the uniformly saliva-inducing food and happy kind people can become old Thai hat.

This year I found the solution to boredom by walking on the wild Thai side, checking out spitting cobras, huggy boas, curious elephants and cuddly tigers.

I’d become up-close and intimate with Thai elephants before, on several occasions, including a three-day course to become a mahout, a certified elephant trainer that looks super on my resume. Check out the details with a myriad of fab elephant photos.

These super-sized gray barns are playful infants and budding artists on the inside, anxious to pick the odd banana from a pocket and heft a paintbrush to pen a picture of their mahout riding topside.

My fellow students declared it the happiest three days of their obviously sheltered lives though we admittedly looked goofy in bright blue overalls, drenched when our elephants played submarine, dusty when brooming them off in the morning and slightly aghast when washing and straining elephant dung to make fibrous designer papers.

It all culminated in a graduation ceremony for newly minted mahouts, some who may have thought their elephant was actually paying attention to commands in Thai, made unintelligible to any reasonable elephant by heavy accents of English, German and Japanese.

Harboring a fascination with dangerous reptiles I trek yearly to the snake farm run by the Thai Red Cross, maintained to harvest venom for antidotes because Thais are snack food for cobras that infest the jungle, more per capita than sheep to Kiwis in New Zealand.

For less than three bucks, tourists are admitted to an almost terminally exciting reptile show at the corner of Henri Dunant Road and Rama IV Road, a few blocks from the subway and the sky train in the center of old Bangkok.

Herpetologists put an amazing array of snakes through their paces, plucking swimming cobras from the farms’ canals, uncoiling ten-foot (three-meter) long king cobras, milking mambas for venom and generally scaring the up-close audience half to death, which I always love a lot.

Afterwards those with the gumption are invited to model a massive boa constrictor that looks like a giant yellow diamondback, darting tongue seeking the closest ear.

Go and revel like me because it’s cheaper and more exciting than an ear candle.

Of course Thailand is renowned for the gaudiest temples on the planet. Thousands of glittering temples seem to litter every block in every city, portals guarded by giant Ronald McDonalds in spectacular primary colors relieved by strings of embedded mirrors and surrounded by startling gargoyles of pointy demeanor.

After the initial shock during a first visit to old Siam these rapidly become old hat, similar to the cathedrals in Europe.

But a wild Thai, who’s also a professor of art at a Bangkok University, is going the genre one better, building the jazziest temple of them all way up north near the Myanmar border in Chang Rai. This White Temple looks like the Titanic covered with icicles, encircled by moats chock full of koi and surrounded by lesser frosty-looking and garish golden gothic glam.

Naturally I had to make the trip to be dazzled in person. And bedazzled I was, including by the vivid anti-war murals inside the White Temple that included a depiction of bombs raining on twin towers.

The various temples looked like an ice festival extravaganza in a remote locale like Minnesota or the flash-frozen Arctic, raring edifices of chilling whiteness. Perhaps the impetus was a psychological means of escaping Thailand’s pernicious muggy heat.

The White Temple, admission free though small donations are solicited, is being created by a wild Thai indeed, and when finished in a few years will remain Thailand’s new top tourist attraction. Check out this two-minute video.

But for me the top Thai temptress is toying with tigers. The famous tiger temple is off in a remote province seldom frequented by tourists, but tigers can be easily be played with near Chiang Mai at the Tiger Kingdom.

The Kingdom is admittedly commercial, raising tigers for Thai zoos, better than for rich Chinese gourmets. Tourists pay a mere $9 to pet and cuddle baby tigers, playful critters that like to jump all over and smack each other about.

Just don’t pat their heads or teeth will sink into human paws like icicles into hot butter. Otherwise the fab furry ones act like raucous kittens, as indeed they are, fat broad paws already packing a punch as they chase about, seemingly impervious to melting in the Thai heat like the tigers in a black fairy tale.

The big chartreuse eyes flash like beacons,blabbing of sheer roguery and incipient powers soon to detonate. Whiskers twitch as they nip each others’ baby butts, almost playfully.

Adult tigers can be mingled with for the same $9 though the psychological cost and intimidation means few tourists dare.

Newborn tigers may be cuddled in their nursery for $15, wee things that belie the ferocity that will explode in a few short weeks.

And most remarkably the gorgeous tiger coat is always magnificently brilliant, never tacky like the pattern stolen for some women’s apparel. From temples to tigers a plethora of wild Thai beckons.