In Search of Cures on the Côte d’Azur in Menton, France

In 1870, English doctor James Henry Bennett published Winter and Spring on the Shores of the Mediterranean. The book details Bennett’s ‘miraculous’ recovery from tuberculosis – an infection responsible for 25% of European deaths in the 19th century – by convalescing in the Côte d’Azur.

Soon after, a spluttering cloud of British consumptives descended on the region to bask in its supposedly curative climes, forever securing the Riviera as a favored haven for coughing and cough-less Brits alike.

That the sprawling cemeteries that dot the Riviera’s coastline are awash with English names is testament to the limits of Bennett’s prescription, and a cautious reminder that correlation ≠ causation.

And yet, at first sight of the Azure coast, you quickly come to appreciate where Bennett was coming from, as your train slides eastward out of Nice and onto the winding trail that hugs the golden shore, snaking across the remainder of southern France before crossing into Italy beyond.

The train’s wide windows are imperfect, sea salt-stained lenses into cloudless blue skies tangling with an azure ocean, sprinkled with tinkling sunlight and punctuated by the occasional cluster of bobbing bodies and moored mega yachts.

The water is a thin, translucent skin, revealing the contours of corals, rocks and seaweed below.

As the track continues to wind, you’re presented with your first view of the small settlements smattering the coast behind you. It’s an idyllic sight: the sort of scene that – apparently – has the capacity to undercut hard-won medical credentials and the intense rationalism that underpins them. 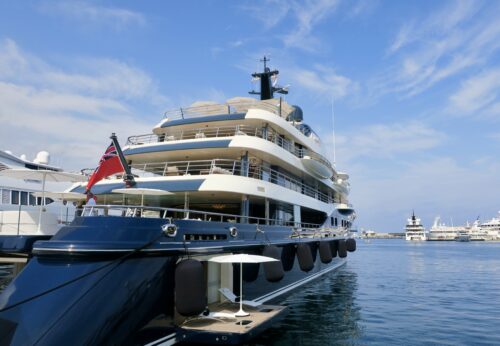 Your pupils rise and fall as they trace the transient outline of the coast. Your mind, lost somewhere between the blues, wanders. An indeterminate amount of time passes – twenty, maybe forty minutes – before your gaze is broken as sea and sky give way to pastel shaded concrete, as the train glides into Menton.

The most easterly of the Riviera’s coastal towns, lying less than 10 miles from the Italian border, Menton’s 30,000 residents inhabit a curious hybrid which is neither wholly French nor Italian.

A quick Google soon reveals why: the border town’s history is markedly multinational, changing hands like currency between the European powers, from the Republic of Genoa and Monaco’s ruling Grimaldi family, to France, with occupations by fascist Italy and Nazi Germany endured along the way.

Nowhere is this peculiar provenance more apparent than Menton’s Old Town, as seen from the heaped rock armour that stretches out into the water from Napoleon Harbor, parallel to the shore. Meters from the beach, a forest of pastel, brown tile-capped buildings rise, wrapped in distinctly Italian yellows and façades, tightly packed as though the Old Town was the only piece of serviceable land in the entire region.

A winding yellow staircase cuts through the old forest, snaking up from the coast towards the 17th century Basilica Saint-Michel, whose baroque bell tower needles the sky high above the rest of the town.

The pastel sea is broken by the grays of the Old Chateaux Cemetery which peers over the very top of the town to the east, where the dead with the best seats in the house watch over revelers on the seafront below.

Menton, like many Riviera towns, is encircled by mountains. While much of Menton is therefore squeezed into the ever scarcer flatter lands along the coast, the town is increasingly spilling into the sheerer slopes of the north, where hulking 19th century villas balance precariously on mountainsides, ensconced within sprawling Mediterranean gardens.

While conducive to the growth of lemons, for which the town is famous, a five-minute stroll northward from the beach sees the region’s otherwise bearable climate become brutalizing, as humid, breezeless air bares down with increasing force with each heaving step up the incline.

Some of the higher-up hotels have gone so far as to bolt rickety elevators into the mountainside to ease the burden for sweaty tourists.

The many (great value) Airbnbs that occupy the large houses dotted across the slopes are not so well-equipped, so it’s worth packing a few extra shirts.

But the view these properties provide of the town below – inspiration for many-a TB-laden 19th century writer – is well worth the exertion.

Between the Beaches in Menton

Between the beaches, bars and botanical gardens, Menton has enough going for it to keep travelers occupied for a short stay.

The place is a haven for those in search of a minimalistic week away – to become one with the beach, top up tans, or bash out a best seller.

For the restless, Menton is a perfect base from which to launch un petit voyage across the Riviera’s innumerable idyl towns and over the Italian border.

Villefranche-Sur-Mer, 30 minutes away by train, is a good place to start.

Great shore-side eateries, warrenous Old Town streets and the incredible landscape provided by the Citadelle Saint-Elm make for a great day out, but, unlike Menton, this comes at the expense of a port deep enough to accommodate cruise liners, meaning the place is that little bit more touristy.

If you’re after something livelier, Monaco is but three train stops away.

Here, a tour of the Prince’s hilltop Palace and extensive collection of classic cars is an interesting way to while away the day, capped with a cocktail at one of the water-side bars, as you bask – in awe or disgust depending on your inclination – at the super yachts jammed like Tetris pieces into the city state’s port.

Travel writers often describe Menton as one of the Côte d’Azur’s ‘best kept secrets’ – pretty accurately, it turns out. Perfectly balancing quintessential Riviera vibes with peace and quiet, it’s the sort of place a cynical traveller would assume no longer exists in a world of cruise liners and Best Westerns.

But rest assured: unlike the many Brits who flocked to the Riviera in search of a medical miracle in the 19th century, Menton’s status as a hidden gem is alive and well.

While you won’t find Dr Bennett’s Winter and Spring on the Shores of the Mediterranean on any med school reading list, take a trip to Menton, and behold the curative power of the Côte d’Azur. 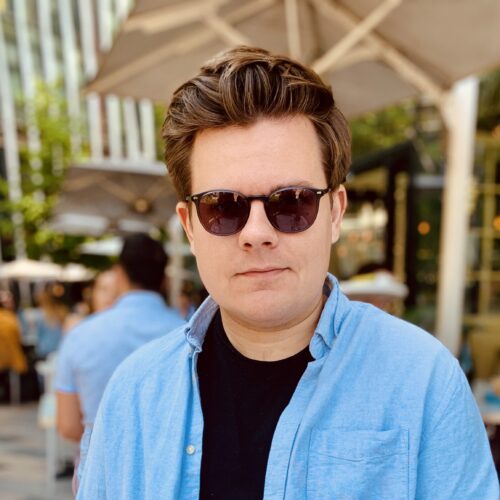 Hugh Thomas is a wandering Welsh writer residing in London, with a long-held passion for travel ignited by an around-the-world trip in 2015 and nurtured by stints working abroad: from Australian zoos to Chinese schools. Combining his loves for literature, humor and history, Hugh enjoys vividly capturing new places, people and experiences in his writing.