A Walking Tour of Whitby, England

It is easy to imagine scenes of terror when you are standing in the midst of graves coated green with moss. You can look past these headstones to the ruins of a 13th-century abbey. And the town below boasts the best fish and chips in England.

On an unexpectedly sunny spring weekend, I traveled with a companion through the Yorkshire Moors to the seaside resort town of Whitby on England’s “Dinosaur Coast” to find horror, history, and more.

We arrived on an early afternoon bus from the city of York and simply crossed the street to the tourist information building.

There, on a rack crammed next to a shelf of carved spoons and biscuit tins that tottered when my backpack brushed against them, we found brochures and booklets that mapped city walks and coastal walks. They promised maritime history, fossils, cream tea, and literary landmarks.

The friendly staff directed us first to the many bed and breakfast hotels perched on Whitby’s West Side Cliff.

You can walk from the bus station, or you can try one of the waiting cabs. The climb is steep, although not long, and we were rewarded for our effort when a harbor of brittle white boats filled the horizon.

If you visit Whitby in the spring as we did, you’ll see only a few children running on the wide, sandy beaches below the nineteenth-century concrete pier and only a few pensioners in their big hats fanning out into the cobbled streets to buy jet jewelry. You are there before the main tourist season begins.

Once you’ve settled in your hotel, you’ll want to venture out again to catch the last hours of light on the water. A 100-year old swing bridge crosses the working port of the River Esk and unites the west and east side of town. You’ll step off of Bridge Street onto Church Street with its wooden signboards and shop fronts that promise everything from books and pottery to ropes of taffy and other seaside confections.

In the nineteenth century, you might have come to this street to buy jet (black) set in silver or gold. Queen Victoria started the trend for jet jewelry while in mourning for her beloved Prince Albert.

Today you still can browse the windows of W. Hamond, the original Whitby jet shop established in 1860 at the north end of Church Street.

Just beyond Hamond’s, you’ll reach the Abbey Stairs. Climb all 199 of them to the graveyard, St. Mary’s Church, and the ruins of the Celtic Abbey.

This abbey has been brooding over Whitby since AD 657 when it was run by the powerful abbess Hild who unified the Celtic and Roman churches. It is part of the dramatic scenery that inspired Bram Stoker’s Dracula.

Fans of Stoker’s gothic novel know that you can find more about England than Transylvania in its pages. That may be because Stoker wrote at least part of it while on holiday in Whitby.

He pictured young Lucy swooning on a stone bench here in St Mary’s churchyard and the pure, pious but clever Mina running through the streets past rows of nestled houses in her luminous nightdress because she was so desperate to save her friend from the predators lurking in the dark.

Of course, she was too late. More than a century before Stoker imagined inescapable horror in Whitby, the earliest-known English poet Caedmon worked here, first as a herdsman then as a monk connected to the abbey.

When you turn your back to Lucy’s churchyard to look out over the harbor, you’ll see the cross memorial dedicated to Caedmon, the “Father of Sacred English Song.”

Return down the steps and turn right onto Henrietta Street’s pastel-colored self-catering cottages. Or take the steep Donkey Road to Caedmon’s Trod and the south end of Church Street.

Here you can enjoy a pint of cask ale with the locals at The Endeavour pub. The name commemorates Captain Cook who set sail from this harbor in a Whitby-built ship, The Endeavour, in 1769 on the first of his South-Sea voyages.

As the Captain Cook Museum will tell you, Whitby has about the same number of people now living in it as in Cook’s day. It has the same narrow streets and the same safe harbor where today a replica of Cook’s ship waits to carry you along North Yorkshire’s Jurassic coastline on “a voyage back in time.” It’s not a bad way to see some of the geology for which Whitby is also famous.

Alternatively, you can take coastal walks to several towns to the north and south of Whitby. Ask tourist information before you begin.

My companion and I tried and failed to find the route south to Robin’s Hood Bay, but we enjoyed wandering along the rocky beach searching for spiral ammonite fossils.

While in Whitby, don’t miss tea and cakes at Botham and Sons on Skinner Street on the West Side Cliff, and try a meal of fish and chips at least once. Skip the shiny Trencher’s restaurant unless you have a big group.

Wait in line at Magpie Cafe on the waterfront, or find the smaller Silver Street fish and chips shop where the frying times are listed daily on a chalkboard by the front door.

There are many restaurants and shops tucked-away like this, so take time to explore beyond the main streets and you’ll feel more like a local.

I confess, however, that I like to enjoy some of the tourist spots or at least indulge in some element of kitsch when I travel. We stopped on our second day to buy Bram Stoker novels at the Whitby Book Shop, and, over a pint of ale, beside the crackling pub fire, I opened Dracula to find wonderful long descriptions of the town and its holiday visitors.

From the Sea to the Moors

The blend of ancient and modern in a town small enough to navigate leisurely in a few hours makes Whitby a perfect vacation choice for a range of travelers. Children will enjoy the interactive museums and the beaches. Older travelers will find plenty of restaurants, shopping, and excursions.

And everyone will want to wander the winding medieval streets, stopping at least once to catch a glimpse of the abbey’s skeleton through one of the narrow alleyways.

We left Whitby on a morning bus. Like locals, we thought, we threw our bags on the rack by the driver, and while we were still scanning for seats, the brakes hissed, the bus jolted forward, and we pulled away from the murky blue water and painted holiday houses of this hauntingly picturesque place.

We soon found ourselves immersed in the brown landscape of the Moors, thinking ahead to the Moor walks we had planned from our next stop, the village of Pickering only about an hour away.

From York: A bus leaves for Pickering, the Yorkshire Moors, and Whitby about every two hours from in front of York train station (Station C).

From Pickering: Take the old steam railway into the Moors for views from the ridges (runs April to October and some weekends in winter).

The West Side Cliff is the best location for walks and for rooms with seaside views. Book ahead April to October.

You’ll get a comfortable room with a private bath and a good breakfast of Whitby kippers and eggs for £30 to £38.

For more lavish accommodations, go to The White Horse and Griffin on Church Street on the East Side.

Walking: Find brochures for city walks at the new Tourist Information building across the street from the bus station.

Take the Old Town walk on the West Side to Captain Cook’s monument and pass the house at #5 East Terrace where author Lewis Carroll stayed, now a tea room and hotel.

At the north end of Church Street, you’ll find the Abbey Stairs, or you can take the steep “Donkey Road” up to St. Mary’s Church, Caedmon’s Cross, and great views over the harbor.

On your way down from the church and abbey, turn right to wander Henrietta Street and look for the small white building where Whitby kippers are smoked daily.

For general information see the Yorkshire Moors and Coast website.

Botham and Sons, 35-39 Skinner Street. Order a cream tea with Yorkshire clotted cream and scones for £4 or a full afternoon tea for about £8. www.botham.co.uk

Silver Street Fish and Chips is down a small side street off of Flowergate on the West Side.Museums
Whitby Abbey. Admission to the Abbey: Adults £5.90, Children £2.90.

The Captain Cook Memorial Museum on Grape Lane (off of Church Street) on the East Side is open daily March through October. Admission: Adult £4.50, Child £3.00. 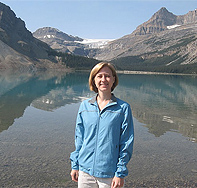 Kimberly Engber writes on literature and science and travels when she isn’t teaching. She lives in Wichita, Kansas.