Wallachian Rocks on the Czech-Slovak Border

Near the Czech-Slovak border between Vsetín and Púchov, several incongruous masses of rock rise like sentinels from the wooded hills.  Skály is right along the road, and convenient for local climbers, but Pulcinske Skaly is more isolated and mysterious. Both are an easy way to get a dose of nature and small-town Czech (or Wallachian) life, way off the tourist track.

Certovy Skály (pronounced chertovy skaly) means “Devil’s rocks.” Various legends surround the rocks, including tales of a brave Wallachian miller who wagered with the devil that he couldn’t change the course of the stream by the cock’s first crow.

The devil took up the challenge and worked all night, but in the morning he had failed. Though he lost the wager, the Devil’s Rocks remain as a testament to his attempt to redirect the water.

Some versions of the legend say that as part of the wager the miller exacted a promise that if the devil lost, he would have to give gold to the region’s poor. Wallachia, in the past, was never a rich region, and devil’s gold certainly would have helped.

The sandstone rock bench of Certovy Skály stretches for 150 meters (492 feet) and rises 25 meters (82 feet) at its tallest. Though not nearly as large as the rock pillars and mazes of Bohemia, Certovy Skaly’s position alone on the hillside gives it an air of authority.

The almost perfectly flat face is unusual, making it look like it was indeed constructed by the devil it’s named after, or by a giant wanting a picket fence for his garden.

The formations reach level 9 on the International Mountaineering and Climbing Federation’s scale of difficulty, and on sunny weekends, you’ll find it crowded with groups of rock-climbing friends and even families: baby in the playpen, Mom scaling the rocks, Dad anchoring. It’s a great insight into the Wallachian mentality: outdoor sports are a serious affair, and the younger you start, the better.

Go early or on a weekday, and you might have the place to yourself. While the front face is good only for real climbers with equipment, follow the trail up behind the rocks and you can have a nice clamber over waterfalls of knobbly roots to the tops of the rocks, where you can take in the views of the lush hilly countryside.

Kids will love it, but exercise caution with the sheer drops. At the top is a picnic table if you’ve packed your lunch. From there, a trail leads about 10 km (6 mi) past smaller rock formations and a fishing lake in a loop to Horní Lide, another quiet Wallachian town, from where you can catch a bus or train.

A shorter but very attractive hike is the Lideko-Pulínské Skály-Zd?chov route. From Lideko, take the blue trail 3 km (1.9 miles) up through the woods along a pretty stream, past a couple of nice picnic tables to Pulínské Skály, another impressive set of rocks.

The largest “rock town” in the region, Pulínské Skály measures 263 meters (863 ft) from the base to the top, and covers 73 hectares (180 acres), spread throughout the forested hills. The area has been settled off and on since the Bronze Age, as evidenced by nearby archaeological findings, and Pulínské Skály would certainly have made for effective natural defense.

You’re not allowed to climb the rock faces here, but the trail crosses a stream and a meadow in front of the large formation called the Petrified Church, then leads up right through the rocks.

You might have to use the handy chains to pull yourself up the steepest parts. It’s a little adventure for the non-rock climbers among us. Views from the top are pastoral. Listen for the sheep baaing across the valley. The trail continues to climb through more rocky areas you can imagine as an ancient castle complex or well-defended village ruins.

Massive and perfectly stacked piles of firewood testify to the length of the winter, and you’ll see chickens and even sheep in some of the yards.

The village follows a tiny stream past quiet houses to the center: one pub, one food shop, a tiny post office/library/volunteer fire department all mashed together, a newly renovated elementary school, and a church on the hill.

It’s the kind of village where kids on the street greet you with a cheery “dobrý den,” all the locals seem to know each other, and if you’re lucky you might be able to strike up a conversation with someone waiting for the bus or strolling down the quiet street. It’s the perfect end to a nice hike.

If you want to camp near Pulcinske Skaly, there’s a basic campground for tents only, just south of the rocks on the red trail. If you prefer biking to hiking, the slightly alternate red trail for cyclists will still take you past the base of the rocks, so you can leave your bikes and make a climbing detour to the top of the sandstone “town.”

Vsetín is probably the best place to stay, especially if you plan to do the Pulcinske Skaly hike or explore more of Wallachia. One of the principal towns in the region, Vsetín has a quiet center, a chateau on the hill, and a nice river walk.

There are several direct trains a day from Prague (4 hours) or Olomouc (1.25 hours). Otherwise, you’ll probably have to switch at P?erov or Hranice na Morav? to the east or Púchov to the west.

At the end of your hike, periodic buses go direct from Zdchov to Vsetín. See www.idos.cz for schedules. There are significantly more buses on weekdays.

Other sites in Wallachia (Valašsko)

While you’re in the region, check out Rožnov pod Radhoštm with its outdoor museum, or skansen, showcasing traditional wood buildings and sometimes demonstrations of village life in the old days. The museum’s seasonal festivals usually include folk music, folk dancing, handicraft demonstrations, and plenty of festival food.

Vartovna lookout tower, reached by a 3-4 km trail from Liptál or Sirákov, on the road between Vsetín and Zlín, offers 360-degree views of the surrounding hills from the new 37-meter viewing tower.

From any town or village in the region you’ll find hiking or mountain biking routes of various lengths, and there are very pleasant flat bike paths along the Vsetínská Beva river from Vsetín to Velké Karlovice and along the Rožnovská Beva from Valašské Meziíí to Rožnov.

Be sure to taste some traditional Wallachian food, especially kyselica, a creamy sauerkraut and sausage soup, and frgal, a pastry baked in the shape of a pizza, filled with blueberry, pear, poppy seed, or sweet cheese (travoh).

The Wallachian Kingdom, as some people call it, is an underrated corner of the Czech Republic, but a rewarding place to explore. If you’re looking for a quiet bit of nature and a peek into Wallachian village life, you won’t go wrong with Zdchov and the rocks of Lideko.

And while you’re on the trail, be sure to say “dobrý den” to the other hikers and cyclists. The traditional “good day” is a sign of friendly respect, a nod to fellow outdoorsmen, and a way to connect, just for a moment, with the people who love Wallachia. 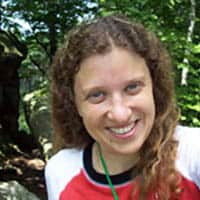 Melinda Brasher has taught English in Poland, Mexico, the US, and the Czech Republic, and travels every chance she gets, trying to pick up words in the local language and usually ending up speaking something like Pol-Czech-Deutsch or Franglish.