After twenty years I returned to Sierra Leone to keep a promise I had made. My son Noah and I spent a month in Kabala, Sierra Leone, West Africa.

As we headed home, Noah looked out the airplane window at our last glimpse of the African coast. I got that tight feeling in my chest and hold back the tears. I tell Noah, you can leave Africa but it will never leave you.

We are home; My son Noah is optimistic as he reunites with his buddies, telling tales, looking forward.I am looking back, yearning for Merah’s cassava leaf and wanting to return to my friend, Peacemaker and his evening palm wine to drown my sorrows of this crazy, unfair world we live in.

I struggle with the ironies and the mystery of the human condition here. Since becoming a mother I feel the bonds of birth, death, hope, and fear so much deeper.

I’ll never forget looking at Noah when he was a few hours old and having the preciousness and futility of life dawning on me in a way it never had before, even in my two years in Sierra Leone.

Well, it all came back to me, this deep love, in elemental Africa; earth, air, fire and water, The diesel filled air is dissipated by the Harmattan winds as they sweep off the Sahara dessert stirring up the red dirt from the dry season mixing with the smoke from the cooking fires and the burning of the uplands being prepared for next years rice crop.

This red earth coats every orifice of my body. I find it in my ears, my nose — it cakes in my throat. I have never understood the meaning of the word ‘parched’ until now. I have no patience to wait for the well and iodine tablets or bottled water. I suck ginger beer from a plastic bag.

Like the wind, the smells stir up memories of Sierra Leone. I smell the difference between water from the well and the waterside, and thus began my continual utterance of “only if” in this beautiful and tragic country.

Only if everyone had access to clean water, only if people would go to the clinic before their wounds got so infected that amputation was the only choice, only if men would use condoms, only if children could get an education and didn’t have to go to war, only if petrol were not so expensive that the villagers were unable to get their goods to market.

We are fragile bodies, and yet the spirit of hope is apparent in these open faces that don’t show fear in their eyes that 12 years of war has left in their hearts.

Here it is truly every man for himself, yet one can’t ignore the individual stories. Every single person has a story since the war; and most are are a mixture of despondency and hope. It is this blend of fatalism and optimism that is the irony of living and working in Africa.

It’s a grueling five hours on bad roads; people line the streets every fifty miles or so setting up roadblocks to pay for their crazy New Year parties.

Drunken people, cows, goats, and children are in the streets. Mohammed is an excellent driver, but it’s dark and he’s tired from climbing the hill.

We run over at least two chickens and pass many swerving vehicles piled high with people, petrol cans, and luggage. I cringe in the back seat pushed into Kankos’ injured leg with every jerk of the vehicle.

She sits perfectly still, yet clearly not enjoying her first ride in a motorcar and her first trip out of her village. We stop for petrol in Makeni and I buy everyone ice cream for 30 cents each. Kanko eats hers with apprehension and a kind of foreboding acceptance. She has been uncommunicative and her Auntie shows no compassion, only berating her for not being more appreciative.

Everyone just stares out of the window for the last few hours of the trip. Each lost in our own thoughts as the darkness descends and the hum of generators begins.

With no electricity outside of Freetown, this is a dark countryside. I hold back tears once again as I watch shadows dance across Kanko’s face not knowing how to get through her serene veil and wondering whether we are doing the right thing.

How will this journey end?

We reach the hospital at 10 pm.

Back home now, it is difficult for me to maintain my naive optimism. I turn on the car radio on my way to Whole Foods and hear about the Kikuyu in Kenya. I hear that Charles Taylor’s’ trial for war crimes in the World Court will take at least two years! Can there ever be justice for this war?

I read a letter from a West County [Massachusetts] boy who was killed in Baghdad recently; I listen to stories from students who return from rebuilding a still devasted New Orleans.

I walk into Whole Foods and break into tears when I see cherries for $12.99 a pound. I instantly convert this to 40,000 Leones, which would buy enough rice for a family of 14 for weeks. I wonder who picked those cherries and how much were they paid and how were they transported?

Can we ever truly affect change? Would a truckload of money and supplies have saved Kanko and for what? Would someone marry her without a leg?

Would she get an education and raise her children differently? Would she not send her boys to war and her girls into the bush for initiation and female circumcision?

Would she keep nursing her baby with diarrhea and find the money to take her to the clinic even if it were a baby girl?

Would she boil water from the well and make a rehydration solution? Would she pay for her vaccinations? Would she fight for change and stand up against injustices of her fellow humans?

“I de try small, small.” I have made some good connections to Sierra Leoneans who are making a difference. A friend said to me, we cannot control outcomes but we can have good intentions.

For now, I am content to appreciate this moment, marvel at the clean hot water that comes out of my faucet as I scrub the breakfast dishes, snuggle Josh, and our precious children.

I walk around in a daze; amazed at the choices we have in our lives. I write a needs assessment for the clinic, knowing the need is endless and most likely will never be met. I call Topher and Dorcas and think of ways to raise more money.

Most of all I try to keep my heart warm enough to live consciously and continue the uphill battle knowing I will never reach the top but I will keep my eyes open even in the glaring, blistering sun to look for clearer skies. 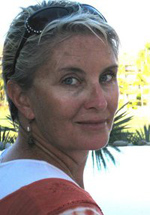 Marina Goldman is a former Nurse Practitioner and lives in Western Massachusetts with her family. Noah Goldman is a student a Greenfield Community College studying life. They plan on returning to Kabala annually. Read her blog, Going to Sierra Leone.