Inis Mor: As Irish As It Gets

Green meadows, rocky cliffs that disappear in blue waves, thatched houses, and prehistoric forts. Horses, cows and sheep. Folk music, Guinness, and woolen sweaters. The Aran Islands off the west coast of Ireland are a stronghold of Irish culture, language and desolate landscapes.

My eyes are scanning the horizon across Galway Bay. The wind is howling and it rains a little – as it so often does in Ireland. The small ferry from Ros a’ Mhíl on the mainland to Inis Mór is rocking from side to side. I do not have sea legs, so I have sought out the fresh air on the top deck. Rufus, a mixed-breed dog, is keeping me company on his way home.

Inis Mór is, with its 12 square miles, the largest of the three Aran Islands, which also include Inis Méain and Inis Oírr. Despite its isolated location off the west coast of Ireland, there is daily ferry service from Galway. A nonstop coach service is available from Dublin airport to Galway.

Once Inis Mór was nothing but a deserted rock on the edge of the Atlantic. Today it has about 800 inhabitants, some horses, cows and sheep. The passengers on board the ferry are a mix of tourists and islanders on their way home. I have already overheard several conversations in the Celtic language Gaelic, which is the first language of the Aran Islands.

The ferry docks in Cill Rónáin, the largest village on Inis Mór. The tide is out, so in the innermost part of the harbor is a ship almost beached in the sand. Onshore, only a few minutes’ walk from the pier, Kilronan Hostel is located in a pastel green building, the bike rental in a purple, Bayview Restaurant in a beige, Aran Sweater Market in a gray and the souvenir shop in a pink building. Together they are a color palette around the pier.

Fishing and tourism are the largest industries on the island. It is not possible to bring or rent a car on Inis Mór. Thus the locals have lined up minivans on the pier offering guided tours to newly-arrived visitors. The best way to explore the island, however, is by bike, horse carriage or on foot.

The air is fresh, it is relatively quiet and the sun shines from a clear sky. Weather conditions on the Aran Islands are unpredictable.

One minute it rains, the next it snows and hails, and the third minute the sun shines. You may experience all kinds of weather several times a day. The barren heaths and bogs provide little shelter, so you can almost always be sure of wind.

Áilte a chur roimh Inis Mór!” A middle-aged man wearing overalls, boots and a woolen sweater laughs and knows perfectly well that we do not understand a word of what he has just said. “Welcome to Inis Mór,” he repeats as he gives us a hand on the gangway.

No Luxury Hotels on Inis Mór

My friends and I check into Kilronan Hostel. There are no luxury hotels on the island, only bed and breakfasts and hostels. We have lunch at the Bayview Restaurant, which offers great food, but terrible service. Be prepared to wait. Everything on Inis Mór takes a little longer than in other places, and the locals do not seem to worry much about the concept of time. Maybe that is why it has almost stood still.

During lunch, it begins to rain again, so we decide it is time to rearm our wardrobe. We head for Aran Sweater Market across the road, where we purchase an Irish armor of woolen sweaters, hats, socks, and mittens. The wool is unfortunately not from the Aran Islands, where there are very few sheep, but the patterns that the wool is woven in, are unique to the islands.

With a thick layer of wool under our coats, we feel ready for a hike to Dún Dúchathair, the remains of a black fort on the southwestern part of the island. The walk takes less than two hours back and forth.

Everywhere we see the characteristic low stone walls which protect the tissue-thin layer of soil from blowing away. We also meet a couple of horses and cows who look at us as if they have never seen humans before. Everything is peaceful and tranquil. 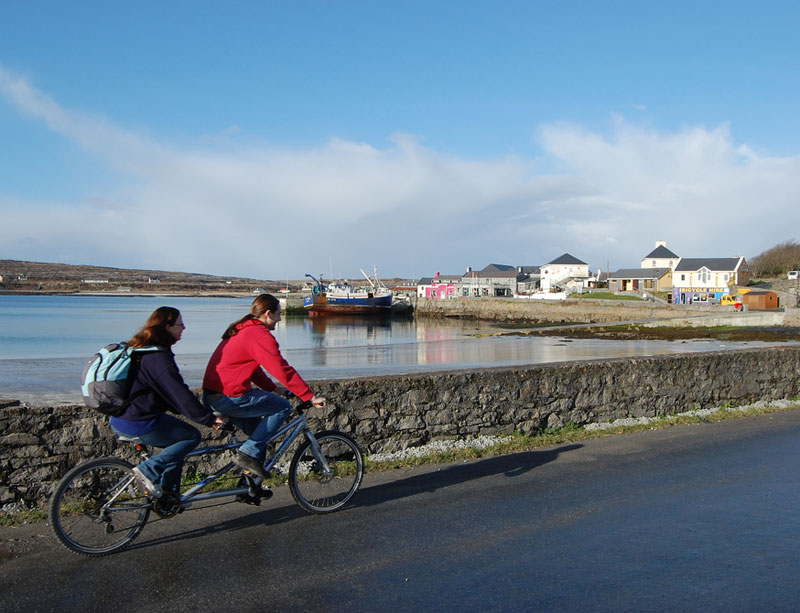 The easiest way to get around the island is by bike.

I run to the edge of the cliffs, while my terrified friends gasp. I lay myself down carefully on my stomach and stare directly down into the roaring Atlantic waves hundreds of feet below me. This is the Ireland, I know from movies and pictures: windswept green meadows and rocky limestone landscapes which end abruptly, and the cliffs meet the ravaging sea.

Back in Cill Rónáin we eat dinner and hit the sack early. We have a long bike ride ahead of us the following day. The sun has set, and from my bed, I can see the Big Dipper through the ceiling window. The last thing I think, before I fall asleep, is “What a luxury!”

The next morning we rent a tandem bike and a regular bike and head up along the east coast. We pass a seal colony before reaching Cill Mhuirbhigh, a village that boasts one of the island’s best sandy Blue Flag beaches.

It is still too early in the season to swim, so we cross the island to Dún Aonghasa on the west coast. The ruins of the prehistoric fort is the number one attraction on Inis Mór, and rightly so. 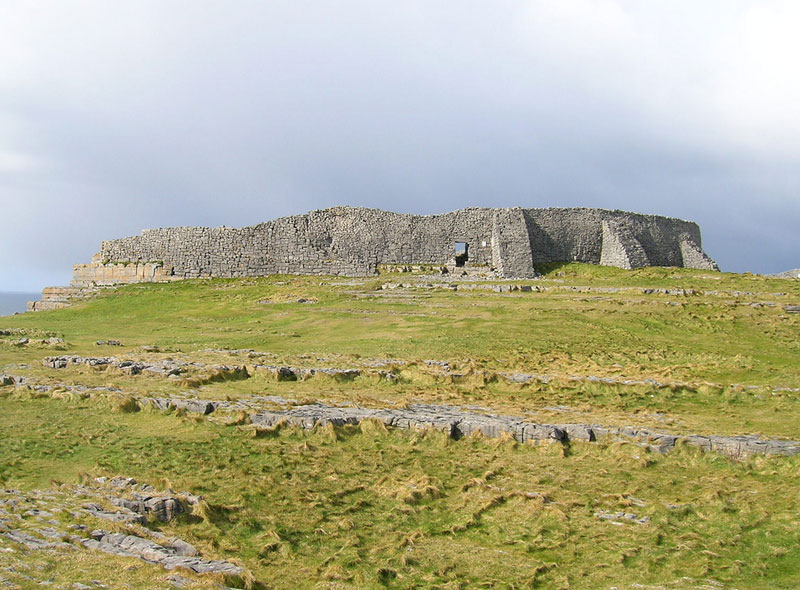 The fort at Dún Aonghasa on Inis Mór in Ireland.

Dún Aonghasa has a geological museum, souvenir shops and cafes. We decide to eat lunch there before we continue to Na Seacht dTeampaill, the seven churches, further north.

If you have once seen an Irish cemetery, this is not much different, but the route is charming with picture-perfect thatched houses next to modern houses.

On the way back we stop at the island’s lighthouse and highest point overlooking the other Aran Islands and Connemara Mountains on the mainland.

Back in Cill Rónáin we eat dinner and spend the last night at Ti Joe Mac’s Pub, where the national drink, Guinness, is flowing from the taps, and the band is playing Whiskey in the Jar as well as other, less well-known, Irish songs.

Aran Islands are a stronghold of Irish culture and music. So you can enjoy live Irish music at virtually every pub in the village. The two most popular pubs are probably Ti Joe Watty’s and Tigh Fitz. Despite the name, American Bar is also a good place for listening to Irish music.

Getting to Inis Mór

Aran Island Ferries sails between Ros a’ Mhíl and Inis Mór. You can purchase a ticket which includes coach transfer between Galway and the port of Ros a’ Mhíl. The journey takes an hour and a half from Galway to Inis Mór and costs €32 return.

Aranislands.com offers tourist information about the Aran Islands. Combine your vacation with a stay in Galway or Dublin.