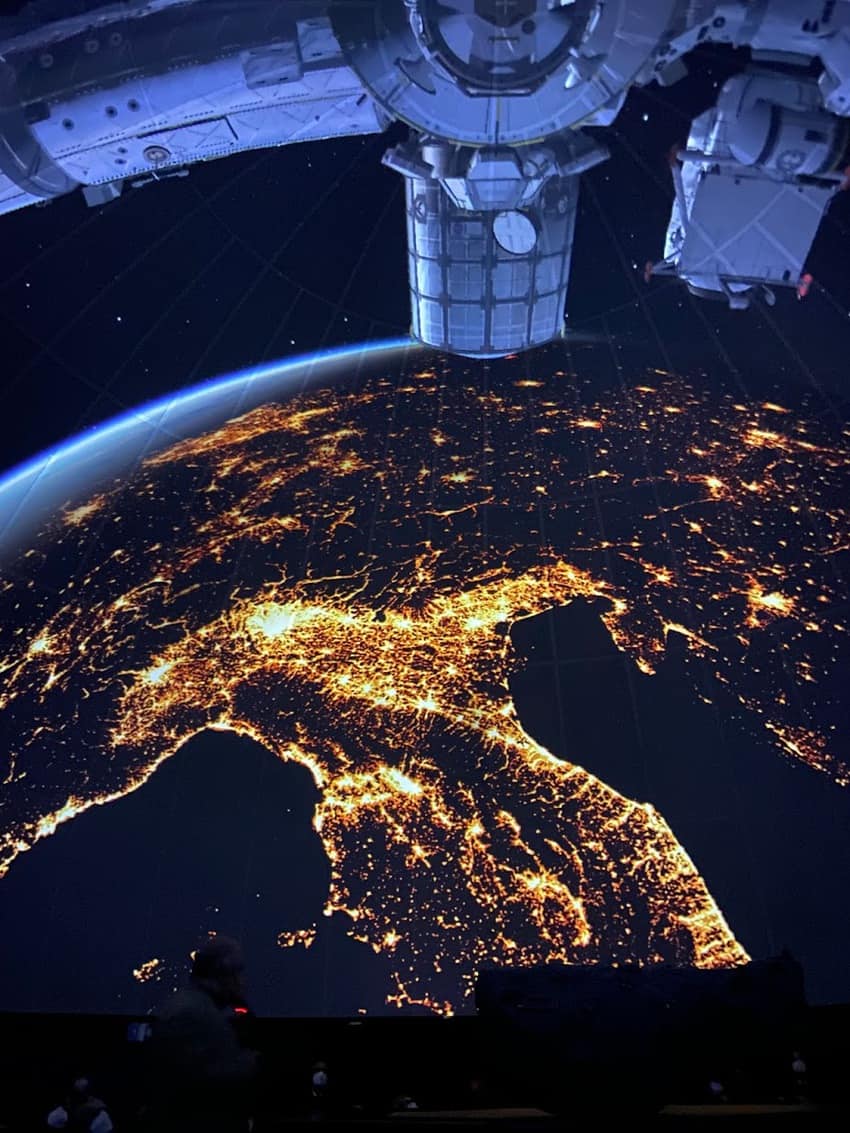 The city known for its ancient history now wants to be known for futuristic technology.

Rome recently opened two sites that take visitors into worlds that will make their heads spin and their eyes pop.

One brings people up close and personal to the growing threat of machines, and the other brings them closer to other worlds entirely: space.

The first is called Synesthesia. While it sounds like something you’d inhale before an operation, it’s actually a giant white orb. The second site is the reopening of Rome’s planetarium after eight years of restoration.

It now features a beautiful hour-long show that illuminates the stars and planets above as well as famous Rome sites below.

The two sites are related. The city’s aim is to focus on technology to broaden its horizon and look at the environment and community with fresh, learned eyes.

Here’s a look at the two sites:

Standing about 8 x 8 x 8 feet with a patchwork surface kind of like a giant irregular beach ball, this orb has circular holes allowing people to look inside.

What they see outside is their eye projected onto the wall. The idea is that while we are looking into a machine, the machine is also looking at us.

The growing threat of Google, Instagram, and other social media creeping more and more into our private lives is part of the inspiration.

The brains behind the orb are Severino Alfonso and Loukia Tsafoulia, two architects and architectural professors at Philadelphia’s Thomas Jefferson University.

Their press release says the Synesthesia evokes “a sense of a place that brings together sight, sensation, movement, touch, memory and perception.”

During a press conference revealing the site, which is open to the public until May 22, Tsafoulia talked about the environment and the impact of mental and physical health, about perception and interaction.

It’s all conceived through the orb which, the release says, is “a central nucleus of multiple projections with a shapeless structure.”

It invites the viewer to engage in what they call a “sensory conversation.”

Ironically, the site is in the Imperial Forum Museum in Trajan’s Market. About 2,000 years ago, this was one of the busiest markets in the Roman Forum.

It was a huge complex filled with shops, apartments and offices and today is billed as “the world’s oldest shopping mall.”

It’s believed it served as the headquarters for Emperor Trajan when he reigned from 98-117 A.D.

So in the same building that’s filled with artifacts from 2,000 years ago is also an 8-foot-high orb warning you about the evils of Google.

The orb is behind a series of curtains in the entranceway of the museum. It’s where Alfonso and Tsafoulia held court for reporters and city officials curious about what a giant white ball has to do with the threat of technology.

Alfonso, a Spaniard with a long list of architectural degrees and international professorial jobs, was asked what effect the orb could have on mankind.

“It’s awareness,” Alfonso said. “Understand our relationship with machines. At first, you might think it’s not so important but as you start evolving with the issue you realize that machines are omnipresent in our daily lives all the time.

In understanding our relationship with machines, we have a meaningful conversation to see how we can improve that relationship.”

It sounds confusing but he broke it down in real-life terms.

“When you go buy a ticket, you buy it from a machine,” he said. “When you enter a store, you’re recorded and then the recording is used.

When you enter your home there are devices that may not be present but might be in the future.”

So should we be scared? Not entirely.

“There are multiple layers of benefits and problems,” he said. “Benefits are their part of the reason we are progressing.

But there are also layers of problems. Issues of privacy have to be dealt with.”

The price for non-Rome residents is 13 euros and includes entrance to the museum.

Planetario: Return to the Stars

Billed as “Planetario: Return to the Stars” the planetarium is in the same building in l’EUR, Benito Mussolini’s ill-fated fascist neighborhood on the south end of Rome.

Germany donated it as payback for the damage done to Italy during World War I. Mussolini inaugurated the telescope in 1928.

The planetarium has been spruced up and the theater refitted with 98 plush seats the rock way back to get a good view of the 3,300-square-foot screen that covers the entire round roof. It stretches 46 feet in diameter.

The new technology includes Sky Explorer software with 4K resolution that allows them to reconstruct every aspect of the universe onto the dome’s screen.

“The system allows us to move in space and time,” Planetario astronomer Gabriele Catanzaro told reporters during the grand reopening.

“We use this machine to tell the universe in our way, combining archeology and scientific research.”

The show starts with aerial views of famous sites in Rome such as Circus Maximus and the Roman Forum. It shows a sky full of stars twinkling over the Rome skyline.

It then goes into space with remarkable up-close photographs of planets and the galaxy including the Big and Little Dippers and Saturn with its rings.

You’ll feel like you’re in a space station when you see Italy from space.

It’s a night shot and the lights paint the long peninsula in a soft yellow glow with the brightest spotlight coming from Rome near the center. A space station hovers over all of it.

The photography then goes into Centro Storico and into the Pantheon,

Rome’s 2,000-year-old temple turned church, famous for the round hole in the roof.

Looking up from the floor, the Pantheon’s roof looks like the eye of a telescope.

The Planetario is a permanent fixture and tickets are 9.50 euros for non-Rome residents.

However, reserve early. In the first 48 hours of its opening, it received 2,700 reservations.