England: London Pass for Attractions Not So Common

Places You Will Enjoy Visiting: The one-day London Pass gives admission at many of the city’s Best Attractions

By Arjun, Nirmala and N.R.Venkatesh

London is a vibrant multicultural city throbbing with action, energy, and hope. It ranks with Paris and New York as one of the top tourist destinations in the world.

Besides this, it is arguably the financial capital of Europe, the economic engine of Britain.

We recently returned from a delightful holiday there combining downtime with recharging our batteries. We had booked an Air Canada vacation package that covered our round trip flights from Toronto and a double room at the IBIS Hotel in West Brompton, a small neighborhood in London’s West End.

Though the room at the hotel was just passable, the complimentary hot buffet breakfast was sumptuous. London is less crowded and less expensive in early November and we lucked out with the proverbial damp and dreary British weather.

Thanks to serious planning, we made full use of the city’s impressive and user-friendly public transit. The tube and bus routes are clearly laid out in color-coded maps that also identify the city’s gazillion tourist attractions, facilitating smart trip planning and effortless sightseeing.

We’d highly recommend investing in an all-zone Travel Card or an Oyster Pass, which saves you money and time (by avoiding long queues at the ticket vending machines). You can use either card from the moment you arrive at Heathrow Airport.

Our planning also enabled us to snag discounted tickets through ‘lastminute.com’ for ‘Lord of the Dance – Dangerous Games’, a world-class Irish musical and dance production.

You would do well to check out the website before you travel for a variety of great deals be it for theatre tickets, city breaks or, surprise, surprise, for British afternoon tea.

Our planning also enabled us to purchase a one-day London Pass that covered the cost of visiting Shakespeare’s Globe Theatre, a cruise on River Thames, a visit to Charles Dicken’s house and a hop-on-hop-off bus tour of the city.

The first full day of our visit, we rode buses 11, 74 and 15, end-to-end. These buses cover many of London’s top tourist destinations. The rides enabled us to get our bearings and fine- tune our itinerary. The same day, we checked out the Tesco and Sainsbury’s grocery chains and Tesco was the hands-down winner both in choice and price.

We stocked up on a selection of British beers (Hobgoblin, Theakston’s Old Peculier and Fuller’s London Pride), after the shop assistant at Tesco quipped that, these days, one needed to take out a mortgage to enjoy a pint at a local pub, what with a pint setting you back about four quid. Most mornings, as we set out, we loaded up on Tesco’s ready-to-eat offerings for snacking on the go.

London is a large city and exploring it involves walking fair distances, so a pair of comfortable walking shoes is highly recommended. We managed to visit many of London’s top tourist destinations (covered in most tourist guides, so we’ll skip it here).

Given the number of tourists flocking to London all-year-round, it is no surprise that it is a haven for pickpockets. At both the British Museum and whilst we watched the Changing of the Guard outside Buckingham Palace, museum staff and the police, respectively, loudly and repeatedly asked tourists to beware of pickpockets and to guard their possessions.

On average, we walked six to seven miles a day and this enabled us to sample London’s culinary offerings without dietary guilt.

A smart way to get an insider perspective of a city is by visiting its markets. We visited the top markets in London starting with Borough’s Market, a foodie’s delight in the city’s east end. The adventurous of the palate can not only savor regular fare but also game meat including ostrich, crocodile and zebra ‘kebabs’. Brick Lane Market, also in London’s east end, gets transformed weekends into a chain of open-air markets selling all manner of things. Two standout stores included Beigel Bake and Dark Sugars.

The former is a 24-hour bakery famous for traditional Jewish-style filled bagels. Our favorite was Dark Sugars – Chocolates, a pair of fast-growing artisanal chocolate shops where you can buy exotic dark chocolates with myriad mind-blowing flavors including dark chocolate infused with tobacco. We also managed to visit Spitalfields Market, Camden Market and Portobello Market.

One London neighborhood that stood out was Brick Lane in the city’s east end (Shoreditch), also referred to as Little Bangladesh. It is reportedly home to half of the 200,000 Bangladeshis living in London.

The place is a warren of cramped streets with two and three-story residential apartment buildings with ‘off license’ or convenience stores, cheek-by-jowl with each other.

The place also has a number of ethnic Bangladeshi eateries. We could not help but notice that a number of the residents, including Bangladeshi youngsters, be they male or female, wore conservative ethnic attire.

Another stand-out moment was when we entered the British Museum. The British staffer who admitted us into the museum correctly guessed our Indian heritage and evinced his keen interest in India. He then went a step further, unraveled the top button of his shirt and pulled out a gold chain containing a locket of Ganesha, the Hindu elephant-God.

We chatted for a few minutes and we were impressed with our British friend’s knowledge of Hinduism and Hindu scriptures. We exchanged emails and we’ve since corresponded by email. Our British friend is a poet and he has shared some of his poems with us.

As booklovers, our visit to London could not have been complete without visiting Stanfords, Skoob and Judd bookstores. Stanfords in Covent Garden established 1853, is arguably the world’s biggest travel bookstore and it did not disappoint.

Skoob Books in Marchmont Street, albeit cramped and dusty, is a used bookstore carrying over 50,000 books where you may find titles you never imagined existed.

Judd Bookstore, also on Marchmont Street, though labeled a used bookstore, sells new ‘remainder’ books at discounted prices and they too carry over 50,000 titles. Not only is their collection impressive but, importantly, their organization and layout enables easy location of books and it is well worth a look-see.

We enjoyed a memorable sit-down meal at the highly-acclaimed Wolesley Restaurant on Piccadilly (next to the Ritz), ‘a café restaurant in the grand European tradition that combines London heritage and Viennese grandeur’.

We made it a point to enjoy a pint at the fabled ‘Ye Olde Cocke Tavern’ (22 Fleet Street).

The pub dates back to the 17th century and its clientele included such luminaries as Samuel Pepys, Alfred Tennyson and, yes, Charles Dickens. We also visited the Punch Tavern on 99 Fleet Street whose dark oak panels also reek with literary history.

This is the place where the staff of Punch, the satirical magazine began to meet after the magazine’s creation in 1841. You will find several other centuries’ old pubs on Fleet Street.

A stroll along Oxford Street, Trafalgar Square, Piccadilly Circus and Soho is de riguer on any trip to London and we witnessed London getting ready for Christmas. The walk through Soho also offered us glimpses of its gentrification.

The guide on our hop-on, hop-off bus tour remarked that Piccadilly Circus has the highest density of tourist traffic in the world and the crush of tourists seemed to bear it out.

Having lived and worked in the Middle East (Bahrain) for almost two decades, we had to pay homage to the Arabic eat

eries on Edgware Road. As Andrew Gimson of The Spectator put it “Londoners have no need to travel to Baghdad, Cairo, Damascus or some other city of the Middle East in order to experience the sensation of being in the Arab world. A visit to the southernmost stretch of the Edgware Road is quite sufficient.”

The chicken shawarma at Café Helen, a nondescript yet highly-rated eatery, was outstanding. We also managed to savour ‘ghoozi’ (grilled lamb stuffed with rice, boiled eggs, onions and spices), after two decades, at Al Arez restaurant. The ultimate bonus was picking up a box of instant Arabic ‘gahwa’ (coffee) with cardamom – labeled Coffee Hala.

We were a bit disappointed, though, at not encountering any Roma (gypsies, mainly from Eastern Europe) on Edgware Road. We had watched videos of how they artfully donned Muslim attire, to appeal to the charitable instincts of visiting Arabs, as they thrust their outstretched arms seeking alms.

Our curiosity was, of course, piqued by the knowledge that gypsies around the world originally hail from our own home country, India. The gypsies continue to suffer pitiless discrimination, public and governmental, in a number of European countries, except perhaps, to some extent, in Spain.

London is a must-see city, with its historic pedigree, irresistible charm, and multitude of amazing sights and treasures to discover. The British, despite their well-deserved reputation for the stiff upper lip, are warm and welcoming people making a visit to London a fun experience. Enjoy! 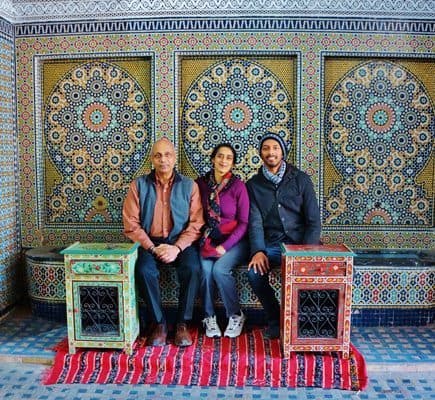 N.R. Venkatesh was a top film journalist in Bollywood, India and travel and creative writer in the Middle East. Nirmala has worked with leading English dailies in the Middle East. And Arjun is also the spark behind the family’s collective efforts at sharing their travel experiences with the world.