Washington: La Push and the Quileutes 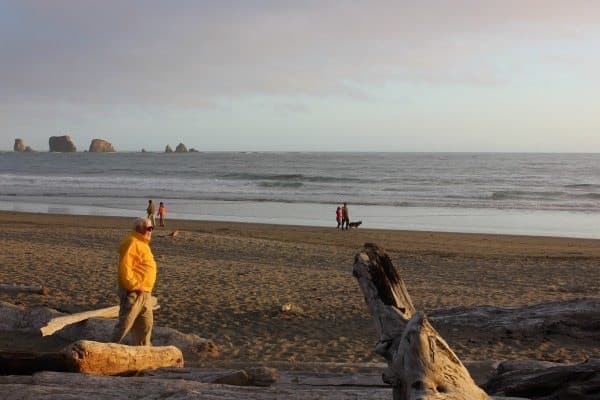 Walking the beach at La Push. As we maneuvered the final curve on Highway 101 North, the Pacific Ocean with its surf, boulders and firs seemed to explode before our eyes. This is the only highway in andout of La Push.

My husband Kent and I were almost at the westernmost part of the continental United States…La Push, Washington*. It is actually part of the Quileute Indian Reservation. The tribe manages the town, the resort and the fishing facilities.

As we strolled toward the beach, we were met by a sign that gave us cause to think: Evacuation in Case of a Tsunami or Earthquake. This was followed by other signs such as, Be aware of elk,coyotes, cougars and yellow jackets. Then finally came: By order of the Quileute Tribal Council non-tribal beach camping is only allowed with a paid camping permit. The Jersey Shore it is not. 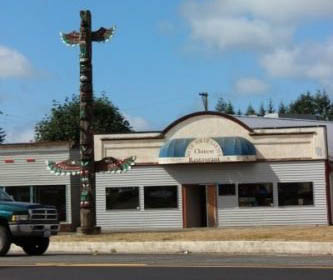 The Town Cafe at La Push, run by the local native American tribe. Before you even hit the sand, you have to get past the massive logs that have been tossed about like matchsticks by winter storms. The rocks have been worn smooth by the constant surf.

The Pacific continuously pounds against these huge outcroppings of rocks topped by firs. Even in August, the temp doesn’t rise much above 62 F. It’s definitely jacket weather.

After navigating the logs, you come upon the volumes of sand marked here and there by the charred remnants from the nightly bonfires. Needless to say, the beach is rarely crowded.

During the spring, whales can be spotted during their migration. The desk clerk told us that visitors come during the winter just to watch the rain pelt sideways. 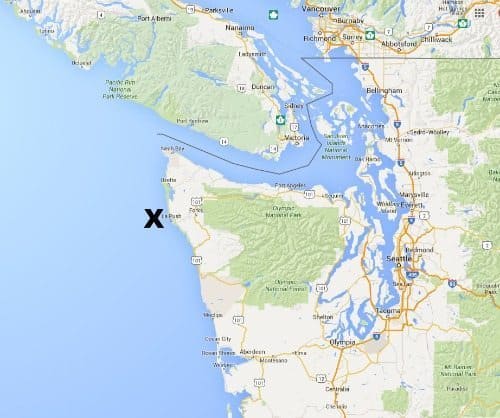 La Push is on the coast of Washington state. . They are carefully recreating their traditional skills and crafts while displaying a slower, more relaxed way of life.

Their language, only one of five languages in the world without nasal sounds, is taught at the local school. All of the businesses are owned by the tribe. Early in the morning and at dusk you can spot the Quileute fishing boats going out or coming in.

The Quileute Days Festival takes place in July. This is a tribal celebration of cultural heritage and modern lifestyle. It includes a fireworks display, a traditional salmon bake, dancing and songs, field sports, a horse show tournament, arts and craft display and food concessions.

The tribe recently built the Quileute Oceanside Resort and RV Park. This was the first business owned and operated by the tribe. It features fifteen oceanfront cabins, motel units, plus a campground. The units have fully equipped kitchens, (We hauled in the makings of spaghetti sauce) The leather-covered furniture is decorated with sports blankets displaying the black and red tribal logo.

All the rooms have spacious ocean view balconies. 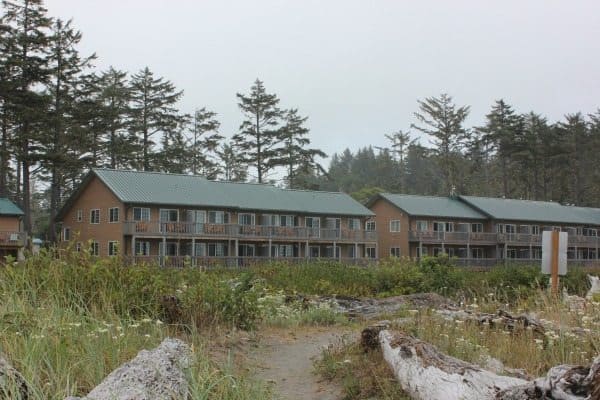 The Lodge at the reservation.
There are no TVs in the rooms and cell service is spotty. The sign reads: We do not have televisions, Wi-Fi or TV’s in our units in order to better facilitate your escape from the chaos of the outside world.

(There is a room however, in the main office with Wi-Fi. 24 hours a day)

Dessert was special. We hauled marshmallows, Graham crackers and Hershey bars over the logs and down to the beach where we built our fire.

(You can buy the wood) What better way to watch the sun set behind the rocks then munch on S’mores?

Upon returning to the inn, we ran into a problem…there are no lights at all on the beach so, how do you navigate all the logs in the dark? 21st century technology came to the rescue…we stumbled around to the light of a Smart phone.

Next to the La Push Beach are two other beaches known as Second and Third Beach. Each has a parking area off the highw 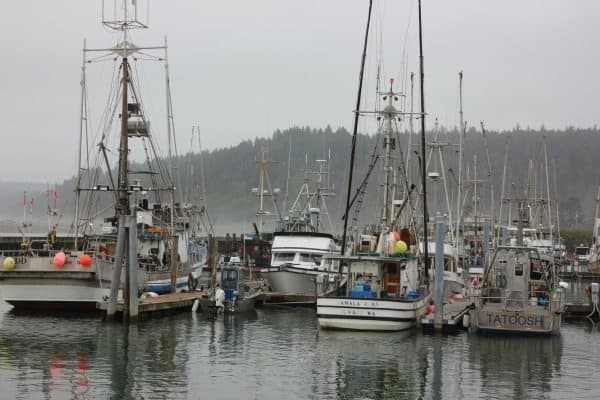 ay. After unloading your car, there is quarter- milehike through the forest and a climb down wooden stairs built on the side of a cliff. Because of the headland, (a narrow piece of land that projects from a coastline into the sea), you cannot walk between the three beaches.

The big sports here are kayaking and bicycling. Visitors can rent slips and moorings at the La Push Marina. Some of the boats boasted names like: Tatoosh, Deep Threat and Katie O.

One thing the Quileute Reservation doesn’t have is a casino. Can it be far behind?

Driving directions: From Tacoma: Go over the Narrows Bridge toward Bremerton. Pick up U.S. 101 North through Port Angeles, Forks and La Push.

Restaurant: River’s Edge Restaurant 41 Main Street. After a rocky start a few years ago, they now have an excellent operation. I recommend, the Scallops with Asparagus, and Indian Fry Bread

A Must See: La Push is surrounded by Olympic National Park. It’s about a 45 minute drive to see the Hoh Rain Forest. It rains twelve feet a year here. Hikes are mapped out for all levels of expertise. We took on the 1.2 mile Spruce Walk to the Hoh River and back.