ere so ludicrous they didn’t deserve to exist in the first place. Occasionally they explode violently. A few slip away almost unnoticed. Often the cause of death is either ‘got too greedy’ or ‘Napoleon turned up’. Now and then they just hold a referendum and vote themselves out of existence.

An Atlas of Extinct Countries is an atlas of 48 nations that fell off the map. The polite way of writing an obituary is: dwell on the good bits, gloss over the embarrassing stuff. This book refuses to do so because these dead nations are so full of schemers, racists, and con men that it’s impossible to skip the embarrassing stuff.

Because of this – and because treating nation-states with too much reverence is the entire problem with pretty much everything – these accounts are not concerned with adding to the earnest flag saluting in the world, however nice some of the flags might be.

Excerpt from the Book:  The Free State of Bottleneck 1919–23

Cause of death: debt collection by France

Another war, another attempt to redraw the map, another total mess. The ‘will this do?’ back-of-an-envelope approach with which these post-cataclysm conferences went about things is both impressively louche and depressingly familiar.

This time, in the aftermath of World War I, the Allies had occupied German territory west of the Rhine. They got out their pairs of compasses, sharpened their little pencils, and drew three circles – an American zone, a French zone, and a British zone – each with a radius of 19 miles, each centered on a nearby town.

Two of these towns – Mainz and Koblenz – were about 40 miles apart from each other. Very basic maths meant that the circles almost but didn’t quite touch. And with the Rhine to the south and no roads to the mountainous north, a weird unloved strip of land found itself cut off from the rest of Germany. Somebody with an active imagination decided the shape looked a bit like that of a bottleneck, and so the Free State of Bottleneck was born. The largest town in the bottle, Lorch, was declared the capital.

But the sort of great powers who couldn’t be bothered to draw maps properly certainly wasn’t bothered by what happened to a few thousand stranded Germans, and Bottleneck found itself unable to trade or do legitimate business with anybody because officially it wasn’t a thing.

The populace was forced to make ends meet by smuggling and the odd train hijacking. They issued an emergency currency, which featured a picture of locals having a much-needed drink. Sometimes they would moon the French troops garrisoned on their eastern border.

The Bottleneck technically came to end when the French decided to occupy the entire Ruhr valley – a response to Germany repeatedly defaulting on their World War I reparation payments – but, in 1994, some inhabitants of the former state tried reviving it, appointing ministers and even issuing passports. These are not recognized anywhere but do include a voucher that gets you a three-course dinner plus a discount on the locally produced wine.

The Republic of Vemerana May–September 1980

Cause of death: a coconut war

The Phoenix Foundation sounds like something from the hackier end of the Bond movies, one of those shadowy cabals of evil, big-business types who have meetings in a hollowed-out volcano. Which isn’t too far off the mark. Michael Oliver was a real-estate millionaire from Nevada.

Harry D. Schultz published a popular newsletter about how to avoid taxes (Margaret Thatcher being an avid subscriber). Both were fed up at having to pay for boring things like roads and hospitals that they might not personally use, and about having to obey laws that might not personally suit them, so they came up with a predictable rich-guy plan: start a new, totally libertarian country. 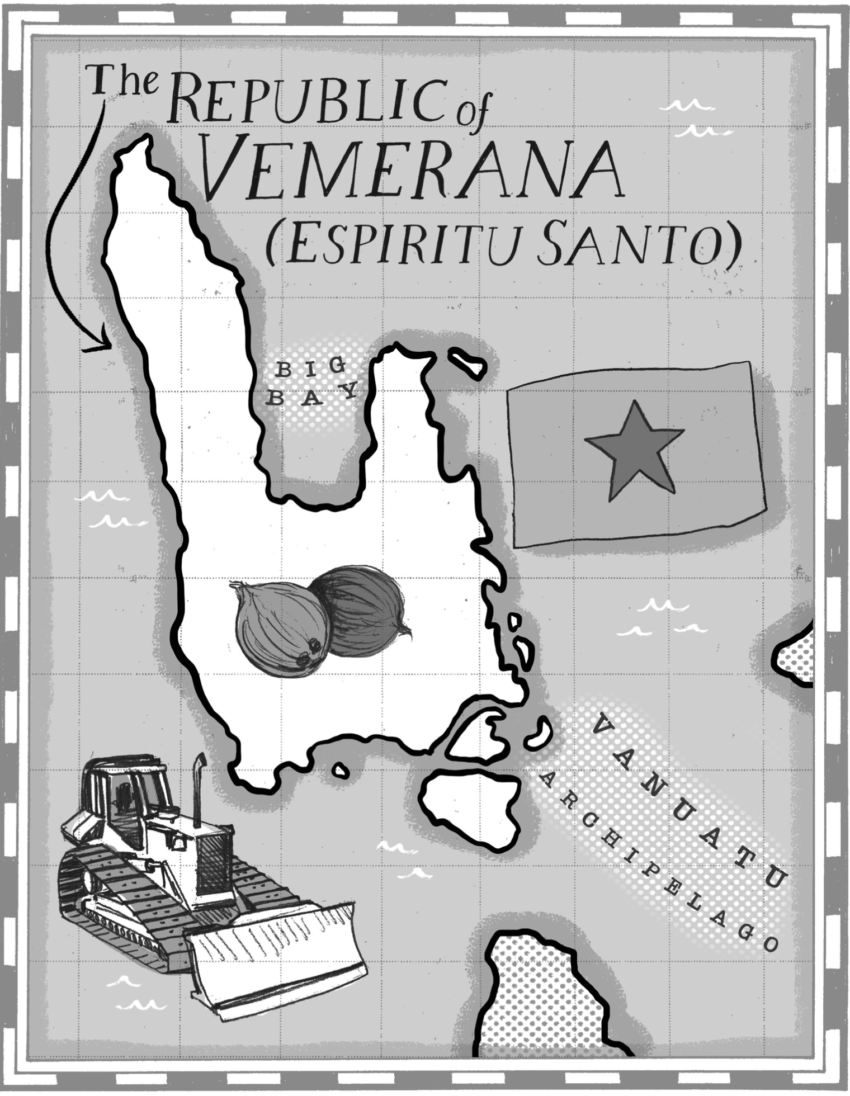 They’d already tried with the Republic of Minerva, a half-submerged reef in Tonga, but that hadn’t panned out because it was a deeply stupid idea. An effort to get a tax haven going in the Bahamas also came to nothing. The third time’s the charm, so they tried again in 1980, now targeting the island of Espiritu Santo.

It was here they got involved with bearded, messianic, half-Scottish former bulldozer driver Jimmy Stevens, who also went by the name ‘Moses’. He was already head of the New Hebrides Autonomy Movement, which – a little counter-intuitively perhaps – was campaigning against the imminent autonomy of the New Hebrides (on the cusp of becoming the nation of Vanuatu).

Jimmy Stevens called, in a slightly vague, cultish way, for a return to ‘the old ways’: a respect for the local beliefs and social structure that had been messed up by years of neglectful French-British joint rule. He issued a set of badges showing various ranks in the movement, from his own badge – ‘chief president’ – all the way down to the slightly less important rank of ‘school children’s guard’.

Funded to the tune of 250,000 dollars by the Phoenix Foundation (and blissfully unaware that his personal aims only represented Phase One of their sinister plan), Stevens led an uprising on the island, blockaded the airport, blew up a couple of bridges, and proclaimed the Republic of Vemerana.

Buy this book from Amazon
An Atlas of Extinct Countries

The New Hebrides government tried to get the British to help out, but the French hadn’t shaken that old sense of rivalry and forbade it. So, it was down to nearby Papua New Guinea to send a small force, starting what the foreign press patronizingly dubbed the ‘Coconut War’.

It wasn’t much of a conflict. Stevens’s followers were armed with bows and arrows, and the islanders were mostly quite friendly to the Papua New Guineans. When his son was shot after driving through a roadblock, a distraught Stevens declared that he had never meant for anyone to get hurt and the movement quickly fell apart. The Pacific Moses surrendered and wound up sentenced to 14 years in prison. The New Hebrides became Vanuatu. Somewhere, the Phoenix Foundation no doubt continues to do its slightly shadowy thing.

Gideon Defoe is the author of The Pirates! book series and wrote the screenplay for the Oscar-nominated film The Pirates In an Adventure with Scientists. He has written about the sex lives of animals and penned a computer game tie-in novel for Gollancz. He does film development work with Locksmith Animation and Studio Canal and is developing a sitcom with BBC studios.

Buy this book from Amazon An Atlas of Extinct Countries