Atlas of Cursed Places: A Guide for the Brave Traveler 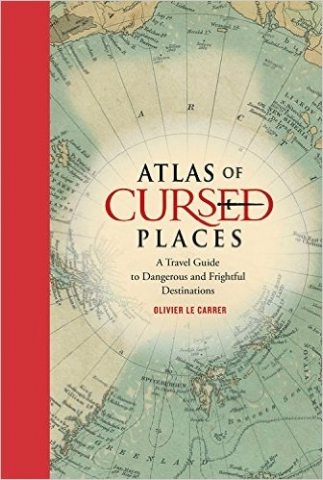 A Travel Guide to Dangerous and Frightful Destinations

Olivier Le Carrer’s newest book, Atlas of Cursed Places: A Travel Guide to Dangerous and Frightful Destinations, tells the stories of some of the world’s most dangerous places with historical narratives, maps, and illustrations to paint a vivid picture.

This collection of 40 locations starts in the heart of Europe venturing through the Mediterranean and Southern Africa, The Barents Sea to The Indian Ocean, around Bengal, between the Orient and Oceania, through America and across the Islands and the Atlantic Breeze.


Carrer is a journalist, a traveler, and a sailor. He spent the last 30 years exploring the world and visiting 30 of the cursed places he writes about in this book. He has written L’atlas Essentiel, Five Histoires de voile, and several other French books. He has also written several pieces on cartography and navigation.

Atlas of Cursed Places provides brave and curious travelers with a summary of many mysterious places waiting to be discovered and explored. “Organized by continents and oceans, this title is perfect for map lovers, history and travel buffs, as well as fans of the paranormal.”

“The blinding light in which Cape Guardafui is bathed is not to be trusted. Nor are the glinting turquoise waves that break on the light-colored rock, or the immaculate spume of the waves that the powerful monsoon winds drive into the strait in tight rows.

The extreme tip of the Horn of Africa conceals its perils beneath picture-postcard hues. There are no holiday resorts, and visitors are not greeted with garlands of flowers when they arrive; there are no thousand-year-old monuments to photograph or cruise programs offering excursions to picturesque sites.

It’s just the opposite — a cruel game whose rules please no one but apply to all, spreading misery both at sea and on land, among locals and travelers alike.

It’s impossible to know who to pity in this spiral of bad faith: the sailors taking this route gripped by fear and occasionally paying for the privilege with several months of captivity in inhumane conditions, or even with their lives?

Or the notoriously poor Somalis to whom the local employment agency has little to offer other than piracy?

Strictly speaking, there’s nothing new about piracy. It has prospered on all five continents since the dawn of time, often playing an important role in the economy of coastal regions, like a less-well-policed version of the toll system officially operated along shorelines and rivers. Contrary to popular opinion, piracy did not disappear with the rise of globalization during the second half of the twentieth century.

It simply relocated to the parts of the world best suited to this kind of activity. Pirates, just like conventional entrepreneurs, need the right combination of factors in order to succeed: an ample sufficiency of commercial traffic, a cheap and motivated workforce, the appropriate geography and, of course, the absence of any forces of law and order capable of obstructing free-market practices.

Somalia, a country of ten million citizens (a quarter of whom have been driven out of their homes), has been in the grips of chronic instability for more than a century and has continually been put to fire and sword by the nine rival factions battling for power.

Plus, the zeal of the numerous foreign trawler factory ships operating around Puntland over the last few decades has reduced fish stocks to such an extent that many Somali fishermen have left the trade.

Since agriculture offers little in the way of career prospects in this drought-sicken land, it comes as no surprise that some of these former fishermen have turned their interest to the twenty thousand vessels that pass along the 1,880-mile coast each year, sailing for or from the Suez Canal via the Red Sea.

Calling themselves badaadinta badah, or ‘saviors of the sea,’ many of these pirates believe that they are protecting their native waters and that the hijackings are a form of taxation. In small and swift skiffs, the attack group approaches the target from all sides, firing their weapons into the air.

When they pull close to their target, they throw hooked rope ladders onto the decks and board, taking the ship hostage for ransom. Logically enough, international organizations are frustrated by these attacks and the amounts demanded in ransom money for the restitution of ships and crews.

This has resulted in the implementation of various surveillance measures, including Operation Atlanta. Since its inception in 2008, this initiative, which has the blessing of the UN, has mobilized the navies of thirteen European countries, chiefly those of France, Germany, and Spain.

Initially, these measures resulted in a significant dispersion of the problem. In order to evade the vigilance of the participating navies, the pirates moved farther and farther away from the Gulf of Aden itself to attack shipping in unexpected places: near Seychelles, by the entrance to the Persian Gulf, and even in the middle of the Indian Ocean, up to 1,200 miles from their bases.”

Buy the book on Amazon here.