Water Island, in the US Virgin Islands

“Have you been to Water Island?” asked the friendly harbormaster in St. Thomas harbor. “It’s one of our best-kept secrets,” he said with a wink and a smile.

Getting to know the locals has always been our mantra when we travel. They will share things you won’t often find in a guidebook.

But then again, we’d never read a thing about Water Island in any of our travel books. Despite traveling to the U.S. Virgin Islands practically every year, we’d never even heard of this piece of Caribbean paradise.

Of course, our family of four, always on the hunt for new adventures just had to check it out. And we’re so glad we did!

Smallest of the four U.S. Virgin Islands this relatively unknown island is so-named by the Europeans for its natural ponds of fresh water.

This made Water Island a frequent stop for pirates seeking to replenish their ships’ supplies of freshwater.

The U.S. purchased the 500-acre island from Denmark in 1944 for only $10,000 with the explicit purpose of establishing a coastal defense installation to protect its St. Thomas submarine base during WWII.

But Water Island itself didn’t officially become part of the U.S. Virgin Islands until 1996.

When the Army vacated Water Island in 1950, they turned it over to the Department of the Interior. The deserted island was later leased to Walter Phillips, known today as the patriarch of the island. He constructed homes, roads, and a hotel.

Phillips also transformed the rocky rubble of Honeymoon Beach into the beautiful expansive shoreline it is today, lining the backside of the beach with rows of palm trees.

In 1965, Edward McArdle took over the island, building the plush 100-room resort known as the Water Island Colony Club. The “Commodore” of the club was none other than Leicester Hemingway, Ernest Hemingway’s brother.

The resort’s name changed over the years before being destroyed by Hurricane Hugo in 1989 along with most of the other structures on the island.

Quiet, tranquil, and a perfect place to relax, Water Island was ideal for our escape on a day two cruise ships had pulled into St. Thomas, bringing a hoard of tourists to the islands.

The moment we stepped off the boat on Phillip’s Landing, we noted the sleepy island is a throwback to simpler times.

There is no public transportation or taxis, no stoplights, gas stations, shops, hotels, or major commercial establishments. Less than 200 people live on the island, many are only here part-time.

Residents have to do all their shopping in St. Thomas and even pick up mail there. But as one Water Island resident on the water taxi commented “We don’t mind. It’s the cost of living in paradise.”

Getting Around the Island

Although the island is small, it’s a bit too much for walking. The number one way to get around is by golf cart. Even the locals use them.

It’s important to be aware that you’ll need a cart reservation from Rachael’s Rentals, the only gig on the island, so your transportation is waiting for you on arrival at the pier.

And with all there is to see and explore, and the challenge of its winding roads and hills, you’ll be glad you chose this option.

As for actually navigating the island, it can be a bit tricky, but, that’s all part of the fun. We laughed when we were given a hand-drawn map from the rental company that included no road names or topographical features.

A few stop signs on the island, however, do instruct drivers to “Stop. Den Go.” But we shrugged it off as all part of the adventure, reminding ourselves that “We can’t get too lost; after all, we’re on an island.”

Though there’s a smattering of homes, rental villas, and an upscale eco-camp with tent cottages and cabins for island visitors, most of the island is remote and uninhabited, which makes exploring both fascinating and fun. Each bend in the road led to yet another awe-inspiring view.

Getting the lay of the land was our first plan of the day, and occasional landmarks helped identify (and clarify) the direction we were heading.

The quintessential image of island living is sipping on a cocktail with toes in the sand, and the water’s edge just steps away from the surf.

Our first stop was Honeymoon Beach, a beautiful white strip of sand, located in the cove of Driuf Bay. Crystal clear, calm aquamarine waters made for a great morning of snorkeling. We even managed to spot a few sea turtles gliding by not more than 100 feet offshore, comfortably sharing the warm waters of the bay with swimmers and snorkelers. 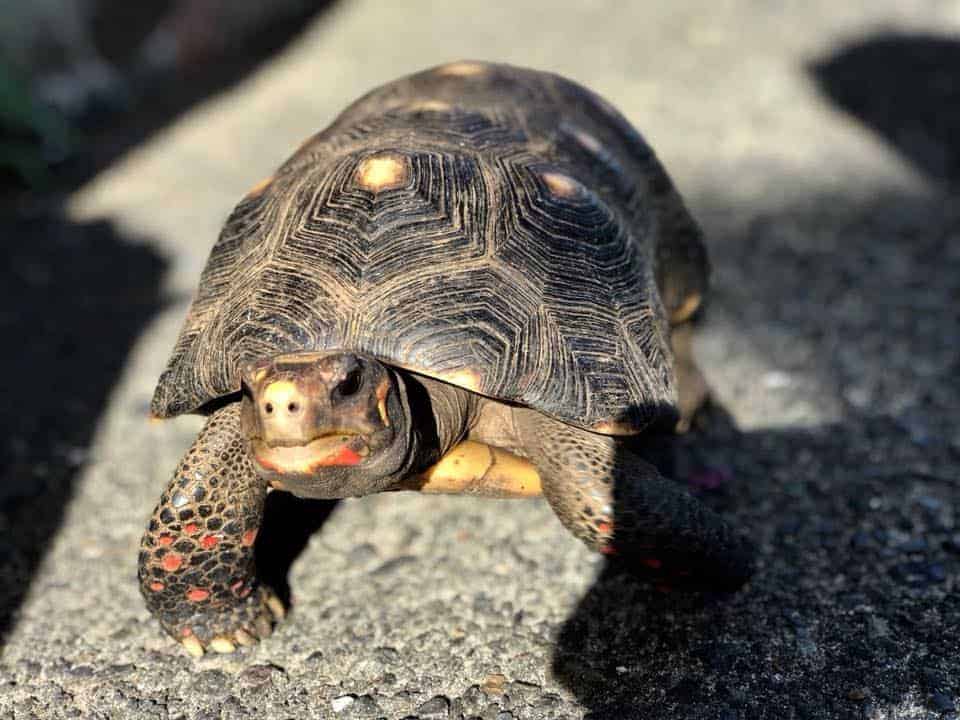 The beach also has plenty of complimentary beach chairs and umbrellas. Those hoping for more water activities will love that paddleboards, fly boards, dinghy boats, and jet skis are available for rent.

The atmosphere and ambiance here couldn’t be better. And how appropriate that just as our food and tropical drinks arrived, a pair of two-masted pirate-like vessels appeared in the distance and anchored in the bay.

Hiking on the Island

Meandering walking trails throughout the island make for excellent hiking opportunities with incredible views. The landscape is an interesting mixture of palm trees, cacti, and volcanic rock formations. The remoteness here and the unusual nature of the island can make even a peaceful relaxing hike an adventure.

Wind rustled through the trees and birds called overhead. And then, spotting a red-legged tortoise moving slowly across the trail was an unexpected surprise.

Another insider tip is to take along some insect repellant. This is a tropical island, and there are ticks and mosquitos, so, it’s always better to be prepared.

A short rocky hike from the main road trail led us down to Limestone Beach, one that’s quite different from soft and white sandy Honeymoon Beach.

We were the only visitors on this secluded stretch of coastline for the entire time we were here. The long, shallow beach is ideal for beachcombing.

Numerous tide pools form between rocks and old broken coral reefs. In these crystalline waters, we found a myriad of fish, starfish, hermit crabs, a whelk, and even some sea glass.

Thanks to another local piece of advice, we made sure to pack our dive shoes which came in handy for walking over the sharp, rugged terrain.

The only evidence that other visitors had indeed been to this remote beach is the fascinating colorful “Tree of Soles,” a place where lost shoes have found a home.

As a retired naval officer, my husband was quite excited about our next round of exploration- a trek to the remnants of an old, historic military bunker. 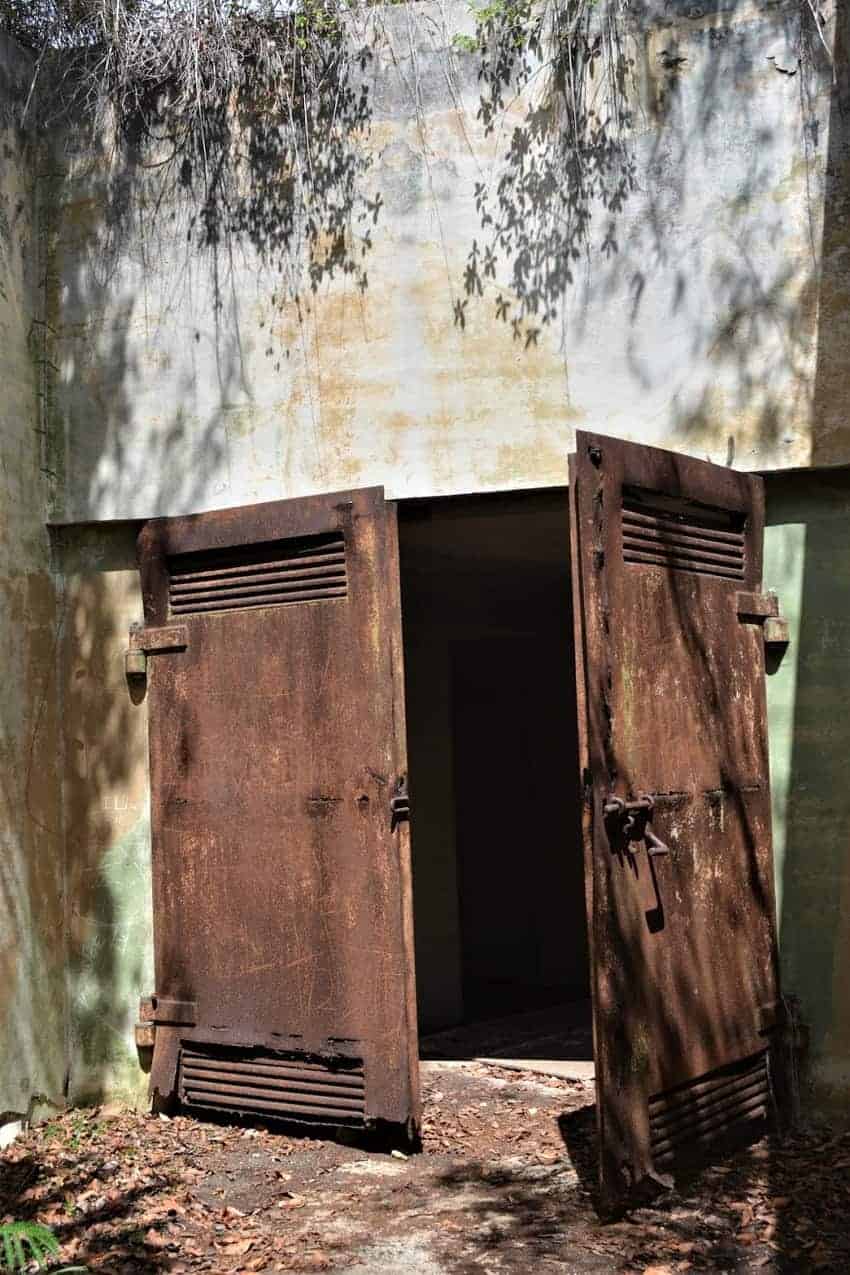 A combination of fascinating history and stunning views greeted us at Fort Segarra — a deserted hilltop fortification built as part of the U.S. Atlantic defense strategies during WWII.

The war ended before the fort’s completion, and the project was abandoned.  There are no formal tours, though self-guided tours are permitted at the visitor’s own risk.

Our first stop at the fort was to a cool underground tunnel leading to another cross-tunnel linking two massive unfinished shore battery emplacements. Two heavily rusted metal doors were the entryway. Its sole sentinel, a large lonely hermit crab, watching us warily before scurrying off to safety.

Flashlights in hand (thank goodness we brought them), we opened the squeaking heavy doors, then proceeded cautiously through the walkways and chambers of the tunnel.

The only remaining evidence of past activity here were old, rusted electric boxes with wires askew. We all agreed it seemed kind of eerie.

A short walk up the hill then led to abandoned underground ammunition bunkers and a large empty pillbox.

The way to see inside however was to lie on our bellies and look down. An observation deck on the roof of the pillbox provided impressive 360-degree views of the Caribbean Sea, other parts of Water Island, and the many picturesque bays and inlets of nearby St. Thomas.

We made one more stop on the way back to the pier for a final admiring look at the island’s vistas.

It was perfect timing as we stepped onto the water taxi just as the sun was just beginning to set on the horizon in a blaze of glory.

A quote by an unknown author says “Blessed are the curious, for they shall have adventures.”

A day on Water Island was certainly an unexpectedly fun adventure. And little did we know we’d get an interesting slice of unknown history and some very spectacular views thrown in at no extra charge.

Now we get to tell others about the smallest of the U.S. Virgin Islands that’s a lovely paradise, but no longer a secret.