In fact, it’s an American territory, even though they drive on the left side of the road. My fiance and I visited for five days recently. While my wife opted for more shut-eye in the early mornings, I went for hikes.

In the afternoons, we went on sailing trips around the island. We rented a car in St John, which gave us the ability to really explore this rustic island.

The white sun had just inched its way above the horizon as I left Great Cruz Bay and followed Centerline Road, which winds back and forth up and down steep hills all the way across St. John and provides access to several great hiking trails in Virgin Islands National Park.

The most notable is Reef Bay Trail, which leads down a steep hill through tropical forest to the ocean on St. John’s southern coast. The trail takes about an hour and a half one-way if you’re taking your time.

There’s a lot of natural and man-made sights to see on the way down. A short way into the trail there’s a huge kapok tree with a wide trunk that extends out from the main tree like a wooden wall. Further down the hill, there’s a huge bay rum tree and other species of trees with placards in front of them bearing names I’ve never heard of.

There’s also a lot of wildlife to be seen. A grey mongoose darted in front of me and tiny geckos bounced here and there across the path. A hermit crab rolled down the side of the hill and landed at my feet, curled up into its shell as it held its breath wishing for me to disappear. 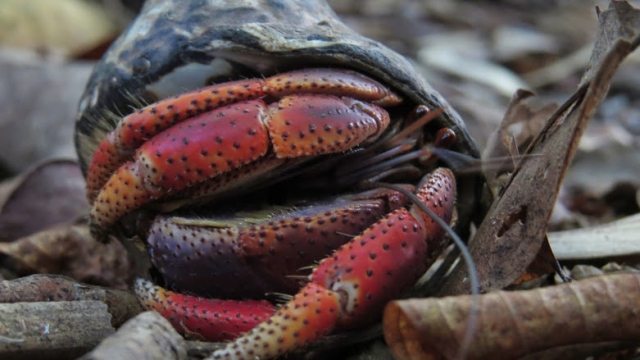 The ruins of old sugar plantations dot the trail, including Jossie Gut Sugar Estate, about halfway down. The brick, metal, and iron structures of these plantations are still prominent among the green forest 150 years later.

The highlight of the morning was the Petroglyph Trail, a 1/4 mile path off the Reef Bay Trail. At the end of this short trail is a set of freshwater pools at the side of a steep hill, about 75 feet high. There’s a waterfall here when it rains, but it was a dry as a bone that morning.

On the rocks below the waterfall are ancient drawings etched into the rocks. Archaeologists believe they were carved by the Taino Indians, who inhabited the island before Columbus arrived. The petroglyphs could be 1000 years old.

Some of the petroglyphs were representations of faces–many had two eyes, a nose, and a mouth. Others depicted a mysterious symbol–a rectangle set atop two circular coils–that has since become the symbol of St. John.

As I studied the drawings, dragonflies buzzed by me, a frog hopped by, and a hummingbird with a green throat flashed past me at 20 mph as its fluttering wings disturbed the tranquil air.

After leaving the petroglyphs and rejoining the main trail, I read in the travel book I was carrying that my pictures of these ancient symbols would have come out better if I had splashed water on them. Next time!

Another 15-minute walk down the main trail are the ruins of the Reef Bay sugar mill. I walked through several of the rooms where there are placards describing each stage of the sugar and molasses production process.

Right after the mill is the nice broad, sandy beach of Reef Bay. The walk back up the hill was pretty tough, especially the last stretch leading up to the road, but I got a good workout.

The northern beaches of St. John are among the best in the world. They dot the North Shore Road like a string of pearls, each somehow more spectacular than the other. Coconut palm groves stand before white sand beaches with stunningly clear water, filled with coral. The turquoise hue of the water is perfect; it almost puts you in a trance with the beauty.

Overlooking the beautiful Cruz Bay. This morning I took the car and drove out to Cinnamon Bay, braving hairpin turns while driving on the left side of the road up hills so steep that I felt my gunning the engine wasn’t going to be enough.

There are two trails at Cinnamon Bay: the Cinnamon Bay Nature Trail and the Cinnamon Bay Trail. The Nature Trail consists of an easy 1/3 mile loop through the forest, beginning at the ruins of another sugar plantation. Along the way are placards set up by the National Park Service explaining the flora and fauna you are likely to see on the trail.

If you’re looking for a workout, the Cinnamon Bay Trail is the way to go. From the road, I followed a steep rocky trail up through the forest; my brow was sweating not one minute into the hike. 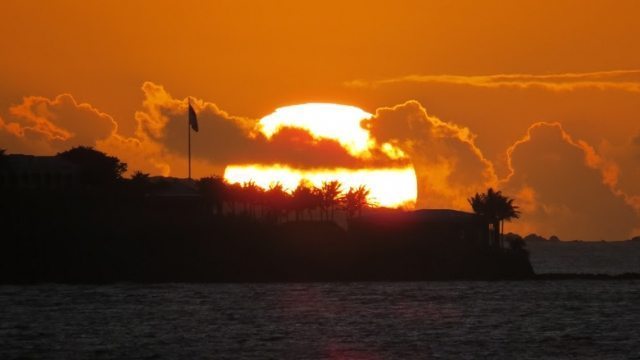 I came upon the turnoff for the America Hill Trail and took that to the left up yet another big hill.

As I turned a corner on one of the many switchbacks on this trail, a huge white-tailed deer, about 10 feet in front of me, jumped across the path and darted into the woods, looking back at me with its big dark eyes when it got to its place of safety.

At the hill are the ruins of the America Hill Estate House, an excellent example of 19th-century architecture in the Caribbean. The view was amazing; I could see Cinnamon, Maho, and Francis Bays, and the western edge of Tortola (British Virgin Islands). And to top it all off, a rainbow appeared.

I woke up not feeling so hot so I decided to stay local to Great Cruz Bay and take it easy for the morning. From the waterfront, I walked up a few steep hills to the top of a paved road, where I was awarded an excellent view of Chocolate Hole, the narrow bay to the east of Great Cruz Bay. I used other paved roads to skirt the edge of the bay, eventually coming up to another steep hill that overlooked the next bay down the southern coast of St. John: Hart Bay. 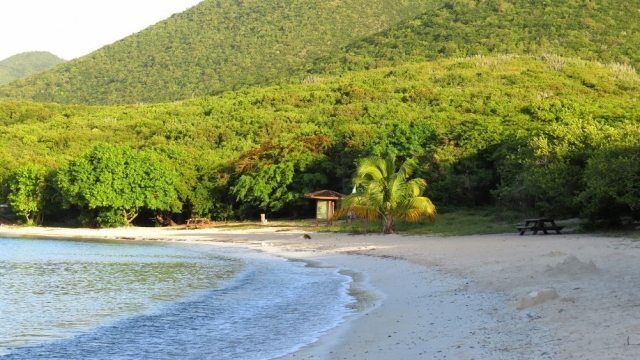 The view overlooking Hart Bay was outstanding; I could see for dozens of miles in almost every direction. Far off in the distance was the southeastern tip of St. John and in front was the dense woods of the Reef Bay Trail that I had walked through the day before. Below was a rocky beach being pounded with wave after wave in the windy morning.

Driving Across the Island

I woke up early again and drove across the island, about 40 minutes one way along Centerline Road to hike Rams Headl, ranked among the best trails on St. John. Even if I had just gotten out of my car at the trailhead and took a picture, the drive would have been worth it on its own. During the drive, the views of the rising sun above the ocean and the Virgin Islands National Park were stunning.

The way up to Rams Head brings you along Salt Pond Bay Trail, a short trail leading down to picture-perfect, deep turquoise Salt Pond Bay.

The first thing I noticed is that the landscape on this island is more like a desert than anywhere else on the island. Along the trail, barrel cacti dot the arid landscape like little red and green prickly landmines.

Admiring the scenery at one bend of the trail, I walked into some sort of cactus plant and it silently retaliated by injecting an inch-long barb into my foot.

I followed the trail past another bay, this one with a beach full of blue and grey cobblestones, towards Rams Head, a headland jutting out into the windy Caribbean Ocean. As I ascended this rugged terrain, the wind gusts grew stronger and the views improved.

I could see for dozens of miles in almost every direction. No one was around. I felt like a castaway stranded on a desert island peering out into the ocean for any sign of life.

Kevin Craw is based in Washington, DC and writes about his travel adventures in the Mid-Atlantic region and around the world.

Find out what’s new in the USVI in this GoNOMAD story about the islands.