France: A Journey into Flaubert’s Normandy 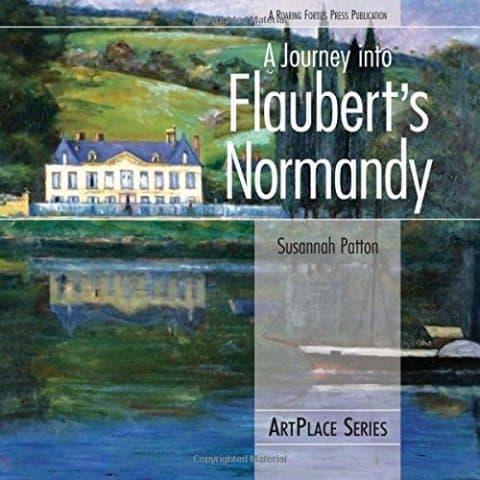 Susannah Patton’s guidebook, A Journey into Flaubert’s Normandy, explores the relationship French novelist Gustave Flaubert had with nineteenth-century Normandy. The author takes you on a journey through the region in Northwest France, visiting his homes and the places he featured in some of his most controversial works.

The excerpt takes you to his hometown of Rouen to Trouville to Croisset and more with descriptions of Flaubert’s personal connection to those places and photos of the vast landscapes and beautiful buildings. The book is also illustrated d with detailed maps and artwork of the period.

Patton grew up in San Francisco but has a fixation and fascination with all things French. She started her career in journalism in Paris at the International Herald Tribune, and subsequently wrote from the City of Light for Dow Jones, the Associated Press, and the Baltimore Sun. With a home in Albany, CA with her husband and two sons, Patton works as a communications manager, editor, and writer.

“While a student, Flaubert met Louis Bouilhet, a poet, and playwright who would later become a friend and intellectual compatriot so close that Flaubert called him ‘half my brain.’ Bouilhet was first a classmate at school, then a student of Flaubert’s father, and finally Flaubert’s closest friend for two decades.

The friendship did not flourish until the two had long left the school, but their acquaintance served as a foundation for their extraordinarily close personal and working relationship.

Though Flaubert seemed not to care about his own statue in Rouen, he fought valiantly to preserve his friend’s memory. After Bouilhet’s death in 1869, Flaubert wrote a blistering letter to city authorities when they initially declined his request to build a monument to Bouilhet.

Flaubert had offered to pay for the fountain and statue, and he was outraged when the city fathers rejected the proposal because Bouilhet was not born in their city and because his literary stature was not sufficiently grand. ‘Here was a man who in this century of great fortunes, dedicated his life to the cult of letters,’ Flaubert wrote in a letter to the city.

Bouilhet enjoyed some success during his lifetime, but he is best known now as the friend who encouraged and inspired Flaubert as he started work on Madame Bovary and successive novels. Flaubert called him his literary midwife and remained close to him to the end of his life. In Souvenirs Intimes (Intimate Memories), Flaubert’s niece, who was by then Caroline Franklin Grout, wrote about the close friendship.

‘He [Flaubert] would go for months on end seeing no one but his close friend Louis Bouilhet, who would come to visit on Sunday and stay until Monday. For part of the night, he would read his week’s worth of writing out loud. What wonderful hours of conversing! There were loud cries and continual exclamations, disagreements over the rejection or acceptance of an epithet, reciprocal encouragement.’

Bouilhet was born in Normandy, in the nearby town of Cany but spent most of his life in Rouen. He lived near the Vieux Marché on the Rue des Bons-Enfants and then near the Collège Royal on the Rue Beauvoisine. Unlike Flaubert, who never held a job and lived his entire life on an income provided by his father, Bouilhet needed to work. He was named curator of the municipal library in 1867.

Flaubert’s public tirade against Rouen’s government was not entirely in vain. In 1882, thirteen years after Bouilhet’s death and two years after Flaubert died, the city inaugurated a monument to Bouilhet–a bust above an ornate stone fountain–on the corner of what is now Rue Lecanuet and Rue Jacques-Villon, near the library and the city’s Museum of Fine Arts.”

Buy A Journey into Flaubert’s Normandy on Amazon.