Journey By the Book: A Guide to Tales of Travel

Journey by the Book is a Salute to the Armchair Traveler 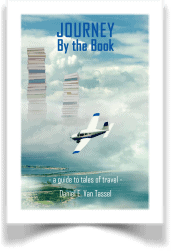 Journey by the Book is a tool enabling the pathfinder—whether tenderfoot or veteran scout—to explore uncharted seas and territories in the kingdom of travel.

Author Daniel Van Tassel discusses a vast sampling of travel narratives. If the story uses a voyage, pilgrimage, or journey as pivotal for its meaning and structure, it will figure prominently in the array of tales he tallies.

The book defines categories of travel literature and discusses the gamut of impulses prompting travel, travel writing, and travel reading.

The array of storytelling forms in travel literature are testaments to what the genre can do: stoke and satisfy a reader’s wanderlust. Journey By the Book will be published in May 2022 by Sunbury  Press.

Excerpt from Journey By the Book: Kon-Tiki, a Mariner’s Struggles

The Kon-Tiki Expedition, by Thor Heyerdahl, from one complete reading to the next, holds readers captive. The book portrays mariners’ struggles to survive and their indomitable quest to solve a puzzle and gather firsthand information about other peoples and their places of habitation.

Kon Tiki attempts in the mid-20th century to replicate the primitive mode of sailing using a log-lashed raft and a single sail. The author records discoveries and provides lore and scientific data that other explorers have built on and revised.

Visit the Kon-Tiki Museum in Oslo

Central to the account of a journey on the high seas is the narrator’s spirit of adventure and excitement of sharing the experience day by day, episode by episode, detail upon detail.

Heyerdahl invokes comparisons with his use of apt similes, make references to aspects of a culture shared by the reader, and, in addition to allusions, include lines from literature and details drawn from a common education.

Kon-Tiki is a wonderful adventure, with twists and turns of excitement occurring every nautical mile.

At the outset, Heyerdahl articulates his theory that the Pacific islands were visited and inhabited by a race of Peruvians, Inca Indians, who 1500 years ago, long before the Spaniards landed in Peru, used balsam wood rafts to sail the 4,000-plus mile journey.

Getting Ready to Go

Getting ready to embark takes up nearly a third of the book. First, Heyerdahl must succeed in securing financial backing. Next, he selects his crew, a variety of talented men with whom we get intimately acquainted as the voyage gets underway.

On site in the jungles of Peru, the ritual of felling the perfect balsam trees and floating and hauling the logs to the shipyard for the raft construction moves the narrative forward.

Each of the dozen logs is christened before it is taken down. The work was Herculean: “The ax changed hands time after time, while the splinters flew and the sweat trickled in the heat of the jungle” (53). Supplies, including a radio and basic navigational tools, World War II rations and test equipment, two-hundred coconuts, and sufficient food and water, are obtained and assigned locations aboard.

The raft was built and launched on April 28, 1940; the journey for a half-dozen Scandinavians, a parrot, and a hitch-hiker hermit crab began.

The saga has the men catching fish and rainwater, taking turns at maintaining the course, a regimen of two hours at the helm and three hours’ rest, and, when possible, making radio contact with persons elsewhere on the globe.

Storms, Waves and a Shipwreck

They frequently contend with waves and storms and, finally, with a shipwreck, going aground some distance from the planned destination. As the narrator notes, the voyage quickly “turned landlubbers into seamen” (80).

A tightly knit crew, they do not see anyone else until they reach the Pacific Islanders at the end of their trip. Heyerdahl is adept at characterization and makes each member individualized by distinguishing their manners, appearance, actions, and outlook.

Their lives, their sport, and their scientific curiosity were well served by all the fish of the sea, including the flying fish that landed plentifully on the craft and didn’t need to be caught or netted, and the wonderful variety of birds overhead.

All creatures, including sharks, whales, and dolphins, as well as many species of fowl, become companions and not simply prey or specimens for study.

Chapters are given headings for the topics to follow, providing a sort of gloss. “Half-way” is the title of a chapter that tidily marks the halfway point both in the narrative and voyage.

Throughout, the voyage and its adventures and challenges are presented in a lively manner, keeping the Adventures On The High Seas 121 reader attentive as the days and nights unfold during the three months it takes to complete the trip.

There is no room for tedium. Instead, every moment, every mile, is significant. The reader books passage and vicariously participates in the thrills, upsets, and ultimate success and celebration of the voyage.

From the beginning point of planning to the embarkation, to the navigating and keeping body and spirit together, to the troublesome going aground at the end, readers experience the trip as if actually taken.

The reader, as an armchair voyager, floats along on the raft, joins one or two of the stalwart mariners when they are out in the rubber boat or lowered in the basket for safe fun and observation, and shares the glories of the day and the wonders of the night.

Writing about the vision that night on the high seas produces, Heyerdahl comments: “Coal-black seas towered up on all sides, and a glittering myriad of tropical stars drew a faint reflection from plankton in the water.

The world was simple—stars in the darkness. Whether it was 1947 B.C. or A.D. suddenly became of no significance. . . .

We realized that life had been full for men before the technical age also—in fact, fuller and richer in many ways than the life of modern man” (131-32).

From the rubber raft, seen in the darkness punctuated by stars, “the Kon-Tiki rose out of the seas to sink down again behind black masses of water that towered between her and us. In the moonlight there was a fantastic atmosphere about the raft.

Stout, shining wooden logs fringed with seaweed, the square pitch-black outline of a Viking sail, a bristly bamboo hut with the yellow light of a paraffin lamp aft—the whole suggested a picture from a fairytale rather than the actual reality” (133).

Time evaporates for them and yields a transcendental moment. “We could well see in our mind’s eye the whole flotilla of such vessels, spread in fan formation beyond the horizon to increase the chances of finding land, when the first men made their way across this sea” (132).

There are epic touches, too, such as “when at night our glowing road guide, the sun, climbed down from the sky and disappeared beyond the sea in the west with his whole spectrum of colors, the gentle trade wind blew life into the stories of the strange mystery of Easter Island” (134).

Unlike Odysseus, who is left with not even a remnant of his sailors at the end, the whole crew of the Kon-Tiki arrives at their destination, surviving the wreck of their raft on the perilous coral reef.

Not back home and not fending off suitors, these epic heroes, however, are welcomed by the islanders in a ceremony bestowing honorary citizenship on them and rechristening them with the names of the islanders’ revered forbearers.

Even though the return trip is anticlimactic it rates several poetic paragraphs at the close of the book. 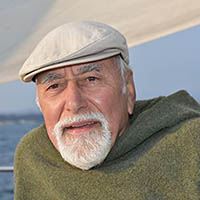 Author of Back to Barron, a chronicle of growing up in small-town-and-rural mid-century America, Daniel Van Tassel, the son of a Lutheran minister, graduated from St. Olaf College and earned his M.A. and Ph.D. degrees in literature from the University of Iowa. His scholarly publications include articles on Shakespeare, Hardy, Lawrence, and Beckett and numerous book reviews in Modern Fiction Studies.

Retired and living in Northfield, Minnesota with his wife Rhoda, whose career focused on teaching courses in art history and the humanities, he now teaches courses, both in-person and via Zoom, in the Cannon Valley Elder Collegium program.

The past ten years he spent writing and revising a manuscript now published as Journey by the Book: A Guide to Tales of Travel. Focusing on works recounting a voyage, pilgrimage, or journey, it was designed to appeal to armchair travelers.