“I thrive on sheer sensory overload. I’m Alice down the rabbit hole”

Dina Bennett’s on the road again―and she can’t stop! Having completed the 7,800-mile Peking to Paris Classic Car Challenge while braving carsickness and patching rocky marital relations, she’s once more in over her head, enduring100,000 miles of road trips through the world’s out-of-the-way places. She’s a travel junkie!

Drawn to strange foods and intriguing views into the kaleidoscope of local life, and with a knack for getting into―and out of―awkward situations, Dina gives you the world in all its glory. She’s a born storyteller, uncovering the curious and unusual in the ordinary, bringing you along on vivid experiences in laugh-out-loud style. Neither particularly brave nor wild, she opens her diary of personal triumphs and embarrassments, suspense and discovery, in places most will never get to.

Join her as she stands knee-to-knee with a Tajik border guard in his bedroom, hunts down camel pad meat in the street markets of China, and seeks out the source of mare’s milk in Kyrgyzstan.

Whether stranded on a sandbar in Myanmar’s Chindwin River or sharing barley beer with an ex-Black Panther in Ethiopia, Dina’s observations are half prying neighbor, half best friend gossiping together on the crooked path to enlightenment.

The tales in A Travel Junkie’s Diary: Searching for Mare’s Milk and Other Far-Flung Pursuits

plunge the reader right into the midst of exhilarating travel experiences, with all the smells, sounds, sensations and emotions of being right there. They are by turns fascinating and frightening, endearing and bittersweet, humorous, humiliating, and always engrossing. 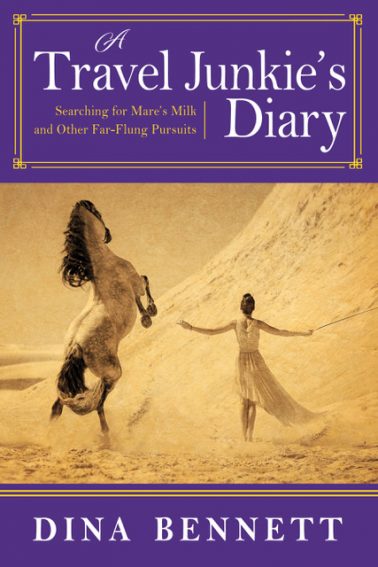 Borneo jungle trek would be to a walk to the mailbox.

>Though the means of locomotion is identical, the experiences have nothing in common. When given the choice, we will take whatever route is less traveled by foreigners.

>If a trip works out right, I have a chance not only to become something other than I was, but to find a mirror reflecting all the more clearly the beauty and richness that is my life back home.

>Paul Theroux said it best when musing on the peculiarities of travel: “You’re like a wraith, with your face pressed to the window of another culture, staring at other lives.”

> This situation often demoralizes me. I don’t want to be the Little Match Girl, nose flattened against that frosty window, able to see the indulgent glories a few feet away, unable to join in.

I want to feel I’m standing under the Niagara Falls of sensory experience, drowning in serendipitous personal interaction. On every road trip, after days of driving and no human encounters to speak of other than with gas station attendants, I reach a point where I’m disheartened.

My mind grumps, “What am I doing here? Why am I once again putting myself through this numbing routine that’s predictable only its continuous uncertainties, something I’ve never enjoyed?”

I don’t say this out loud, in part because it’s usually too clattery in our car for Bernard to hear me, but also because doing so would inflict my anxieties on him, and I learned long ago he has little understanding and less compassion for my fretting.

I’ve thought endlessly about my reasons for once again getting back in a car, maps in hand, to see what’s out there. For one thing, driving through a country gives me an unparalleled view of ordinary life as led by the locals.

More importantly, at some divine moment during our often tedious, always arduous road trips, the car will place me at just the right place at the very instant someone looks up and locks eyes with me.

Before they can even say, or more likely mime, “Would you . . .” and definitely before Bernard can be consumed by French manners that require him to decline all invitations on the premise that “they’re just being polite,” I am in, ready to participate in whatever they have to offer, regardless of what it is.

Does that make me a bit of a Peeping Tom? Sure. But every good traveler has a bit of the voyeur in her. Besides, I’m a hosted Peeper, happiest when inspecting someone’s musty rumpled bedroom, seeing what’s hanging in their closet, looking at their toiletries, realizing their floor isn’t carpeted, it’s cardboard.

I thrive on sheer sensory overload. I’m Alice down the rabbit hole, one minute on the sidewalk, the next inside a village compound in the midsection of Turkey, picking herbs from the owner’s garden and making a mid-morning salad with him, all because I chose to linger staring at sheered fleeces drying on his whitewashed wall.

The most memorable encounters often begin one way, and then, without me noticing, veer in a different direction, something I discern only after the fact. I’ll share one such with you, by way of example.

On a sunny February day, we were walking through the fifteen-hundred-year-old Muslim citadel of Harar, Ethiopia, a maze of winding cobblestone lanes hemmed inside old stone walls. With the majority of Ethiopians devoutly Coptic Christians for two millennia, Harar is an anomaly: the fourth holiest city of Islam, after Mecca, Medina, and Jerusalem.

As we wandered a narrow lane, pressed by house walls painted lime green and ochre, I noticed a hand reach out from a curtained doorway to wave us in. While I never know when or where such contact will occur, I have learned that world events have nothing to do with the hospitality and warm openness of local people.

That I, an anonymous Jew, should be bidden into the home of an anonymous Muslim did not surprise me, but the unexpectedness of it certainly did thrill me.

It was cool inside those thick mud walls, quiet and dusky too, as there were no windows. A shelf filled with books of the Koran lined the back wall of the high-ceilinged room. On a raised seat sat the neighborhood sheik, a small-time patriarch nevertheless essential to the well-being of his community, a genuine multi-tasker, acting as counselor, mediator, advisor, and religious leader for his community.

This small man with smooth, copper-colored skin and a scraggle of beard, bade us sit on one of the carpet-covered benches below him. From his platform, he surveyed us frankly as if taking our measure.

Looking up at him made me feel like I was back in kindergarten, seeing in the eyes of my teacher that I had done something naughty though I was unsure what. My dignity reasserted itself when he gestured for coffee to be made for us. We were guests after all, not fractious children.

We sipped sociably, without conversation, while I mused how I was having coffee with a sheik, becoming part of his story, sitting on the same bench whose hard surface had hosted the buttocks of myriad supplicants.

I was delirious with happiness to be smelling, touching, tasting a moment in this sheik’s life. Everything about him—his clothes, his living quarters, his life—seemed so old-world, as if time had literally passed him by. This calmness, I thought to myself, is what it means to live a life without modern distractions.

Then the sheik pointed to a bucket below him, from which his assistant retrieved some branches of glossy leaves. For an instant, I thought he was displaying his garden prunings.

But the street had been devoid of anything growing, so it could only be one thing: qat (pronounced ‘chat’), the coca equivalent used as a stimulant and appetite suppressant throughout the Horn of Africa and the Arabian Peninsula.

I was now about to suffer the effects of my unquenchable curiosity. I plucked a handful of leaves, eager to show I knew what I was doing, though in reality, I’d only ever nibbled a corner of a leaf prior to that moment.

Even Bernard, who normally doesn’t indulge in things not found in the Larousse Gastronomique, took a few leaves for himself.

I suspect it dawned on him, as it did me, that one does not refuse the full hospitality of a sheik, however modest his empire may be.

The leaves were tough and, well, leafy, as if I were eating an office ficus plant. I waited to be suffused by a wave of euphoria, but all I felt was the embarrassment at all the green bits now stuck in my teeth.

Coffee sipped and qat chewed, we rose to take our leave, unsure when the muezzin would next issue a call to prayer and not wishing to impose further. The sheik motioned us to be patient and then mimed taking a photo.

“This is odd,” I whispered to Bernard. “I hadn’t expected he’d let us take a picture of him.”

I reached for my camera. He swatted at the air for me to put it down. And then he pointed himself to us. “I’m not sure I get what’s up here,” Bernard whispered back. “But it looks like he wants to take our picture.”

“Okay,” I thought. “He’s the sheik. If rising up and taking the camera from a lady so he can photograph us isn’t what he’s used to, I can deal with that. I’ll bring it to him.”

He shook his head as I advanced, one arm digging around in his thobe, the loose-fitting, ankle-length white robe worn by many Muslim men.

For a second, I thought he was scratching himself, which struck me as an un-sheik-like thing to do in front of a woman, what with Islam espousing modesty and all.

Withdrawing his hand from a pocket hidden within the folds, he displayed a late-model iPhone as matter-of-factly as a baker would hold up a loaf of bread.

Then he raised it and snapped our picture. “My brother in Arkansas will like this. We Skype each other weekly,” he said in perfect English, as he waved us out.

The above piece is excerpted from A Travel Junkie Diary with permission from Skyhorse Publishing Inc.

Buy this book on Amazon A Travel Junkie’s Diary: Searching for Mare’s Milk and Other Far-Flung Pursuits

Dina Bennett grew up in Manhattan and spent most of her adult life in Colorado.  She now resides with her husband Bernard in a small village in Provence.  Dina is the author of Peking to Paris.  Her new book, A Travel Junkie’s Diary, will be published by Skyhorse Publishing August 2018.