Eating Your Way Through Boston’s Chinatown

Just when you thought you knew Boston, Jacqueline Church has much more to teach you

By Jackie Cohen and Jill Webb

Between all the Little Italy’s, Chinatowns, and Jewish quarters, throughout  American cities, ethnic enclaves help bring culture and community support to immigrants when moving to the United States.

When wandering into one of these communities as an outsider, you are greeted with a new language, exotic smells, and traditional customs, and Jacqueline Church will be the first to tell you Chinatown in Boston, Massachusetts is a perfect example of that.

The fastest trip abroad from Boston is right down the street from South Station, where locals-turned-tourists step into an authentic Chinese neighborhood.

Knowledge of the Culture

Her immense knowledge of Chinese culture, cuisine, and tradition makes her tours of the neighborhood compelling, detailed, and like no other neighborhood walk-through you have ever experience. Her knowledge and passion for the subject make her guided tours of Chinatown a unique way to learn about the otherwise unknown details of the Boston neighborhood.

Sandwiched between the Financial District, the Boston Common, and the South End, Chinatown is perfectly accessible for both travelers from  Logan Airport looking for a long-layover activity, or even Boston residents for a fun, offbeat daytime activity.

Meeting at the elaborately designed welcoming arch that serves as the entrance to Chinatown, Church leads guests into a world they never knew existed in their own city.

Boston’s Chinatown- then and now

Chinatown has a population of a little over 12,000 residents, but that includes the luxury apartment complexes that have been popping up around the border of the area. So, the Chinese community itself is lower than that.

Church says these expensive apartments are not part of the “true Chinatown community”, and uses her tour as a way to educate both tourists and locals on the history of the area, including the more recent matter of gentrification.

The development of these upscale apartment complexes is slowly pushing Chinese immigrants, both newly arrived and those who have been settled there for generations, out of their neighborhood.

“People in Chinatown are having a hard time meeting their rents now because the rents are going up,” Church said.

However, regardless of impending gentrification and rising rent prices, the Chinese community of Boston is truly resilient, and they are tough. In the first stop on the tour,

a small but jam-packed Asian supermarket on Lincoln Street, Church stops in the rice section to explain just how Chinatown originated.

After a strike at the Sampson Shoe Factory in North Adams, Massachusetts, some of the first Chinese immigrants were brought from Hong Kong to the United States in 1870 to break the strike.

“Chinese communities of these laborers were actually pretty sad places because they were separated from their family,” Church said. “They thought they were gonna come and make pockets of gold and go home wealthy men, but it didn’t work out that way.”

Strikers had hostility against the new Chinese immigrants, causing disdain against them throughout the country as they attempted to survive and began building businesses, and the Chinese food Americans have all grown to know and love.

Funny enough, the typical American-Chinese starchy sauce-based take-out isn’t what traditional Chinese food is, Church explained as she led us through aisles of bok choy, tofu, Asian candies and back to the fish section.

Immigrant men came from China during this gold rush not knowing how to cook for themselves, used to having their loving wives dote on them day in and day out, doing most domestic work.

The men knew the basics of their native cuisine, using woks and knowing some of the main ingredients, but for the most part, they were learning from scratch.

The men bought themselves woks and American vegetables and attempted to copy their mothers and wives cooking.

The helpless men could not achieve their traditional recipes and solved the liquidy-ness of their sauces by pouring in cornstarch to the wok, lots of cornstarch.

After G-Mart, Church walked us over to

on Hudson Street, to try some of their famous barbecue pork, which is called char-siu in Hong Kong where it originates.

Walking into the shop, your nose is delighted with the overpowering flavors of all the roasting meat. With citrusy undertones, the tiny, grim room is enhanced by the rows of hanging Peking duck and other cured meats.

Church pulled out a little bag of wet naps and toothpicks for us to sample small slices of the char-siu, which had a melt-in-your-mouth texture and a delightful orange aftertaste.

For locals, this is a perfect place to pick up a whole animal to serve as an at-home meal. Their dinner guests with not be left disappointed, as the meat is both unique and delicious.

Little did we know, Chinatown had so much than meets the naked eye. We made our way to Ho Yuen Bakery, a small, crowded Chinese bakery. Church reminded us that most Chinese pastries are savory, not sweet.

We tried three different varieties of the bakery’s Delicacies. A mooncake, a traditional meat and grain-based bread with a cured egg yolk inside, meant to mimic a full mood, a sweet coconut bun, and a sweet taro bun.

Our next stop was not food related, but an incredibly important facet of traditional Chinese culture.

The neighborhood apothecary, where locals to go to receive a diagnosis and prescription for any one of a multitude of ailments, from digestion problems to headaches.

With a wall of prescriptive natural remedies, herbs are mixed together and boiled as tea. These personalized medicinal treatments have been used by the Chinese for a millennium, and they swear by it. 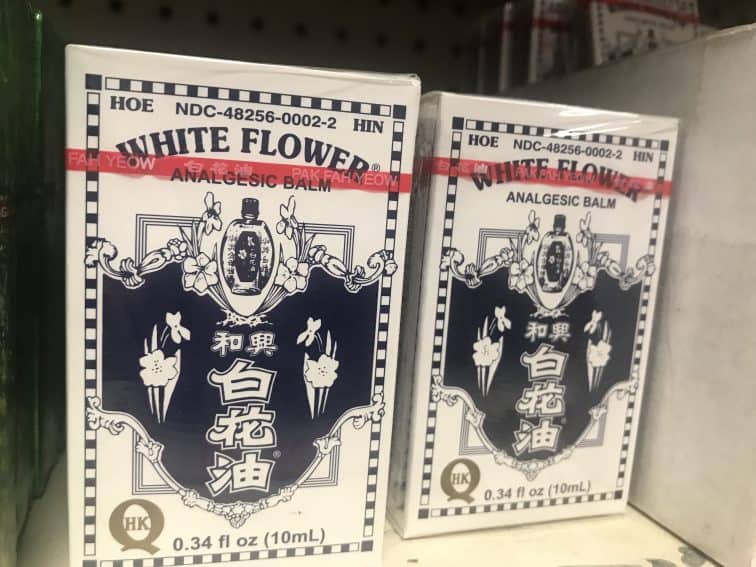 By reading a patient’s Qi (pronounced, Chi), herbalists are able to conclude what their problem is and concoct a mixture of natural herbs, plants, and flowers making a bitter tea. These teas, essential oils, lotions, and potions cure patients naturally, without the use of drugs or harsh remedies.

Church is a frequent visitor of her local herbalist, who has helped her with migraine headaches with a light menthol oil which she dabs onto her temples, to chrysanthemum tea for seasonal allergies.

After the apothecary, we were onto our next stop, Tea-D0 Contemporary Tea House, a Taiwanese bubble tea cafe with a laundry list of flavor options.

Church helped us select one hot and one cold option. Our group decided on Lychee green hot tea and Taro Milk bubble tea, which were both equally delectable it was hard to choose a favorite.

She ordered the teas and pulled out a few cups from her bag, distributing tastes for each of us. She explained the rise in popularity of Boba, or bubble tea, and its roots in China.

In case that wasn’t enough, Church led us to our final and most extravagant stop on the Chinatown tour, Hei La Moon. The 800-seat, two-floored, line-out-the-door establishment was a whirlwind at lunchtime.

With a crowded foyer and a long line behind the hostess’s podium, Church waved at an employee who radioed someone in another part of the massive restaurant.

The hostess waved back at Church, who led us through the hungry crowd. That’s when we knew, Church was well-known throughout Chinatown.

Dim sum is a typical style of Chinese cuisine prepared as small bite-sized portions of food served in small steamer baskets or on small plates. The dishes are usually served with tea and together form a full tea brunch, mostly eaten early on in the day.

Waiters with narrow carts make their way through the crowded dining room, offering guests small plates of different dishes. For special orders directly from the kitchen, you must flag down a manager, who will proceed to take your order.

The whole experience is exhilarating, from the unique tracking pad to list a table’s orders, to the secret symbolism of an upside-down teapot lid, to tapping two fingers on the table to say thank you without speaking with your mouth full, the Chinese have really perfected their eating habits.

The loud dining room is full of families, individuals, and everything in between. We tried steamed Chinese broccoli with garlic, dumplings of many varieties, fried taro fritters, and other bite-sized treats.

Between her preparation of packing handy wipes, cups, and toothpicks, to her endless knowledge of the subject, Church offers both tourists and locals a unique perspective on this interesting ethnic enclave smack dab in the middle of Boston.

If you think you know Boston, think again. Church will teach you lessons about Chinese immigrants to Boston’s rich past and rocky start, and about their establishment of a flourishing, supportive community.