I recently had a WhatsApp gathering with a group of friends I traveled with on a pre-COVID 19 trip to the Castilla y Leon region of Spain. “Don’t worry,” I said, “one day we will meet again in a crowded tapas bar, eating and drinking with abandon.”

It seems that some of the things I love most about travel in Spain are the very things threatened the most by the COVID 19 virus.

The crowded markets, the bustling tapas places, five deep at the bar so full of laughter, and new friends. The sharing of food like the succulent Jamon Iberico often passed around a table and traditionally eaten with your fingers.

At the writing of this article, Spain is gradually reopening again to international travelers in July if the virus remains under control. Initially, the EU has banned travelers from the US, but the status will be reviewed every two weeks.

According to Airbnb Inc co-founder Brian Chesky in an interview by Axios, “Travel will never, ever go back to the way it was pre-COVID. I think you’re going to start to see travel becoming more intimate, more local, to smaller communities.”

Castilla y Leon: is That Place

Only an hour and a half away by bus or car from Madrid, yet a world away from the hustle and bustle of the capital city, such a place exists.

Castilla y Leon is the largest autonomous community in Spain. Approximately the size of Portugal, yet with only two million residents, its vast landscape is dedicated to agriculture, livestock, and vineyards that produce some of the world’s finest wines. 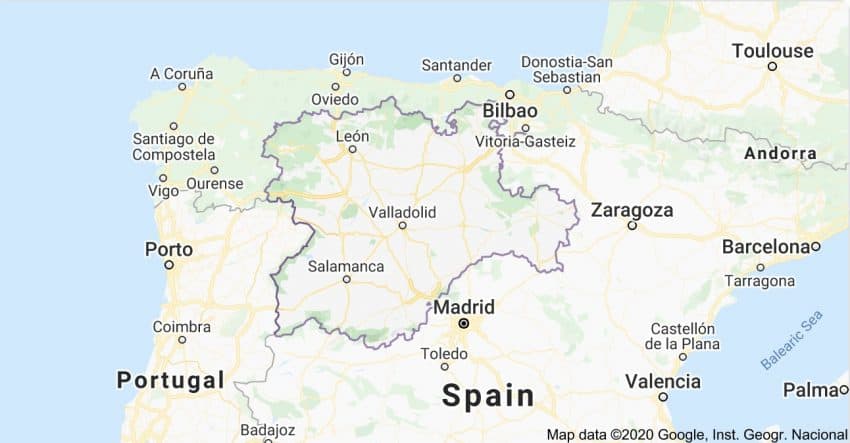 There are over 200 medieval castles and enough historic cathedrals to refresh your soul and wear your shoes out visiting them.

There is a beautiful landscape, mountains, Roman gold mines, and small-town squares to sit and pass the day away. If you are a foodie, it is a pilgrimage that must be made.

Here are some tips on what to do, where to stay, and what to eat in this must-visit region of Spain.

Just 30 mins from Madrid by high-speed AVE train, Segovia makes a great day trip or a jumping-off point for a more extended tour of the region. Most of the action is in the historic medieval city center highlighted by the monumental 2000-year-old Roman aqueduct running through the Plaza Mayor.

A UNESCO World Heritage site, the Segovia aqueduct is over 813 meters long, 28 meters high, and amazingly well preserved. It is mind-boggling that its two tiers of arches built of granite blocks were constructed without any mortar. Legend has it that it was made by the devil who lost a wager to a servant girl. It is still functioning to this day.

In the shadow of the aqueduct is the equally impressive Mesón de Cándido.

The history of this restaurant goes back three generations to “Candido the most exceptional Innkeeper of Castile” there is even a statue of him on the road entering the town.  Today his son and grandson carry on his traditions.

Beautiful dark wood beams, creaky old stairs, paintings of local traditions, it is a living culinary museum. The regional specialties served are fantastic, but it is the roast suckling pig that has won international acclaim.

21-day old pigs roasted to crispy skin perfection—tender, juicy and savory. Served with theatrical drama, tradition demands that they are carved with the edge of a ceramic plate that is thrown on the floor, smashing to bits. The original dinner theater set the tone for much feasting and the consumption of copious amounts of wine. It is Spain, after all.

While in Segovia, you must visit the medieval Alcazar de Segovia, inspiration for Disney’s Cinderella’s Palace. The massive- gothic Segovia cathedral, and I highly recommend a hot air balloon ride with Siempre en las Nubes.

About two hours (95 miles) by car from Segovia, the Plaza Mayor in Salamanca is one of the most beautiful in Spain. Built in 1755, the ornate baroque sandstone buildings emit a golden glow in the late afternoon sunlight. It is the heart of the city lined with restaurants and outdoor cafe seating.

I had lunch at Restaurante Don Mauro in the plaza, people watching while sampling delicious plates of local Iberico ham, chorizo sausage, and pasture-fed beef.

At night the plaza hums with people doing the “Tapeo,” a tapas bar-hopping tradition.

Parts of Castilla y Leon still maintain the tradition of free tapas that is disappearing in much of Spain. More often than not buying a two euro beer or a short glass of wine comes with a tasty tapa: manchego cheese red peppers and bread, grilled pork loin with mushrooms, Tortilla de patata, or my favorite, the Gilda, a Basque-inspired combination of pitted green olives, anchovies and guindilla peppers skewered on a large toothpick.

Each place has its specialty, so it’s best to try them all.

Check out the historic Mesón Cervantes for the most traditional flavor of the square. The second floor offers a full menu and window seating. The bar is frequented by locals and students, loud and fun with gigantic complimentary tapas.

While in Salamanca, visit the Universidad de Salamanca. Founded in the 1200s, it is the oldest University in Spain. Nearby is the enormous Old and New Cathedrals, conjoined after two centuries. Climbing the endless stone staircase leads you to the best view of the city.

The restored Hacienda dates back to the 1300s. In 1476 Christopher Colombus lodged here while raising funds for his great adventure that led to his journey to America.

León, a Stop on the Camino

Leon is a stop on the French way for the great Camino de Santiago attracting travelers, and pilgrims from around the world. Some walk for hundreds of miles to pay homage to the remains of apostle St. James in the Santiago de Compostela Cathedral in Galicia.

Founded by a Roman legion in the 1st century BC, the city boasts several must-see historic sites.

Check out the beautifully preserved medieval stained glass windows at the gothic Santa María de León Cathedral, the Casa Botines /Gaudi museum. At the Romanesque, Real Basílica de San Isidoro, some say that the Chalice of Doña Urraca on display is the actual Holy Grail.

I arrived during the fiestas de San Froilán, patron saint of Leon, a medieval fiesta of religious processions, food and market stalls, puppet shows, and roving groups of musicians and jugglers.

Barrio Húmedo, in the old part of the city surrounded by the original Roman city walls, is the place to be.

Stroll the winding medieval streets lined with a plethora of restaurants and tapas bars—such a great scene.

Check out the bar at Restaurante Ezequiel for a fabulous free tapa of regional cured meats and a killer local wine list, and the little Café Bar Rúa 11 for incredible crispy creamy croquetas.

For an excellent day trip from Leon, the easy way to join the hikers on the way to Galicia is by renting an Electric bicycle with La Mirada Viajera.

I also made the 1.5 hr trip by car on Route AP-71 to the UNESCO world heritage site, Las Médulas Roman gold mines near Ponferrada. Ancient Rome’s largest gold mine. You can walk in the tunnels that were bored out with the sweat of thousands of Roman laborers and millions of gallons of water that ate away the mountains, leaving a strangely beautiful landscape.

You do not have to be a wine aficionado to love Penafiel, but if you are, this is your heaven. Surrounded by thousands of hectares of vineyards, the small town with its distinct castle on the hill is the capital of the famous Ribera del Duero wine region.

Built-in the 15th century, a tour of the castle and adjoining Wine Museum is mandatory. It was one of the more informative and fun museums I have ever visited.

For a deep dive into wine production, there are numerous local wineries and vineyards to visit. I toured the vineyards and had lunch at the luxurious Abadía Retuerta Le Domaine. Both the winery and hotel/spa in a restored 12th-century monastery have won numerous international accolades.

Before leaving Peñafiel, I had to see the medieval Plaza del Coso, one of the oldest town squares in Spain, still used for an occasional bullfight.

By chance, I walked into the annual Fiesta de la Vendimia (grape harvest).  It turned out to be one of the defining moments of my travels in Spain.

Large chunks of homemade chorizo sausage, cheese, and bread were passed around. There was music, dancing, and even a sizable open barrel of grapes stomped on by barefoot women.

As I walked through the crowd, many strangers tried to give me wine and food. At first, I resisted, not wanting to crash a family event. Then I made the mistake of offering money. A man with a large knife carving a wedge of cheese wagged his finger at me in disapproval and said, “Nobody pays for anything today. Put your money away”.

He smiled, shoved a glass of wine and a hunk of bread and sausage in my hands, and we started talking. After a few more drinks, I asked him why the people in Spain were so giving to strangers. He told me, “When we offer food to a person, we are not just giving to them; we are giving to ourselves, it makes us feel human.”

These are dangerous times.  Please visit the Traveler’s Health section at the CDC website and the Practical Information for Tourists in the COVID-19 Crises at Spain.info before you make travel plans.

This story was written with the assistance of the Spanish Tourism bureau, but the opinions are the author’s own.

Paul Shoul is a Northampton, MA-based photographer who doubles as a staff writer for GoNOMAD. For thirty years he’s lived in the Pioneer Valley and chronicled life there through his work in the Valley Advocate. He’s also been seen in the Boston Globe, New York Times, BBC, the Chronicle of Higher Education and many other publications. Today as well as shooting around the world for GoNOMAD he works for local nonprofits, banks and advertising agencies.