Route 66: The Main Street of America 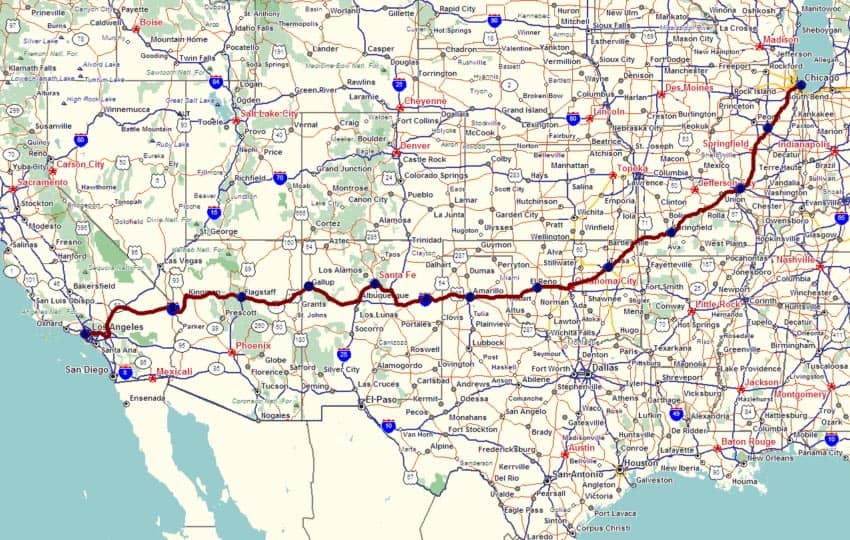 Route 66 is probably the most famous road in the world. No other stretch of asphalt has been the subject matter of so many novels, movies, songs, and television shows.

My boyfriend Claus and I have gotten on a flight to America, rented a white Chevrolet, and set out from Oklahoma City on Route 66 to Los Angeles.

To Europeans like us, the Historic Route 66 is somewhat mysterious, legendary and almost synonymous with the American way of life – the freedom and adventure of the open road. This is the real, authentic America.

Many Americans will probably remember the CBS television series “Route 66” from the early 1960s, in which two young men drive across America in a Corvette convertible.

The theme song by Nelson Riddle became a major pop hit. In fact, a long list of artists have recorded songs about the route. Bobby Troup’s (Get Your Kicks on) Route 66 from 1946 became Nat King Cole’s greatest hit. Since then Natalie Cole, Chuck Berry, Depeche Mode, Van Morrison, and Rolling Stones, among others, have recorded it

A Trip to the Past

Personally I learned about Route 66 from John Steinbeck’s novel Grapes of Wrath, in which a poor Oklahoma family is forced from their home during the Great Depression and heads to Calfornia to what they hope to be a better life, but turns out to be even more miserable. Hence the phrase: “California or Bust.”

The novel won the Pulitzer Prize and was made into a film in 1940 by John Ford. The movie won an Oscar.

So although Route 66 starts in Chicago on the shores of Lake Michigan, we seem destined to begin our journey in Oklahoma like so many before us.

Driving down America’s Main Street will be like a trip to America’s past. But first, we have to find it. That is, however, easier said than done, as it is not on any of the regular maps.

Route 66 coexists with the Interstate, and in most places, they run parallel to each other. In other places, the Interstate is built where Route 66 used to be, and dead ends, as well as “road closed” signs, are therefore not uncommon along the route. Buying a Route 66 map is a good idea if you want to save time.

The Route Refused to Die

Route 66 was built in the 1920s as part of the American expansion to the West. It was thus lovingly called America’s Mother Road. However, it soon became more than just a road. During the 1950’s it became a destination in itself with motels, restaurants, shops, and sights – some natural some manmade.

But the growing popularity also meant growing traffic, and during the 1960s and 1970s, Route 66 was gradually replaced by the Interstate, which led travelers away from the small towns.

In 1985 Route 66 was officially shut down and taken off the map. But the route refused to die. Its historic significance soon became evident to American tourists, who began to seek out the old road again. The Route 66 signs went back up once more -this time with “Historic” in front.

The small towns were given new life and some even built their own Route 66 museums. One of them is Clinton – our first stop.

The Route 66 Museum in Clinton

Clinton is a small town just outside Oklahoma City. It allegedly has the best Route 66 museum on the entire route, so we make it our first stop. Inside we are met by a world of Route 66 nostalgia — neon signs, old cars, posters, blinking lights and souvenirs one can only imagine.

Each room inside the small museum is dedicated to a decade, and walking through them you are taken through the life of the road.

We begin in the 1920s and travel through time to the present. We stop to get gas, pretend to be customers in a 1950’s diner, listen to the music of a time long gone and finish off by watching a movie. Now that we got our history down, we are ready to explore the real thing.

When we finally locate Route 66 it gives us a feeling of excitement and “Is this it?” at the same time.

For hours we drive on Route 66, and in some places what is left of it, without meeting any other cars. We are completely alone, and we begin to understand why. There is absolutely nothing to see.

A lot of the time, we drive parallel to Interstate 40 West and feel pretty idiotic watching the traffic move almost twice as fast as us because of the higher speed limit.

Where are all the old gas stations, convenient stores, diners serving creamy milkshakes and burgers, classic old cars, souvenir shops, and motels? We are disappointed and decide to take the Interstate to Amarillo, Texas.

In Amarillo, we stop at the Big Texan Steak Ranch – an old Route 66 locality now facing the Interstate – home of the 72-ounce steak!

The deal is that if you eat the steak, a salad, a roll, a shrimp salad, and a baked potato in just one hour you get the meal for free. Otherwise, you pay.

Claus has announced that he will eat it. However, the sight of the steak, which is on display and almost the size of our heads, and the thought of sitting on stage while hundreds of other guests cheer him on, gives him cold feet.

Instead, we order a smaller steak, which is delicious. The desserts are the biggest we have ever seen, and the menu card reads that one dessert will serve four ordinary folks or one hungry Texan. We love Texas already.

John Wayne is a fashion icon here. The staff members, as well as the guests, are wearing cowboy clothes, boots, and hats.

The gift shop has a live rattlesnake, and our waitress tells us that real Texans eat eggs and steaks for breakfast. We feel like we are in an old western movie, just waiting for Billy the Kid to walk through the door.

After a good night’s sleep and a detour to Palo Duro Canyon – Texas’ best-kept secret – we continue to one of the most famous and strangest sights along Route 66, the Cadillac Ranch.

On a field west of Amarillo, ten Cadillacs have been half buried in the ground with their noses in the dirt – apparently as a celebration of the freedom of the open road. The cars have been spray-painted in all the colors of the rainbow and if you bring paint, you can leave your own mark on the artwork.

In New Mexico, we take a detour to Santa Fe, but make a stop at the El Rancho Hotel in Gallup in the Indian heartland. The hotel was built in the 1930s and every room is named after a different movie star, Ronald Regan and Doris Day among others.

The Eastern part of the state is a smorgasbord of natural wonders, like The Petrified Forest, The Painted Desert and Route 66’s very own meteor crater. It is a beautiful stretch that should be devoted a lot of time.

Central Arizona is a true haven of Route 66 memorabilia. We stop at The Wigwam Motel in Holbrook, the Jack Rabbit Trading Post, the Twin Arrows, before we get to Williams – a Route 66 stronghold and the first pearl on a string of authentic Route 66 towns.

It is as if time has stood still in Williams. A walk down its main street is a walk down memory lane – if you remember the 1950’s and 1960’s that is. We do not, but it is still fun.

We feel like we are walking around in a living, breathing museum. Old saloons, ice cream and soda shops, Route 66 neon signs in the shop windows, classic old Americana cars parked out front, Route 66 artwork and murals everywhere, and a diner that is open!

We walk in and are asked to wait to be seated by a life-size cartoon figure of Betty Boop herself. We get a booth and order coffee and a milkshake – with a cherry on top.

The jukebox is playing, the old men are reading their newspapers at the counter, another life-size cartoon figure of James Dean shows you the way to the restrooms, and even the curtains have Route 66 written on them.

We are not sure whether this is all real or whether it is a show for tourists. Whatever it is, we are entertained and loving it.

From Williams, we continue west on Route 66 through Seligman to another small town called Kingman. This stretch of Route 66 is, without doubt, the best part we have seen.

On the way, we pass a Route 66 celebrity, The Hackberry General Store, which is not to be missed. It is an old gas station and store that has been kept almost exactly as it was before the Interstate was built. Even some of the things on sale are from that time.

Inside is a map, on which people from all over the world have put up bills in all kinds of currencies. We even find some from home.

Out back Claus has discovered a load of old cars. They are nothing compared to the red Corvette convertible parked out front though, just like in the television series. We both agree that the Grand Canyon State should be renamed Route 66 State.

300 Miles of Desert Ahead

After a detour to Las Vegas, we are back on Route 66 in California. We find ourselves in the middle of the Mojave Desert.

We have never been to a desert before, and it is hot, so we stay in our air-conditioned Chevy most of the time. In the end, we decide to skip some of the sights and take the Interstate to Los Angeles.

Driving in LA is not amusing, quite the opposite. We have never seen so many tracks on one road before, and of course, we hit rush hour.

But once we reach Santa Monica Pier and feel the gentle breeze of the Pacific Ocean on our faces, it all seems unimportant. This is where the route ends, and this is where our journey ends.

We certainly got our kicks on Route 66.

Set your Author Custom HTML Tab Content on your Profile page
If this story has inspired you to travel, why not check out the prices to get there and make it happen? Search airfares, hotels, and rental cars here. Thanks!