Florence is one of the cities on nearly every American’s Italy bucket list.  The city is famed for being the home of the Uffizi Gallery, and the famous Duomo in the crowded city center never loses its luster.

Visiting Florence is seeing the beauty of urban Italy on full display, from the chic jewelry shops of the Ponte Vecchio to the great square filled with cafes and vacationers.

After you have discovered the secret of taking a private tour of the Duomo Florence, and enjoyed coffee and people watching, you might want to spend some time out in the Tuscan countryside.

Here are some ideas for day trips from Florence that you’ll never forget.

Lucca is about an hour away from Florence, the completely walled circular city center is remarkable.  It is also quite popular with tourists, but if you can time your visit during the week, it is manageable for sure.

You enter Lucca through eight tremendous gates, which have withstood invaders for centuries.

The famous Renaissance-era walls are much younger than the city itself, which dates back to the Etruscans.  Around 180 BC Lucca became a Roman colony.  Today’s Piazza San Michele is located at the site of the former Roman forum.

Lucca is on the Serchio river, in Tuscany, it has a population of around 90,000, but the number of tourists far outnumber residents.

Though the famous circular walls were built for military purposes, over the centuries they became more important as the Passeggiata delle Mura Urbane, a walking path atop the fortifications. Today a highlight of any day trip is a stroll on top of the walls.

Growing on the circle of walls are centuries-old trees which, since the beginning, were planted to consolidate the enormous mass of earth.

In the 19th century, Duchess Maria Luisa of Bourbon commissioned the royal architect Lorenzo Nottolini to arrange the walls definitively as a public walkway.

Pisa, the City of the Leaning Tower 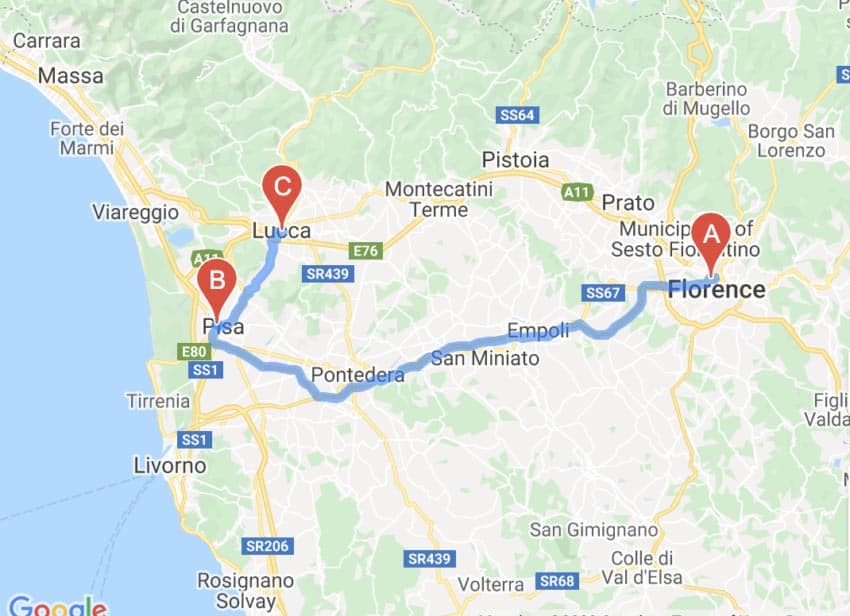 OK,  yeah it’s kind of a one-trick pony, but the small city of Pisa still merits a stop on a day trip from Florence. You gotta get the selfie holding up the tower!

Ciao Florence combines the two destinations of Pisa and Lucca in their nine-hour tour by car.  The tour starts in the incredible Piazza dei Miracoli, where you can admire the Baptistery and the famous Leaning Tower, together with a guided visit of the majestic Cathedral in Pisa.

Pisa is another ancient city on a river, The Arno, and it’s bigger than Lucca with more than the famed leaning tower for you to see.

Twenty historic churches, Medieval palaces and ornate bridges across the Arno among them.

Assisi is famous for its religious heritage in Umbria, another ancient town that dates back to BC.  Roman remains can still be found in Assisi: city walls, the forum (now Piazza del Comune), a theatre, an amphitheater and the Temple of Minerva, which has been transformed into the Church of Santa Maria Sopra Minerva.

Francesco di Bernardone, or Saint Francis of Assisi, was taken prisoner here, before he renounced all wealth and lived a vow of poverty and founded the religious order. His disciples, the Franciscans, make pilgrimages to the basilica built in his name.

Despite the effects of a devastating earthquake in 1997 that damaged many historic sites, the beloved cathedral Basilica di San Francesco remained undamaged. Today this giant edifice is a UNESCO World Heritage site, along with other historic buildings in Assisi.

While many of the cobblestoned lanes lead to the marvelous basilica, the cathedral of San Rufino, the basilica of Santa Chiara, and the Chiesa Nuova are also worth a visit.

Assisi is a must-see for any traveler interested in religious history and ornate architecture. Take one long look at the tremendous Basilica and you’ll know why.

You can rent a car in Florence, and drive to Assisi, it’s about 2 1/2 hours and you’ll drive right through Perugia, a scenic and enjoyable stop en route.

Assisi is a small town, only 25,000 residents, and there are many gelato shops if it’s a hot day when you visit.

Siena is famous around the world for a 95-second horse race that takes place in its small-town square.  Il Palio fills up the Piazza del Campo,  there is barely room for the ponies to race. But do they race!? 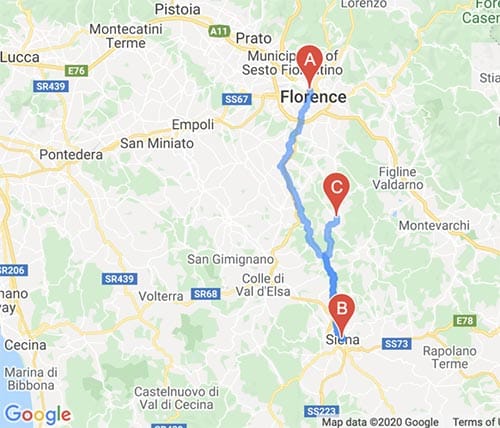 If you want to visit Siena, you can drive yourself or you can join a group of fellow travelers and enjoy tasting local Chianti and dinner.

This half-day tour starts after lunch and includes an hour drive through the scenic Chianti wine-growing region. There will be time to walk the narrow historic streets of Siena and then you’ll be taken to a winery where the winemakers will have a wine tasting and a wine-fueled dinner

Find out more about the wide selection of day trips, guided tours and other travel from Ciao Florence.