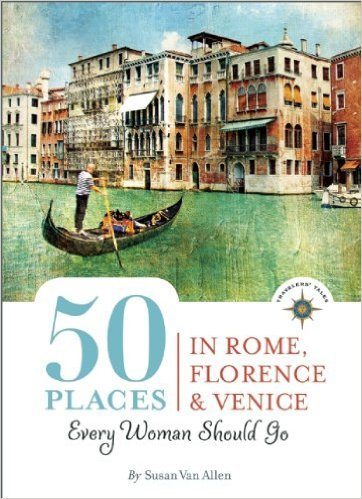 Florence: Visiting the Home of a Storied English Poet

Susan Van Allen, author and Italy expert, follows up her bestselling book, “100 Places in Italy Every Woman Should Go” with this new, innovative guide which leads female travelers to discover the best of Italy’s Big Three. Like a savvy traveler girlfriend whispering in your ear, Van Allen guides readers to masterpieces where women are glorified, best spots for wine tastings, artisan shopping experiences, and places for immersion adventures—from rolling pasta to rowing like a gondolier. 50 Places in Rome, Florence, and Venice Every Woman Should Go also includes places where women lived and flourished, as in the excerpt below, about the famous author.

When we think of “How do I love thee, Let me count the ways,” Elizabeth Barrett Browning’s most famous line, it seems only natural that this romantic poet would wind up in Italy. It was more that brought her to Florence, where she lived for fourteen years with her husband Robert Browning. Stop by their former Oltrarno apartment to get a hit of what life was like for these bohemians back in the nineteenth century.

When Barrett met Browning in London, she was thirty-eight and at an all-time low. Her poetry books were a smash, but she was a semi-invalid with lung problems that began with a spinal injury she got as a teenager and left her dependent on opium for the rest of her life. And she was in mourning for her beloved brother. He’d gone with her to a lovely lakeside spot to help restore her health and then tragically drowned in that lake.

In swooped poet-on-the-rise Robert Browning, who wrote her a fan letter that began, “I love your verses with all my heart…” It was a little too over the top for Elizabeth, but the two started writing to each other and after a few months Robert showed up at her father’s house, where she was living as a recluse.

Robert was six years younger than Elizabeth, a strapping, healthy guy, and it was hard for her to even imagine he could love her. Elizabeth’s wealthy, tyrannical father was dead set against any of his twelve children couplings, but after their first meeting, a secret romance between Elizabeth and Robert began.

A year later, in 1846, they eloped, and Robert whisked Elizabeth off to Italy for their honeymoon, along with her nurse and cocker spaniel. Elizabeth described it as “living a dream.” After toodling around, they found this gem of a six-room apartment in Florence. They bargained with the landlord, giving him back the grand furniture the place came with, and getting the rent down to twenty-five guineas a year, which included free entrance to the nearby Boboli Gardens.

The apartment is on the piano nobile (what we think of as the second floor) of this fifteenth-century palazzo, once owned by Count Guidi. You pass through a big dining room to get to the main attraction: the drawing-room where Elizabeth wrote and hung out with artists and writers like the Hawthornes and Harriet Beecher Stowe. Thanks to an oil painting Robert had done, the room looks almost exactly as it was when the Barrett-Brownings lived here.

It has a cozy Victorian style, with intense olive green walls, soft lighting, velvet upholstered furniture, and a little table with a mother of pearl tea set. In the middle of it all is a tiny writing desk where you can imagine Elizabeth composing Aurora Leigh—a love story of a woman writer making her way in the world.

The gilt-framed mirror over the fireplace is the one piece that’s original to Casa Guidi. Elizabeth wrote to her sister about how thrilled she was Robert bought it, even though to her the five-pound price was an extravagance.

Elizabeth got her strength back in Florence. At forty-three she gave birth to a son, whom she nicknamed Pen. She got passionately involved with the Italian fight for independence and wrote the poem “Casa Guidi Windows” in support of the Florentines she saw from her terrace, who protested fiercely against Austrian occupation. 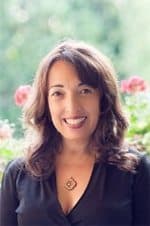 Susan Van Allen Though most biographies claim “they lived happily ever after,” Elizabeth and Robert were real people, so it wasn’t a fifteen-year honeymoon. Elizabeth was the poet star of the duo, paying all the bills for the house and many wonderful vacations, with her writing profits and money she’d inherited from an uncle.

She got her way when it came to dressing Pen, outfitting him in effeminate velvet getups and having his hair grow in long curls like his mommy’s. Robert didn’t stand behind Elizabeth’s passions—feminism, the fight for Italian unification, and most of all her explorations into spirituality, which involved consulting mediums. Add to that her four miscarriages and opium addiction to give some shadings to the “happily ever after” story.

A photograph of Elizabeth just months before her death shows her dressed in billowing black silk, with that signature cascade of curls surrounding a face that looks pained and cadaverous. The story goes she died in Robert’s arms in 1861 in Casa Guidi, at the age of fifty-five. Some suspect Robert may have upped the dose of morphine to put an end to her suffering.

Robert left Florence after Elizabeth died and never returned. In England, he finally reached his success as a poet. In Elizabeth’s memory (no mention of Robert), the Florentines placed a plaque over the doorway of the Casa Guidi apartment building, honoring her for poetry they said “made a golden ring between Italy and England.”

Susan Van Allen’s tip: The attached rooms of the Barrett-Browning place that aren’t being used for a museum have been turned into a vacation apartment, so you can sleep where the Brownings slept. It’s three bedrooms, three bathrooms, and kitchen. www.landmarktrust.org.uk

Buy this book on Amazon: 50 Places in Rome, Florence, and Venice Every Woman Should Go 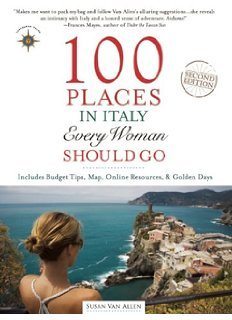 Susan Van Allen is writer and tour leader who lives in Hollywood, California. Find out more about Susan Van Allen’s books and Women Only Tours to Italy: www.susanvanallen.com.

NOTE: Susan has updated this wonderful guide to 100 Places in Italy Every Woman Should Go!