Bolivia’s Blessing of the Cars 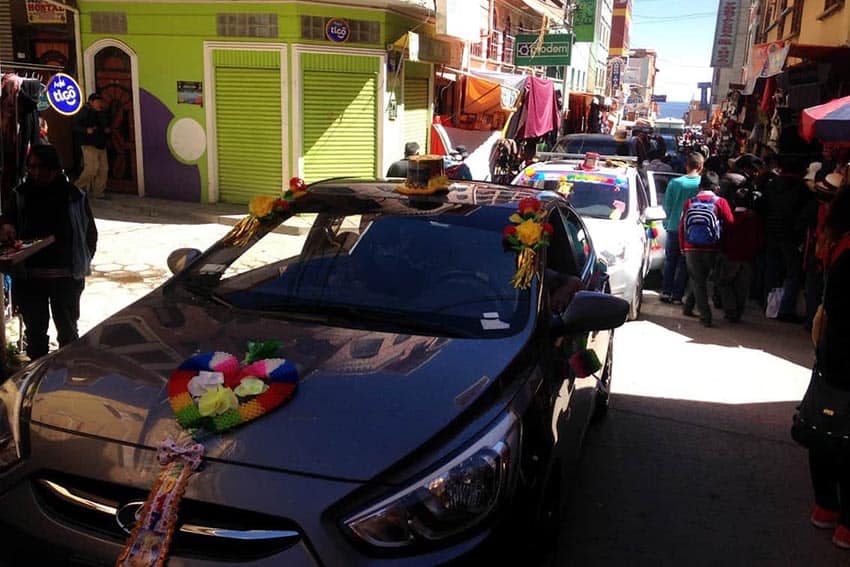 An endless pilgrimage drives to Copacabana, Bolivia to leave with God behind the wheel.

Champagne, vehicles covered in pom poms, and a white-robed priest: anywhere else you’d expect a wedding but not in Copacabana, Bolivia.

Nowhere on Earth will you find a rare Catholic ceremony so frequently, and enthusiastically, performed.

I stepped off the boat from the tranquil islands on Lake Titicaca. “Despacito” blasted from the patios of bars decorated with flamingos, pineapples, and never-ending happy hours.

“No, gracias,” I dodged another tour operator.

Copacabana, Bolivia, while often confused with the hottest spot North of Havana, is a hotspot itself — a hotspot for tourists on Lake Titicaca.

I shifted my backpack to navigate the tightly-packed hill from the beach to the plaza. Shops spilled over into the streets selling ponchos, sarongs, and llama toys.

The promise of shade from their striped awnings drew me up the street. Glowing panel signs for hostels hung off of antique Spanish arches and gated windows.

I’m glad my bus is soon. I’d never found much to enjoy in touristic towns. I always looked for something more genuine, unique, and local. It didn’t seem like I’d find that here.

As I walked up the cobblestones towards the plaza, a car drove by adorned with pom poms.

Waving hands and smiling faces cheered from the back seat.

A wedding! I clapped and yelled with them. Suddenly car after car, decorated with streamers and even hats, were passing by. My nose crinkled. The air smelled unmistakably of sulphur, which was odd as there were no hot springs nearby. It was also midday, not a time for fireworks.

“Oye!” Watch out! An elderly shopkeeper grabbed my arm and pulled me out of the way.

What was going on?

“Ehhhhhh!” Cheering and crackling spread out from the plaza. I sped up lured by chaos and curiosity. The towers of the Catholic Basilica glowed saintly white against the rich blue sky. It took up several city blocks.  I’d found where the cars had gone.

Two rows of parked vehicles were decked out in garlands, hats, rosaries, and fluffy pom poms. They had lined up beside the church in their Sunday best, despite the fact it was Friday. More pulled in behind them, and began blocking the entire road down to the beach.

I must have stumbled across a major wedding!

I smiled wider as I imagined encountering Bolivian celebrities. What would they be like? Who were they? It would be a great story.

“No, no. Benediciones,” they handed around sparklers. Blessings? Perhaps this was a baptism then? I wasn’t sure how to ask so I circled the square to see for myself.

A brown-robed Franciscan monk stood out from the crowd. He shook hands with families, and then placed a hand gently on top of each member’s head. Crackle pop pop. Firecrackers scuttled out from under a car. The monk shuffled away just in time, laughing.

No one seemed very serious. Why were people throwing firecrackers at monks?

Groups of families covered the square. Women dressed in both traditional layered skirts and bowler hats, as well as modern formal wear, greeted one another with a cheek kiss. Two worlds were celebrating together. What? I didn’t yet know. I reached the front of the caravan.

A priest draped in long white habit was smiling and dipping fluorescent, plastic flowers into a bucket. He flicked the holy water onto people, under the car hood, and then went around to each open door. I watched as he sprinkled water onto the upholstery.

It’s like a baptism, for cars. As the priest moved to the next in line, the family struggled to open the bottle of sparkling wine they had brought.

A man raced around the car, drenching the side paneling with bubbly. A woman followed casting yellow confetti onto the liquid, a color representing luck to locals and connected to nearby Isla del Sol, Island of the Sun. The paper bits stuck to the champagne leaving a cheerful racing stripe.

Hahahaha! I heard laughter behind me and turned just in time to catch teenagers lighting a string of firecrackers.

They tossed them under the car and bolted away. Along with a photographer, I plugged my ears and scrambled to the sidelines in the nick of time.

It was all a bit overwhelming in the hot, high altitude sun. Now that I’d seen it, I still had no idea what was happening.

I stepped into a cafe for refuge. Coffee always helped clear things up. “Hey, how’s it going?” An American accent surprised me.

“I haven’t been hit by firecrackers yet!” I smiled back.

“Haha you like the car blessings? We see them every weekend, sometimes during the week,” the man said.

“Catholic holidays are the craziest, everyone has the time off and comes here.”

The owner Jeff and his wife Deb had been missionaries. They’d become part of the community and now spent their time working to support local projects.

“People come from all over to have their cars blessed here. It’s not just Catholics either. This place is significant to Aymara and Quechua people.”

During colonization, the Spanish built churches on top of indigenous sacred shrines. This forced those who wanted to visit their own holy sites to come to the Catholic church. It also sent a statement: that a new religion was replacing the old. Yet, inside this Basilica are remnants of the old shrines. They were kept and not destroyed.

“The Virgin of Copacabana is Bolivia’s patron saint. They attribute her to winning independence.” Her statue is housed in the church hall and was carved by a Quechua artist who studied under European master sculptors.

The Virgin wears the robes of an Inca (Quechua) princess. Copacabana seems to bridge these two worlds.

“Crowds arrive from as far as Brazil, Peru, and Columbia,” Jeff explained. In vehicular pilgrimage, families road-trip to the shores of Lake Titicaca to be touched by the Virgin’s miracles.

“Car blessings first appeared in the 1960s, in the journal of Catholic rituals,” he continued. The blessing was intended for any object. Cars being such a major, and hazardous, part of life meant that blessing them made sense.

Perhaps it keeps the roads a bit safer, too. I hoped. I thank Jeff for the insight and caffeine. Back in the plaza, I take a final lap past the stalls that encircle the square. Spinning dials, rosaries, pom poms, and streamers are for sale.

If you lost your decorations on the route, you can deck out your car on arrival. Cars now block all of the roads and the priest moves from family to family. He crosses the air in front of the engine. He mumbles the same phrases in Spanish over and over again.

One family shakes up a beer bottle, another a bottle of Coke. Car blessings take on the tastes, budgets, and personality of each group. Some women with thick, black double-braids stand in silence beside their van with heads bowed.

Another group has clearly sampled their holy beers and is dancing around a car.

Speaking of dancing, where did that catchy Barry Manilow song come from?

At the Copa, Copacabana…

The whole world can’t get it out of their heads. Copacabana translates to “view of the lake” in Aymara. The town was named simply for its location on sacred Lake Titicaca.

Later, Brazilian sailors claimed they were saved from a storm after viewing the Virgin’s statue here. Brazil’s famous Copacabana beach was named in honor of this miracle.

It didn’t take long for New York nightclub to snatch up the catchy name associated with an exotic destination and wild celebrations, like Carnival. The club became so popular that Barry Manilow sang about it.

Bolivia claims the title of the original Copacabana. It might not be The hottest spot north of Havana, but it’s certainly is the hottest spot for something: car blessings. I’m curious as I step onto the bus.

Has it, too, met the priest?

Now, I wish I had more time here. Who thought that in a tourist town, I’d leave feeling so blessed.

How to see a Car Blessing in Bolivia?

When to go? Year-round. Car blessings occur most often on weekends.

Where to go? Copacabana, Bolivia on the shores of Lake Titicaca. Regular buses leave from Cusco and Puno, Peru, and La Paz, Bolivia.

Cost? Free. It’s an open event in front of the Copacabana Basilica in the main plaza. 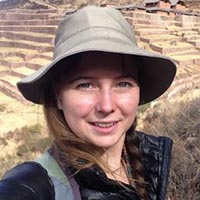 Ashley Lockyer is an adventurer, storyteller, and freelance travel writer who lived in South America for years. She explores the healing connection of travel and curiosity on Instagram @WonderTherapy.