Adventure is all around you in Bolivia’s Pampas

Bolivia: Anacondas, Piranhas and Crocs in the Pampas

Feel like pulling an anaconda out of a tree? How about fishing for piranhas, and then feeding them to wild crocodiles? How about getting woken up by growling howler monkeys dancing on your tin roof? If you’re a fan of searching for wildlife and making shockingly bad decisions, then a trip to the Bolivian Pampas is what you’ve been searching for.

Set in northern Bolivia, the area known as the “Pampas” is a plain of wide open grasslands that stretches out like a massive African savannah. Sitting on the brink of the ecologically diverse Madidi National Park and part of the greater Amazon basin, the Bolivian Pampas is one of the best places to get up close and personal with some of the unique wildlife of the region.

Virtually all Pampas trips depart from the riverside town of Rurrenabaque, which is reachable from the capital city of La Paz by either a three-day boat ride down a river, a 20 hour bus ride down one of the most dangerous roads in the world (in dry weather), or by way of a short 40 minute flight on 19 seater aircraft with open cockpits that navigate through narrow mountain passes and land on a grass runway covered with livestock.

Pick your poison basically. Though it sounds sketchy, the flights are actually remarkably safe and are operated by either Amaszonas or TAM airlines with flights daily to La Paz.
Set on the banks of the Beni river, Rurrenabaque is a slightly charming but mostly dingy riverside town where the two largest daily activities include profuse sweating and attempting to not contract malaria.

It’s the type of place where you sleep on top of your sheets and hope that the fumes from the bug spray wafting from your body somehow help you sleep through the humid night.

Abysmal climate and conditions aside, Rurrenabaque is the undisputed epicenter of the region and is where all Pampas and Jungle tours (into Madidi National Park) gather and depart from.

We chose to go with Indigena Tours, who actually did a fairly decent job, but the facilities are basic and can be considered rustic at best. It’s all part of the experience.

To reach the Pampas from Rurrenabaque you first must drive 3 hours down an incredibly dusty road to the town of Santa Rosa. After lunch it’s into a dugout canoe with an outboard engine and another 3 hours of motoring up the river, all the while keeping an eye out for all of the wildlife that comes down to escape the hot Bolivian sun.

The most common creatures to view along the river are families of river turtles sunning themselves on a log, herds of curious looking capybaras (which are the largest creature in the rat family and about the size of a black bear), and scores of fierce looking alligators and black caimans who lurk in the muddy waters and sun themselves on the dusty shores.

At the beginning of the ride having an 8 ft. alligator lurking next to you while sitting in a basic dugout canoe is slightly disconcerting, especially when you periodically need to get out and push the canoe because you’ve run aground in the exceptionally shallow waters.

Did I mention there were piranhas in the river too? After surviving the journey up the river it’s off to the company ecolodge (basic wooden huts elevated off of the ground with mosquito nets and refreshingly cold showers), and maybe even an overpriced beer at sunset while looking over the muddy river and endless plains of grass.

You may need that beer for some liquid courage of what lurks after dark. After dinner in the basic wooden dining room (where much care has been take to erect mosquito nets on the windows yet the building is constructed of planks with uncovered 4 inch gaps between the wood), it’s back into the canoe to float down the river and search for black caimans lurking in the night.

Just make sure watch out for the bats. That’s right. Every night swarms of bats emerge from the hollow trees to divebomb unsuspecting tourists and perhaps the occasional moth or spider. There’s really nothing like getting buzzed by bloodthirsty bats while the glowing eyes of a 10 ft. long black caiman peer out at you from the pitch black dark. Welcome to the Pampas!

In the jungle the sun doesn’t wake you up—the howler monkeys do. Somehow creating a sound that can only be described as everyone on planet Earth simultaneously belching into a megaphone, our guide would later inform us that the horrendous serenade was the sound of the monkeys announcing the arrival of the impending rain. It would be 2 days before the rain arrived, but the concept was still moderately intriguing.

Howlers and thunderstorms aside, the main purpose of our second day in the Pampas was to go out hiking through the grasslands in search of burrowing anacondas. The anacondas here aren’t the 30 ft. beasts that inhabit the dense jungles of Brazil, but they can still reach anywhere from 10-15 ft, which is large enough for me.

While at the outset we were only able to find dead ones lying about the grass, eventually we located one curled inside of a hollowed out tree trunk. What’s the only logical thing to do when you find a massive anaconda sleeping inside of a dark knot in a tree?

Reach your arm in to the elbow and try to pull it out! Yes, that’s exactly what our guides decided the best course of action would be, and the next thing you know there are two grown men fiercely pulling on the tail of a slithering anaconda attempting to get it to emerge from its dank and dirty chamber.

After the anaconda it was off to the lake to search for big black caimans. Sure enough, right when we arrived at the lake a 10 ft. long black caiman (crocodile) was lurking along the shoreline. Given the situation, it was time for a quick decision. Do we:

A: Admire it from a distance and give it its space. Or

B: Find its nest, remove the eggs, pick them up, and rub them together in front of the mama caiman to provoke a potentially violent confrontation.

Well, our guides felt that Option B was a better use of our time, and that is how we spent the next 20 minutes on a lakeshore in central Bolivia outwardly hoping to not get a limb bitten off. Again, welcome to the Pampas.

After the anaconda yanking and the caiman provoking, the only logical next step was to eat lunch and go fishing for piranhas. For anyone who has never fished for bloodthirsty river fish before, apparently the way to test if there are piranhas in the water is to toss a small piece of bloody meat into the river, and if it immediately disappears in a flurry of splashes you’ve found your fishing hole.

We found ours on a shaded river bend, and it wasn’t five minutes before our remedial fishing poles of simple hooks on the end of a stray line were pulling fish skyward and piranhas were flopping wildly across the deck of the tippy canoe. For the record, there are certain events in life that seem perfectly safe, and then there are those where you find yourself saying “I immediately regret this decision.”

Seven people standing up in a narrow canoe, doing their best to not tip everyone into the water where you have bloody pieces of meat dangling into piranha infested waters definitely falls into the latter category.

10 piranhas later and all our fingers and toes still attached (our guide had lost the tip of his pinkie finger), it was back to pushing the canoe through the shallow sections (piranhas!), dodging the divebombing bats, avoiding the malaria infused mosquitoes, and of course attempting to sleep through the howler monkey’s guttural serenade.

The itinerary will tell you that you are swimming with pink river dolphins. Technically, this is true. There are in fact fresh water river dolphins that live in the deeper parts of the river, where they actually get stuck during the dry season due to shallow water on each side of them.

The reality is that there are probably only 2 dolphins (which are definitely pink), and they only appear briefly to breathe every 10 minutes or so and then duck back beneath the muddy curtain of water.

What really happens during the dolphin swimming session is attempting to not get eaten by an alligator. The water is deep enough that your feet can’t touch, and there are a fair amount of alligators lurking down below.

For those who want to stay on land, there is a good chance that the guides will find a caiman that is on shore and taunt it by slapping it on the snout with a dead piranha from the day before. After a minute or so of teasing the toothy beast, the guide will eventually toss the fish into the powerful jaws and watch it disappear into the leathery beast.

Then it’s your turn to do the same. Rumor has it that in 2009 there were two backpackers who had hands bitten off feeding fish to the caimans. Yet the practice continues. Again, welcome to the Pampas.

Weary from 60 odd hours of making shockingly bad decisions, the ride home is a two-hour motor down the river, back into a crammed Land Cruiser, and then a shockingly dangerous drive down a dusty dirt road back to Rurrenabaque.

With the drivers routinely being blinded by the clouds of dust being kicked up by the cars in front of them, the accepted solution is to pass the car on either the left or the right—whichever one the driver fancies—and proceed for a good 10 seconds at top speed through an impenetrable cloud of dust where oncoming traffic is seemingly little more than a casual bother.

There’s a chance that your driver may attempt to pass an 18 wheel propane truck, get lost in the dust cloud, and and up partially underneath the truck while both are still in full motion. Ours did.

Finally back in Rurrenabaque alive and hopefully packing no blood borne pathogens, it would be a massive thunderstorm and an eight-hour delayed flight later until we threaded the Andes once again en route to landing safely in La Paz. A whirlwind of four days to be sure, I highly recommend the journey to anyone in need of an adventure rush…if you dare.
Love California? Get our California Plane Reader with dozens of stories for your Kindle, iPad or Nook. 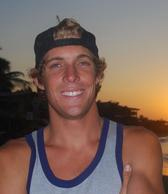 Kyle Ellison is a freelance writer based in Maui, Hawaii. His writing has been published in AOL Travel, Gadling and AAA Journey. So far he’s been to 45 countries and 49 US states.