Bolivia: Biking the ‘Death Road’ in the Andes

Sitting on the edge of the road, legs hanging over the side, feet just above a ledge of rock and mysterious plants, I regrouped, gazing at a canyon thousands of meters below that grew thousands of meters above. It was spread in thick, Amazonian foliage. Thin streams of waterfalls spouted from troughs of earth concealed by greenery. Opaque fog hid the tips of mountains. A thin, grey line wound its way through the flourishing rainforest, a serpentine reminder of how much more of “Death Road” I had to conquer.

It had begun innocently, a neatly paved stretch of highway, me the frontrunner, almost forty and out-clocking the group of twenty-somethings by a respectable distance. As I cruised along Yungas Road, I considered its dramatic renaming and decided it was simply a clever marketing ploy to make a few bucks off of tourists. The road was constructed in the 1930’s by Paraguayan prisoners of war; I assumed the shoddy workmanship had been improved. It was my first time on a mountain bike and would be nice enough to learn how to ride one and get a bit of exercise.

A Quick Look Around?

La Paz is as crowded and busy as one would expect from a capital city. It is largely populated by one of the country’s indigenous peoples, the Quechua. The traditional women wore long skirts, full with layers of petticoats buried beneath. They were cloaked in shawls, blankets tied around their necks to carry wares for sale, or across their bodies to swaddle babies. These women were completely shrouded in beautiful, brightly colored clothing, a contrast to the infrequent, conservative smile.

There was always a hat. There were bowler hats, stovepipe hats, prairie bonnets, straw sombreros, anything to cover heads, two dark braids falling the length of their backs and fastened with black tassels. I noticed that, though the men didn’t typically dress in traditional attire, they were always completely covered, long pants, close-toed shoes, sweaters, jackets, and a hat.

The highest capital city in the world, 3640 meters, regularly left me heaving for breath, the air so thin it was a mere wisp of oxygen. My ventures to purchase homemade empanadas from the Quechua women lining the sidewalks were difficult. An enthusiastic walk through the steep streets quickly slowed to a stroll during the first few days until my body had acclimated to the altitude. Those days of sightseeing would prove of paramount importance.

An Uncomfortable and Nostalgic Hostel

The morning of my tour, I left the party hostel I accidentally booked myself into, a place that made me equal parts uncomfortable and nostalgic. Amidst the drunken chaos was constant talk of an experience I initially dismissed. I was eventually talked into it during an intense game of beer pong, cringing at my opponent’s devil-may-care use of the word “rad”. It would prove to be the most memorable adventure during my travels in Bolivia.

We started in La Cumbre, a tiny pueblo about an hour outside of La Paz in the Yungas region that lay 4670 meters high in the middle of the Bolivian Amazon. At this altitude, the tour group was bundled in layers of long-sleeved tees and sweatshirts. Our windbreakers, pants, elbow and knee padding, and helmets were supplied by “Ride On”, the tour company that would lead us down the road.

Our destination was the pueblo, Coroico, at 1230 meters. There were other small towns along the way, Unduavi, Cotapata, Yolosa, but I never saw evidence of them, save one crumbling home with an elderly man standing outside, holding the reigns of an, even more, elderly horse. I was just getting comfortable on the bike as we stopped to one side of the freeway for a break. Our guide, Ricardo, pointed to a stretch of thin gravel on the other side of the curb, curving around the tunnel I thought we were about to pass through and said, “That’s the beginning of “Death Road”. 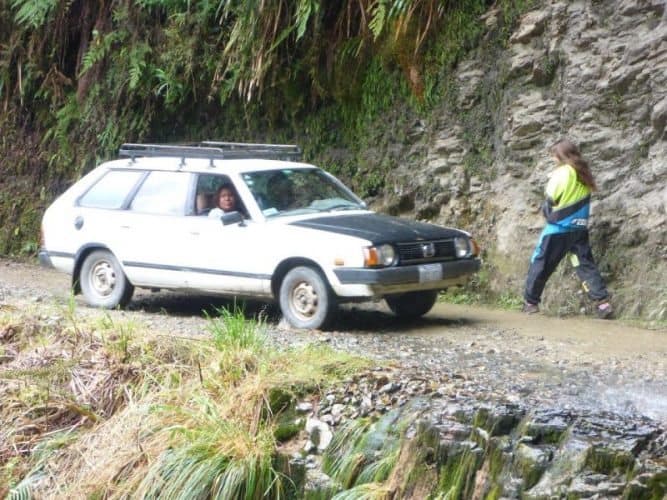 The Effects of Inexperience

The joint and tissue between my thumb and forefinger were now aching from an hour of squeezing the brake, lower back burning from hunching over, bottom bruised from the impact of every pothole and rock mound. My clothing was wet from not having removed layers as I dropped altitude.
I had rapidly fallen from pack leader to almost-forty-and-out-of-shape.

The rest of the group had flown past me, jumping their bikes over piles of rock and cheering as they sped through waterfalls. I was diligent, moving the pedals around just quickly enough to continue forward motion. 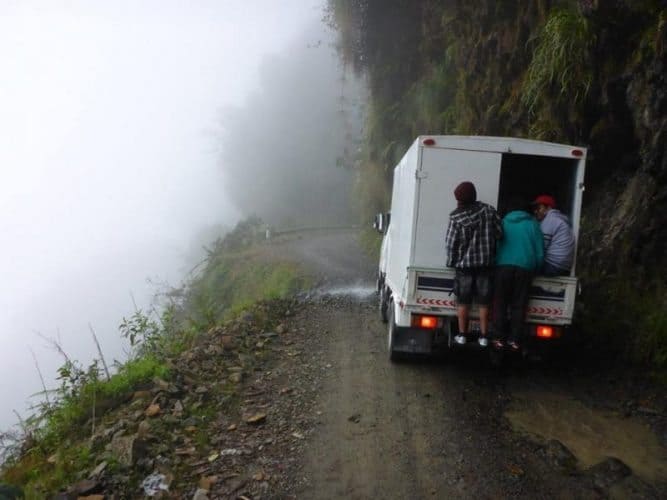 However, no cheers were erupting from my mouth. Some profanity seeped out, quietly enough so that it was kept to myself, loudly enough to provide me some relief. At the rest stops, I managed a few forced smiles as I chatted with the others, all the while daydreaming about ibuprofen.

How Death Road Got Its Name

Having slowed so much compared to the others, the guide following at the back of the group had become my personal assistant. Luis called out words of encouragement as I struggled around the curves.

At one point he called, “left!” and I pulled the bike to a stop at the outer edge, as we had been instructed to do at the beginning of the tour. A truck filled with locals from the surrounding pueblos passed.

This is where it happens. This is how it got its name. This is why almost 250 people die on this road every year.

Safety railings have been constructed, drainage systems installed, everyone encouraged to carry smaller loads on their trucks, fewer passengers, drive more slowly in rain and fog, take more care on the tight turns so as not to shift balance to a fatal fall.

It is referred to as “Death Road”, some call it “The Most Dangerous Road in the World”, “38 kilometers of bad road.” 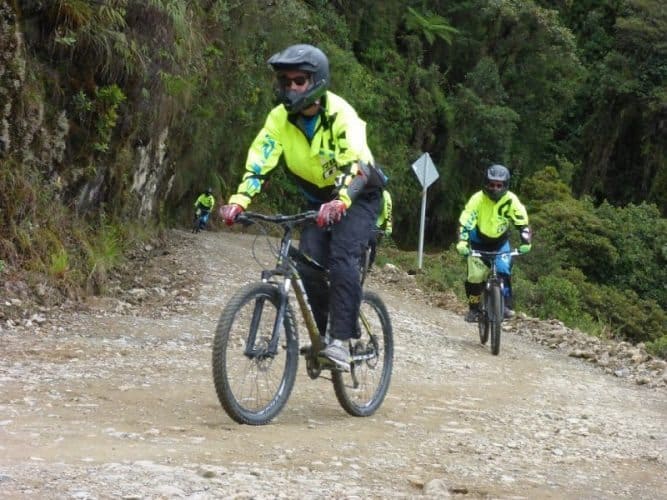 . Luis saw the drawn look on my face and delicately said,
“You can go in the van the rest of the way”, referring to the vehicle that had been following us along the road, an option for those who decide the tour isn’t quite for them.
“I’m not going in the van”, I said with a determination that came from a place I have yet to identify. 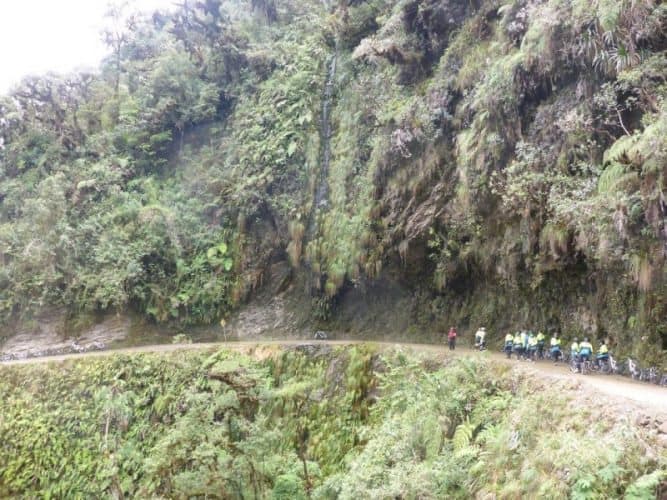 A stop to get further instruction about what to expect ahead.

My Guide and Me

Pressing on over the gravel and dirt and rock, occasionally glimpsing at the canyon and quickly returning focus to the strain of my self-imposed task. I was just over halfway through the ride, my group no longer waiting for me at the stops, Luis and I partners.

My inexperience with the bike endured during the most arduous part of the road.

“Stand up on the bike. It won’t hurt when you hit the bumps,” he said. 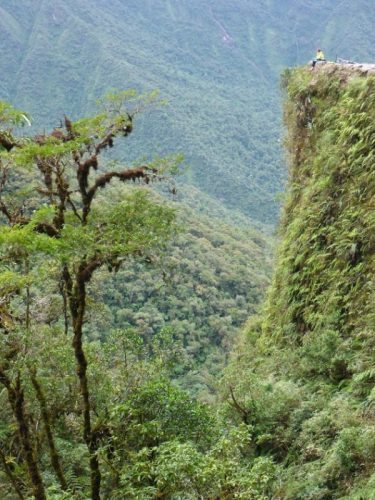 “I don’t feel like I have control if I stand up!”
“Pick up your speed! It’s a smoother ride!” he called.

I picked up my speed, loosened my grip on the brake and called out, “Better?”

“Well, now you don’t have any control!”

The patient Luis followed alongside me as I slowly wrangled the bike around curves and through mud-filled holes, twisting my way down and around the cavern.

Racing to the Finish Line

Close to half an hour from the end of the tour, I had my first and only fall. It was more of a topple, a tumble. The back tire skidded on a pile of gravel, wet from a trickling waterfall, and I fell onto a patch of tall grass on the inner side of the road, a mountain towering above me, bike at my side.
“Are you okay?” Luis asked.
“I’m fine.”

I was fine, lying in the damp grass that cooled my overheated face, waiting for my breathing and heartbeat to resume their normal rhythms. I lay on my side resting for about five minutes and turned to see Luis’ look of concern as he watched a woman, in the fetal position, on a stretch of grass, to one side of “Death Road”.

Out of concern for his obvious concern, I gathered the strength that was just slightly above baseline and continued. The steepest portion was the end and so, wincing at every rock bump and press of the brake, I silently repeated a resolution to start going to the gym when I returned to the States.

I joined the others waiting for me at the finish, coming to an exhausted, hard-won, controlled stop.

The macabre name, “Death Road” may well be a bit of marketing for enthusiastic tourists looking for an adrenaline-filled ride. For others of us, it’s a challenge to be met and a unique way to experience the wonder of the Bolivian Amazon.

Experience “Death Road” with Ride On Tours, in Bolivia. 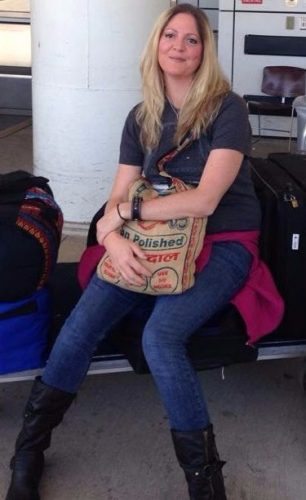 Elizabeth Dickinson is a former literature teacher turned solo traveler. She has been exploring Latin America for the past few years as well as the world of travel writing. She lives in Evanston, Illinois.